I’ve recently set something aside for a scheduled “breather”. It wasn’t anything related to anything I’ve talked about here before, but has been taking up a lot of my time - I’ve been forcing myself to not think about anything else (in terms of out of work things) too much until it’s done to not get distracted. It’s been easier than I thought - usually I can’t stop thinking about all the potential things I’d love to learn to make, but tunnel vision ensued.

Anyway, I thought the scheduled time out would let me just relax and enjoy some actual doing-nothing time for the first time in two months. But that hasn’t been the case. I’ve been drawing things on napkins. [caption id=“attachment_47157” align=“aligncenter” width=“300” caption=“The napkin”] 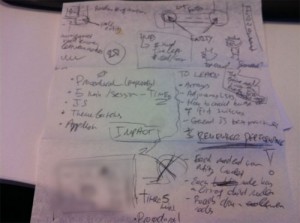 This morning I realized just how many napkins and random scraps of paper I toss out that look just like that. And really I can’t even read what the heck I wrote on a lot of this thing. Seriously - I have no fricking idea what some of this says. I was mostly asleep and it was the middle of the night. I woke up to this near my couch and had a brief “wtf is this” moment. I mean, I remember the gist of what I was writing but when I come back to this a couple of weeks from now I’ll have no fricking clue what most of the scribbles mean.

The idea itself isn’t new - it came to mind a couple of weeks ago, but I’ve put it on the backburner as mentioned above. While going into ‘break’ mode it’s kind of coming up more and more. I’ve mentioned bits and pieces to a couple of people whose technical advice I value in terms of coding this thing, but nobody knows the full concept yet. I guess the next step is to start speccing it out. Those who know me know I’m a sucker for documentation. I love reading, writing, proofing specs and making sure everything is clear. I think it stemmed from needing specs to test against. However, I’ve started to realize why developers are often so lax with documenting their stuff - I know I want to do this properly, but I also just want to get to coding the darn thing to get something, anything working.

Maybe I should force myself to shelve this until after GDC and make myself take a time out in terms of anything non paid work related. Watch a movie without thinking about something else for once. I think the downtime could be good as I’ve been noticing myself getting a tiny bit more tired each week, kind of like burning into reserves. But then an idea comes along or I learn something new and the energy levels are back up again. In general I don’t think my brain has been “off”/in relaxation mode except for when sleeping for a while. And sleep has been…well…sparse. Work isn’t suffering - I’d never let that happen - but my sanity might be :). Running has been helping.

Anyway, thinking about brainstorming made me really curious about how other people brainstorm their stuff. And then I ran across this: http://gamestorm.tumblr.com/

Which has been awesome to peruse. I love seeing the different approaches people take to developing their ideas. You always learn so much from just observing how others do things - it’s pretty amazing to see how people’s minds work through sites like these.