This is going to be  two-part post about both A Game of Snails and running (and Sweden!)

A Game of Snails

I took a few days off of A Game of Snails, but it’s coming along pretty nicely overall. The last week has been set on setting up the database. You can now save users and snails to the database, load a player’s snails when they log in, etc. Up next I just need to start saving a player’s snail jars (players can buy more jars with virtual currency  to be able to house more snails). The most daunting upcoming task will be migrating the server to a proper host and setting the whole thing up in a live environment.

The next immediate task, however, will be to set up a rudimentary racing system. Players should be able to look through a list of open races (or maybe even create their own) and enrol their snails into one. The race would run when enough snails have been registered by different players. For the time being the winner will just be whatever snail has the highest speed, but of course the final method of calculating the winner will be a bit more advanced, relying on things like weight, endurance, aggression, etc.

A Game of Snails - debug view[/caption]

The weather in Stockholm has been warming up and getting really nice for running. I still misjudge what the temperature is going to be when I go outside - sometimes it looks like it’s warm, but in reality I should’ve worn a heavier jacket; other times it looks freezing, but is actually too warm. Not only that, but it can vary a lot during the course of one run. I’ve been running near the water on Södermalm and the wind speed and direction seem to change every 2km.

Anyway, last Friday I ran 10km around the island at lunch and it went better than I thought it would. Then I went for two sets of 5km on Sunday and another 5km on Tuesday.

Sunday’s run was meant to be another 10km, but I stopped at the 5k mark. My calves were burning, it was windy and hot at the same time, and I just figured that maybe I was trying to fit two 10km runs too close together after not doing this distance for so long. So I sat near the water being all pathetic and then realized that I get to run in one of the prettiest cities I’ve ever seen (the prettiest after Kyoto) and darn it, I was going to finish this 10km. So I ran another 5. I was still a little disappointed at the end because it wasn’t a straight 10km run - there was a break inbetween - but at least I didn’t give up for long.

In other news, I signed up for the Midnight Run that takes place on August 17 (3 days after my Birthday, and 3 is my lucky number!)  registered in group 3A, which means I need to finish 10km between 50 and 55 minutes. I should be able to pull it off…I hope. 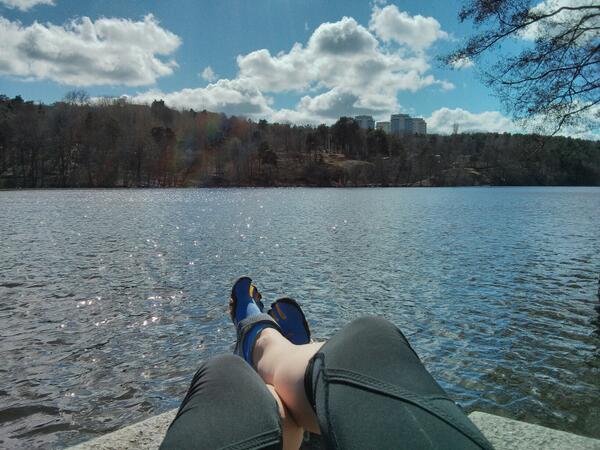 Sweden is getting prettier and prettier now that it’s warming up. Today is a public holiday, so we went for a nice walk around the city. Whereas before the city seemed very huddled away from the cold, now the streets are packed. I have heard before that people get really active here during the summer. I saw people in running outfits everywhere. There were a few gatherings, what looked like a protest, and to my surprise lots of stores were open despite the holiday. Let’s just say my “healthy eating initiative” didn’t go so well today as I devoured banana and blackberry pancakes (which I made!), an ice cream, a “vanilla heart”, and 1/3 of the most delicious fish wrap I have ever had in my entire life.