Glastonbury: getting there and the town

The first time I’d heard of the Tor in Glastonbury, it was as a result of reading a fantasy book as a teenager. Enthralled by the myths and legends the book described, I did some reading and learned that the legends did not just exist in the world of the book. I knew I wanted to visit since then.

I’d since started self-publishing my own fiction, and the nagging feeling that it was time to go back to Glastonbury in preparation to write something about the location began to build. But I was afraid that my memories of the place were not entirely accurate, or that I would miss important nuances when incorporating the place or the people into my stories.

It was time for a research trip.

I originally started writing my notes in one post, but it quickly grew way too long to be sensible. So I’m going to split this up into shorter posts, starting with this one: getting to Glastonbury and general impressions of the town. Subsequent posts will cover the Tor, Chalice Well and the White Spring, the food, the people, the abbey ruins, and the Rural Life Museum.

Mostly these will just be note-dumps for myself. I will not put all of my notes from the trip here, especially when it comes to some of the people I’ve spoken to. I’ll gloss over interactions, but some of the stories they’ve told me are not mine to retell.

The overall experience is something I will be thinking about for a long time. Glastonbury, especially Chalice Well and the Tor, always feel very special to me. For all of the other adventures you can find in Glastonbury, these two landmarks are the reason I am so fascinated with the place. When I am on the Tor, I feel a certain stability and calm that is difficult to describe or recreate anywhere else. When I am in one of the sitting nooks in the Chalice Well gardens, any thoughts of time, or how long I’d been there, or what my plans are for the rest of the day, disappear and I find myself fully present with the wind, the plants, and maybe a good book.

All of the fascinating myths and legends about the fairies and King Arthur and Gods and Goddesses aside, there is something very special about these two places.

Used my SAS points. Luckily, I happened to book the trip just days before the SAS pilot strike and subsequent bankrupty announcement. If my flight out was within this time, I think my flight would have been cancelled. The flight back was with SAS Connect, which was not impacted by the strike. 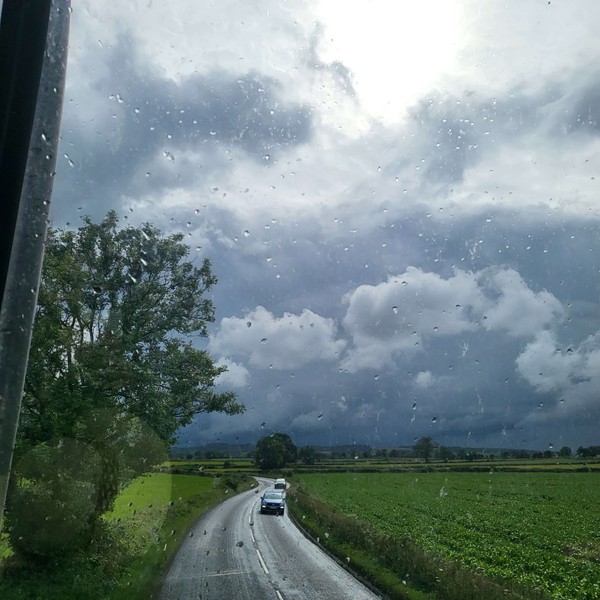 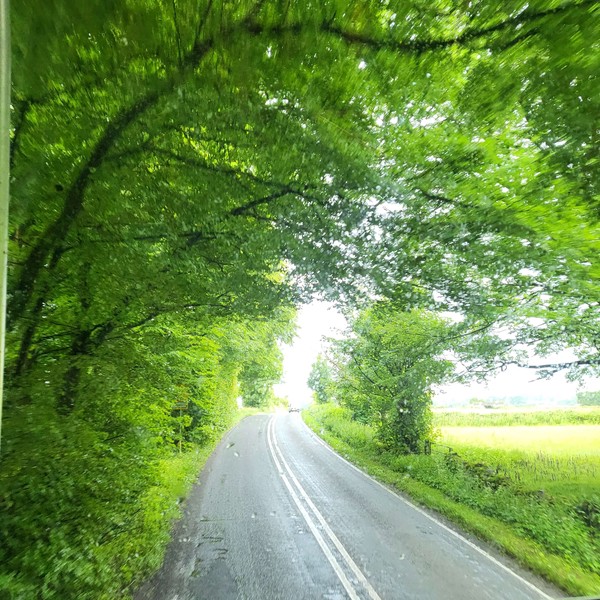 It was so hot in Stockholm that I foolishly thought it might be similar in the UK and brought a sunhat.

I did not need a sunhat.

By the time I got to my AirBnB it was pretty late in the evening. I’d left at about 6:00 Stockholm time and arrived at about 18:30-19:00 local time. I went out for dinner, getting my first glimpse of the town.

The town has a very New Age-y atmosphere. I am conflicted about this for reasons I’ll elaborate on below. Glastonbury tends to attract people who are into spirituality, crystals, psychedelics, sound healing, and all the other things one might associate with mysticism. The fantasy of it all is partly what attracts me to it, and I’ve always been drawn to these things myself albeing in a somewhat skeptical way. 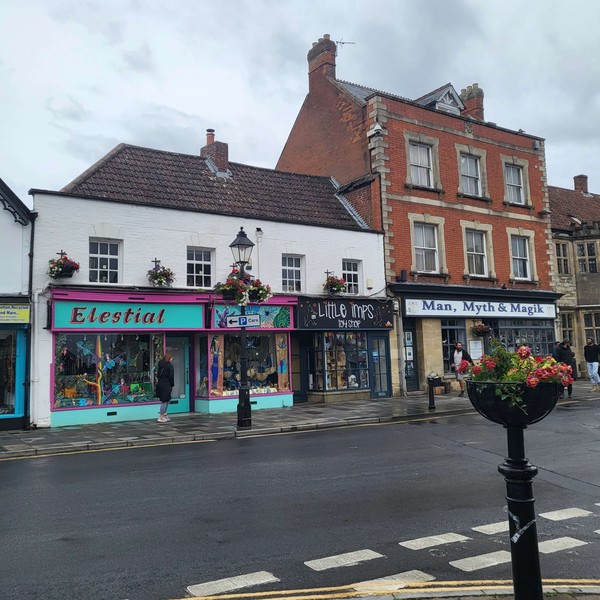 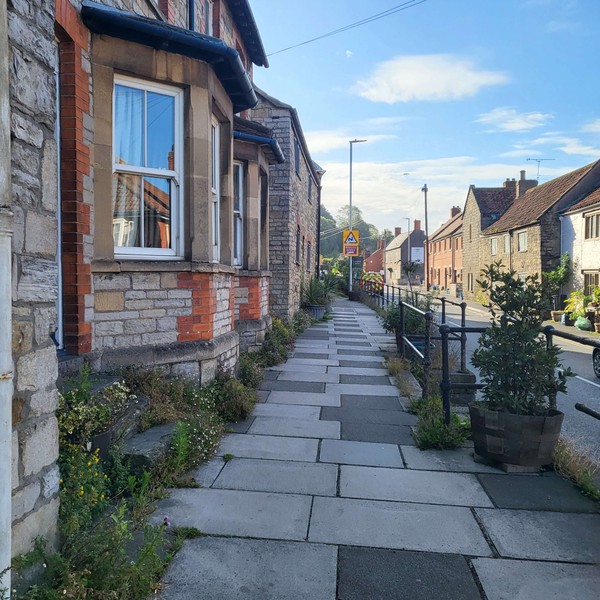 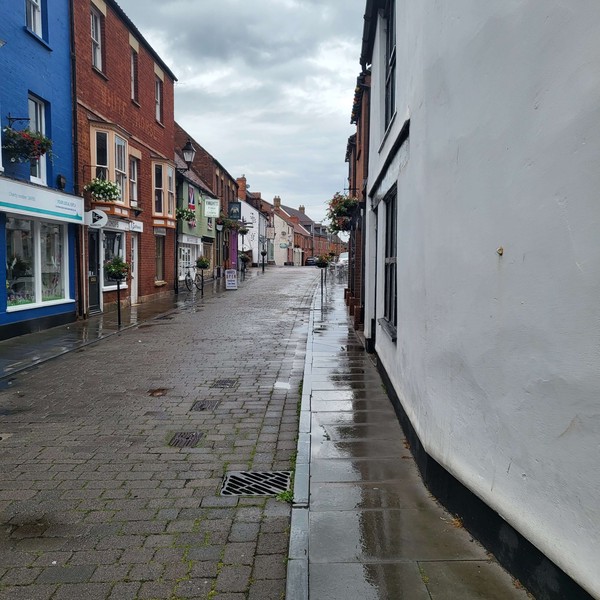 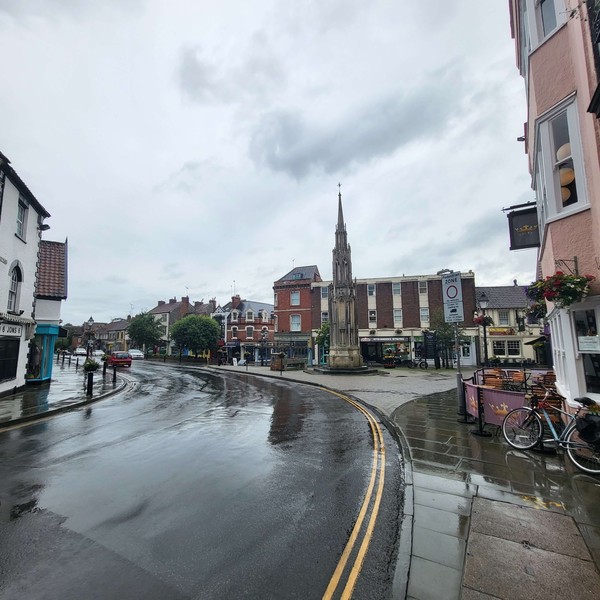 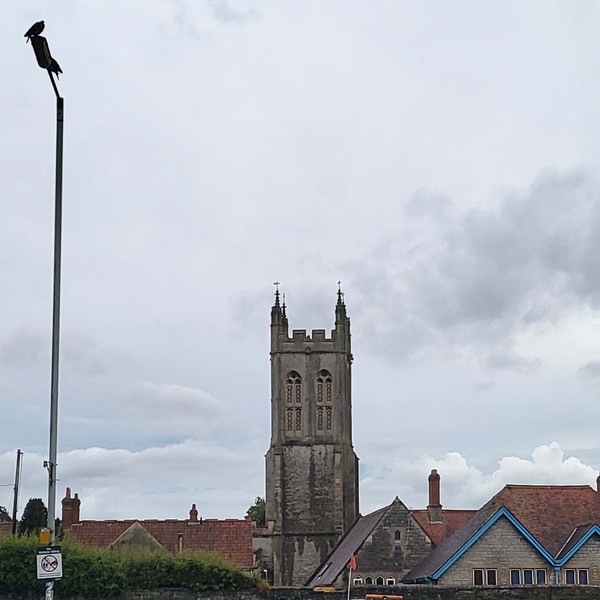 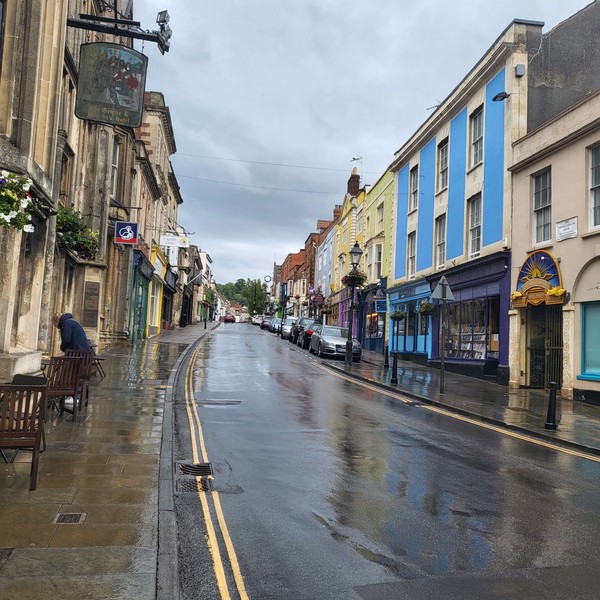 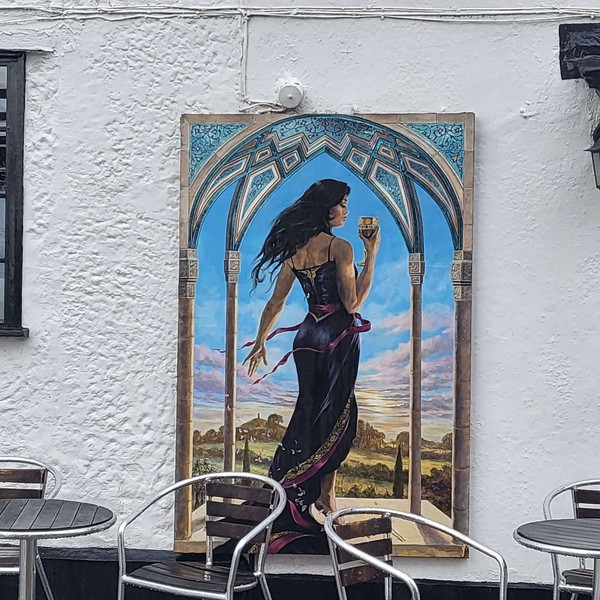 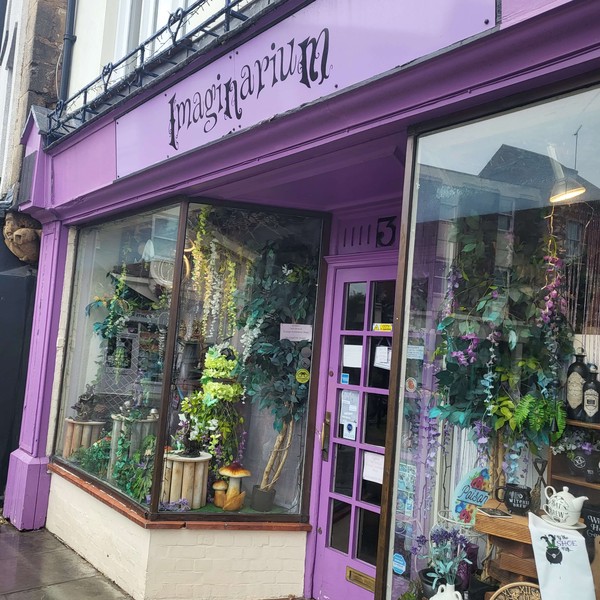 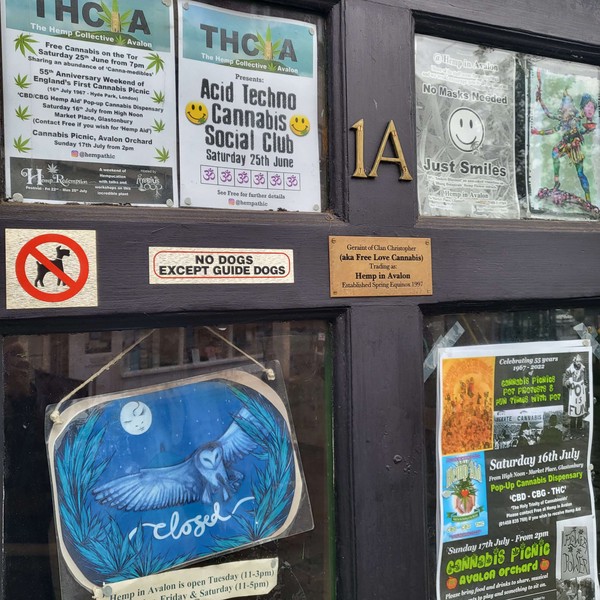 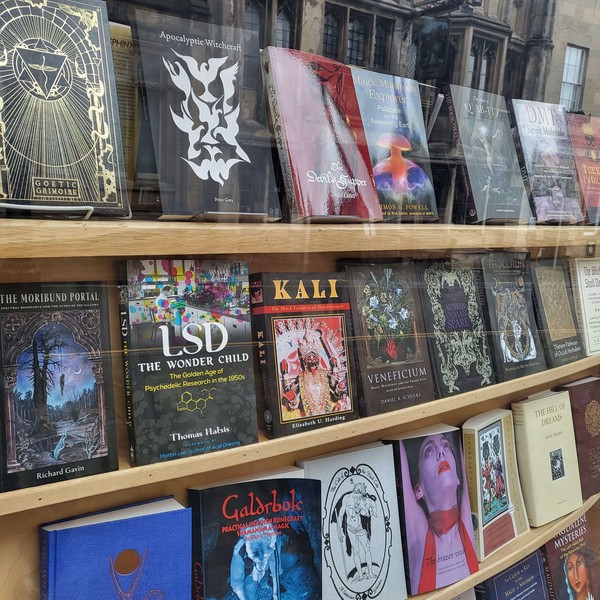 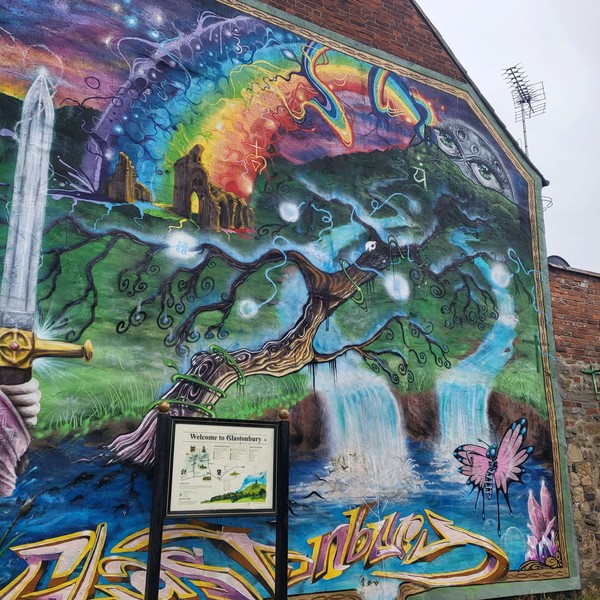 One thing that has fascianted me about Glastonbury is the range of people attracted to the place, and the spiritual and religious history of it. Pagan legends and stories of energetic ley-lines crossing on top of the Tor coexist with the site of what used to be one of the largest and most powerful monasteries in the UK and legends of the Holy Grail. Along with the Tor and Chalice Well, in my opinion no trip to Glastonbury is complete without a visit to the abbey ruins: a massive outdoor museum right in the middle of town.

Due to its spiritual significance, Glastonbury attracts a certain type of visitor, and capitalizes on that. It is up to each visitor to keep a good head on their shoulders and distinguish what it is that drew them to this place really from the various distractions they will find on High St.

With so many different types of wares and services on offer, you will find yourself looking at storefronts advertising every type of psychic reading or healing imaginable and to be honest many of these things just sound like they’re taking advantage of tourists’ gullibility. Alternatively, it could be thought of as catering to the very clear demand.

Colorful storefronts sell a huge variety of goods: from handmade eclectic jewelry and really high quality stuff to something they probably ordered from some wholesale warehouse to sell to unsuspecting visitors, to painted rocks.

I have heard similar sentiments from two people I met on the trip, one who was passing through for a while and one who has lived in the town for several years. Both seemed to not really be into the spiritual side of Glastonbury and talked about the town from a slightly more skeptical perspective. They told me of a sense of fakeness in some aspects of the town, as well as a darker side involving (intentional or not, I’m not sure) exploitation of visitors coming in hopes of turning their life around or being healed in some way.

For me, beyond the shallow New Age facade lies a rich history, powerful nature, friendly people, and some really fastinating landmarks (and vegetarian food!). It’s just important not to have a filter when it comes to all the surface attractions, and take the time to look into which parts of this place feel the most intersting to each of us. For me personally, this has always been the Tor and Chalice Well. For others it may be the abbey ruins or some other part of the town. 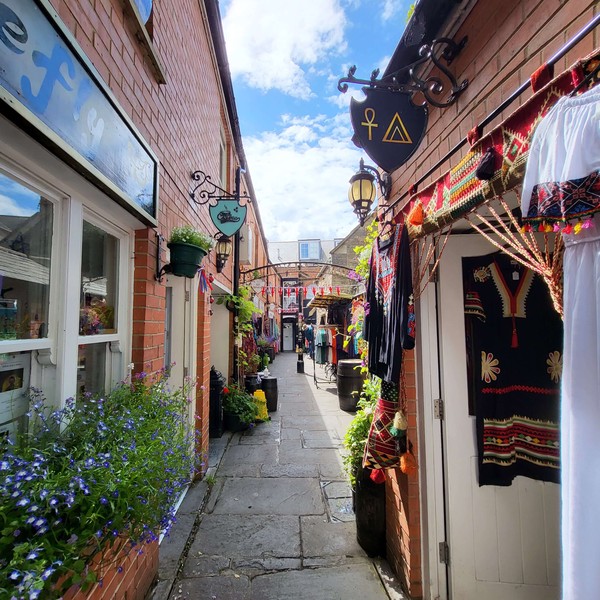 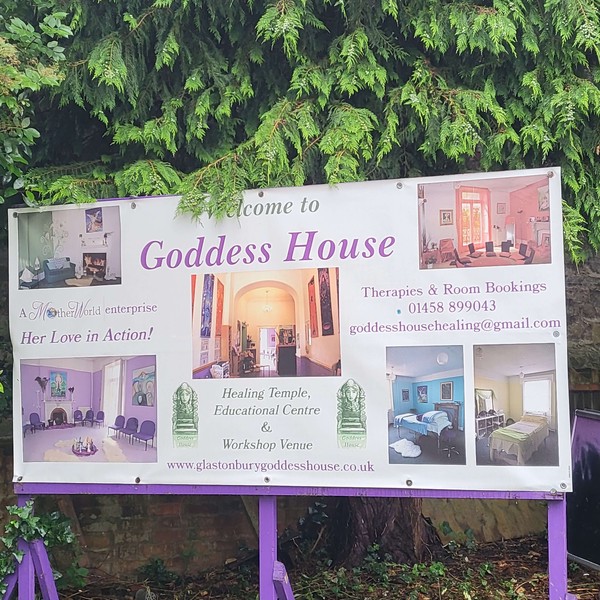 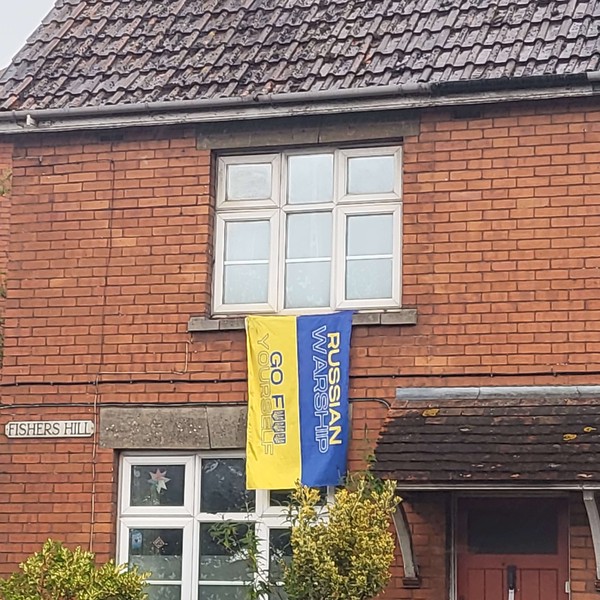