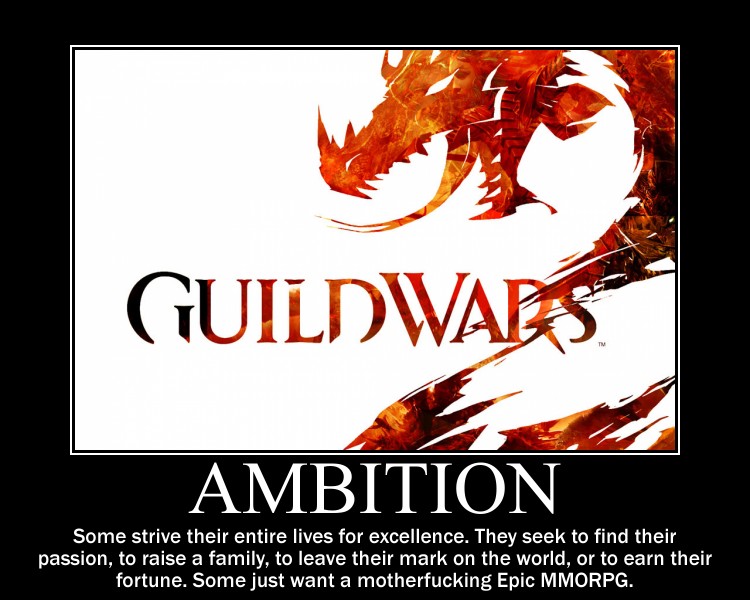 I’ve been thinking about different game genres and what draws people to prefer one over another. What are the distinctions that make someone enjoy one type of game more than the next? I figured I’d think about each genre separately and define what makes it fun for me and why I think people in general might be drawn to it. Originally I was going to dump an overview of thoughts on all genres in this post, but I’m finding myself mulling so much over each one that I’d rather take my time and write about them separately. And what better to start with than my all time favorite type of game - MMORPGs.

I was tempted to bring up MMO addiction here and how some of the following can tie into that, but decided to purposefully avoid the topic. It’s another subject for another post and I’d rather wait until I can dedicate enough time to discuss it properly.

This is a general brain dump on some of the things that I think distinguish the enjoyment a player experiences in MMOs compared to other types of games (from observation, discussion, and personal experiences).

So many factors go into the definition of fun. At the core I tend to think of “fun” as a mix of the balance between challenge and reward and mastery through repetition, but of course there are layers upon layers of characteristics that are combined together to make something fun and a million different ways - and theories - to define them.

MMOs are my favorite genre, followed closely by RTS. What is “fun” in MMOs? Specifically - which fun parts are different from fun parts in other types of games?

The universe must go on - persistence

Aside from the mix of challenge and reward (which is so difficult for MMOs especially to get right for reasons I might talk about later), I think fun in MMORPGs is largely about social interaction, immersion, and sometimes escapism. An MMO, to me, seems like the closest you can possibly get to a “real life” parallel world. You can play Fallout or Bioshock or even DXHR (which I loved), but you know that at the end of it when the game is done it’s done. You’re alone in a 3D world created solely for you, full of AI centered on you, playing through a story where you are the only hero. MMOs, on the other hand, are far more persistent and humbling. Suddenly you know you’re not the most important thing in the universe and that the world doesn’t revolve around you. You know that all of those other people will be there regardless of whether you’re playing or not and that this world is evolving with or without you. Suddenly you feel kind of small. And you like it.

Social interaction on a range of levels

Unlike other multiplayer games, MMOs promote social interaction on a range of levels that can potentially simulate a depth and variety similar to what you may experience in real life. From shorter term glimpses of a player who keeps popping up in the same cities as you or temporary party arrangements to long term guild-mates, allies, and adversaries.

And then there is of course the competitive aspect. You’ve realized that you’re a small fish in a big, big pond. You want to prove yourself and stand out from all the other fish. This is why you’ll never find me on a PvE-only server, or why you’ll often see me rolling PvP-specific characters in Guild Wars. Pitting yourself against other people is, for some of us, much more fun and dynamic than pitting yourself against NPC AI.

Even the PvE side of an MMO encourages competition by comparing achievements, armor, explored areas, even time played. And I love the PvE side, too. But MMOs have a habit of introducing crap quests and half-assed stories and this needs to improve (depending on the kind of MMO, anyway. I say either make it a good story or don’t have a story at all). Storytelling in MMOs in general is tricky because you’re accounting for so many people going through the experience at the same time. Positioning you alone as the big hero of the world, in my opinion, would break suspension of disbelief (“Who are they trying to fool? There’s a guy right next to me who’s hearing the same thing right now.") But when a story is good the PvE becomes immersive, social, cooperative play.

Part of you wants to master this gigantic world and find your perfect place in it. One of the most randomly memorable snippets of interaction I’ve had in any game was years ago. It was short and crude and made me feel genuinely proud of contributing to an awesome team: “All the monks want her panties.” (Uh…they really didn’t mean it like that.)

When living in the U.S. and playing Guild Wars: Prophecies I stumbled into the primary GvG team for a high ranking PvP guild climbing up the ladder. This is before spiker builds of that day got nerfed - the entire team consisted purely of air elementalist primaries running the same build with two Monks on the side. We’d coordinate our target, then hit with the same attack when the guild leader gave the go over Vent (You had to learn to consistently hit within milliseconds of the signal).

At one point we were getting beaten hard. Other guilds were catching on and running anti-spiker builds and then ArenaNet caught on and nerfed spikers in general. The other guilds started picking us off, starting with our monks. And usually we wouldn’t even really need that much healing, but with our newly crippled build without the two monks we just couldn’t get through each cooldown and hit fast enough. I was one of the only half monks on the team with res, so ended up running around and resurrecting our fallen monks on an ongoing basis while the others kept trying to spike. This may have lowered our damage output a bit, but it also saved our butts a few times until our guild leader created a brand new Earth spiker build (as opposed to the nerfed Air build).

The point is - as you won and lost together you formed this sense of long term comradeship with your team (not just your guild, but that particular team). You did your best to contribute and felt genuinely proud when you helped the team. When I eventually left the guild to move to European servers due to the relocation to Australia it was a tough decision because of the attachment I formed with my guild.

I don’t see myself getting the same sense of teamwork and accomplishment in a quick WC3 multiplayer match - when it comes to forming long term bonds in games, nothing beats an MMO.

At the end of the day, nothing beats slaughtering someone in an arena with your life draining sword-wielding Necro/Warrior sporting a build you compiled, tested, improved, and proved worthy to yourself, your teammates, and your (ideally dead) opponents either. And you know as the winners and losers exchange the customary “gg"s at the end you’re thinking or feeling something along the lines of_ “In this one moment, I’m a slightly bigger fish than you. And the pond is looking just a little bit smaller from here."_