First I got this tiny thing for my desk. It works well for what it is, but needs to be refilled several times per day and is really only good for the space around the desk. It was not enough for my apartment, but I’d consider using it as a supplementary solution for my workspace. On the other hand, I later learned that it is an ultrasonic humidifier, which would not be my first choice.

This one had no hygrostat and while I think it worked OK for my bedroom, I also had no hygrometer to know for sure. It needed to be cleaned religiously, with yellow gunk building up in the water reservoir quite quickly. I think this is normal with all humidifiers, but I’m too lazy to deal with it. The noise level was also a bit too much to sleep with for me.

But the worst part was Rigel. He has a thing for water-based devices. He’s destroyed many a water fountain in his life. A couple of times he knocked this thing over and created a pool on my wooden floors. As a result, I had to keep it either in the sink or the bathroom where it would be safe to spill, or have it in a large plastic bucket in my bedroom. That kind of sucked. I gave up on it after the first season.

Another issue with it for me (later) is that it is also an ultrasonic humidifier. This means any minerals and crap that might be in my water would be going into my air and I’d be breathing them in. This is also what can create that fine layer of white powdery dust that you sometimes see in the vicinity of these humidifiers. I decided I’d prefer an evaporative humidifier, instead.

Advance warning: I did not actually end up getting it.

I ordered the Dyson Pure Humidify & Cool, thinking that despite its egregious price point I could:

a. budget for it and b. live in peace knowing it is self-cleaning also could also purify some of the neighbors' cigarette smoke wafting in from my balcony (which I keep open during summer)

Honestly, I had already looked into the Dyson PH01 several months ago. At that time, it was out of stock everywhere. All the review sites had positive reviews. But when I dug deeper about why they were so darn hard to find I learned that Dyson PH01 owners had been plagued by issues to the point that Dyson stopped selling the Pure Humidify and Cool. They seemed to mostly be related to water getting into the lid of the pump column, which holds the logic board. Imagine that: a device built to hold water being unable to properly hold water.

I was disappointed, because the feature set of the actual thing seemed perfect for my lazy needs. It had a deep clean mode and everything, and also apparently uses UV light to (to some extent) sanitize the water before it goes into the air.

So when the PH01 came back in stock, I thought “Great! Dyson fixed it!” and ordered another one. But with a feeling that this was my impulse buy habit talking (which I’ve been aware of and curbing for years now), I did some more digging and called Dyson. I asked if they had fixed the “pump issue” (which is what I knew it as) and if the new device would be the fixed version. The customer service rep confirmed that yes, the devices with the fixed pump column were the only ones they were sending. Yay!

But I still had nagging doubts. I did more digging that evening…and found this thread with a breakdown of the new pump column.

It didn’t increase my confidence…I ended up calling Postnord and asking them to return the package to the sender. They were extremely helpful. I then confirmed with Dyson that just returning to sender would process it as a refund and the customer service rep confirmed and was also very helpful.

I would still consider investing in one of these later, after a few more iterations and after some long-term users confirm that it is actually a high quality device now. For now, it’s not something I’d spend >7000 SEK on.

This is where I am now. George sits on my bedside table. Rigel seems to feel no need to mess with it because the water tank is invisible (facing the wall). 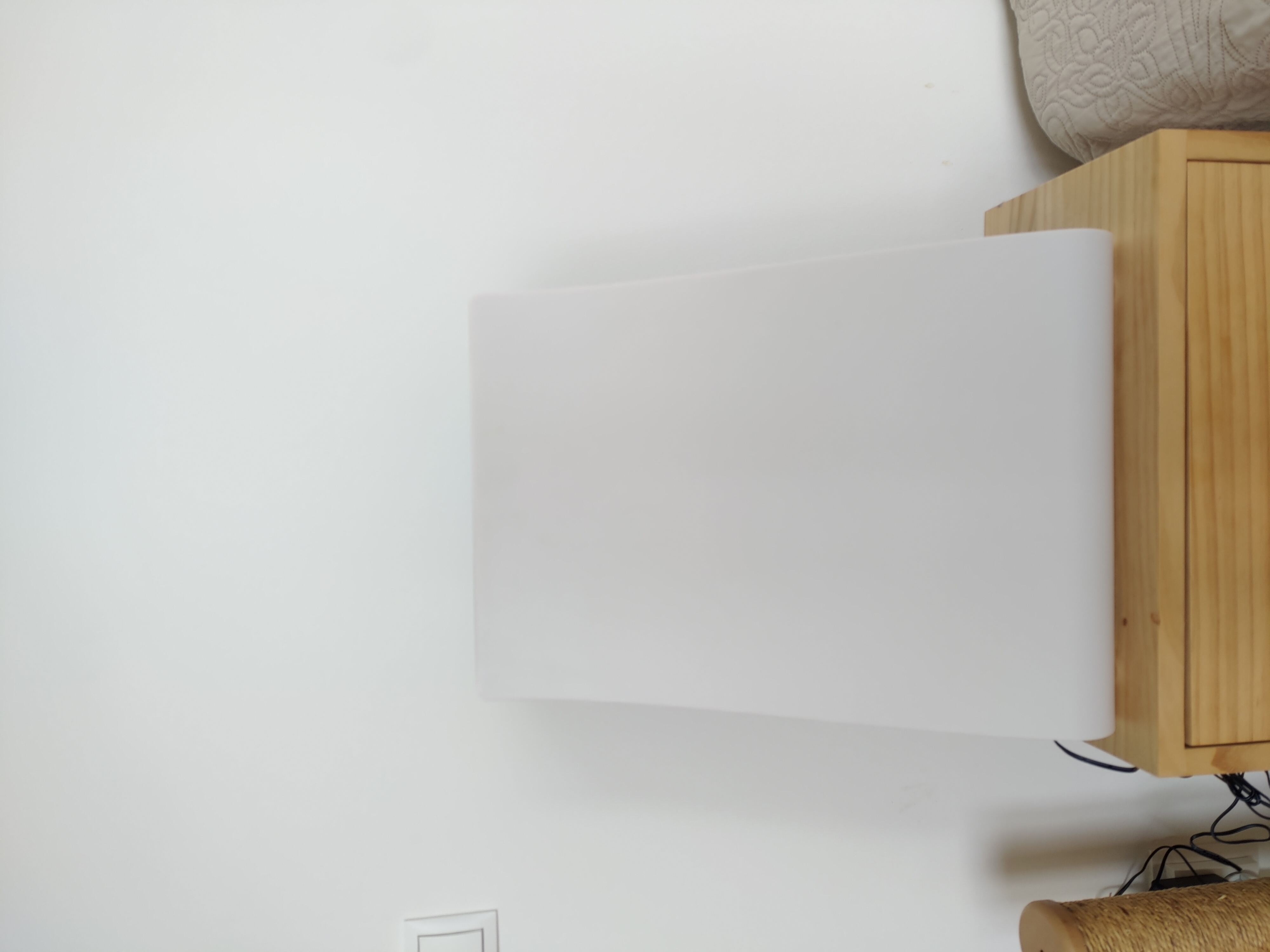 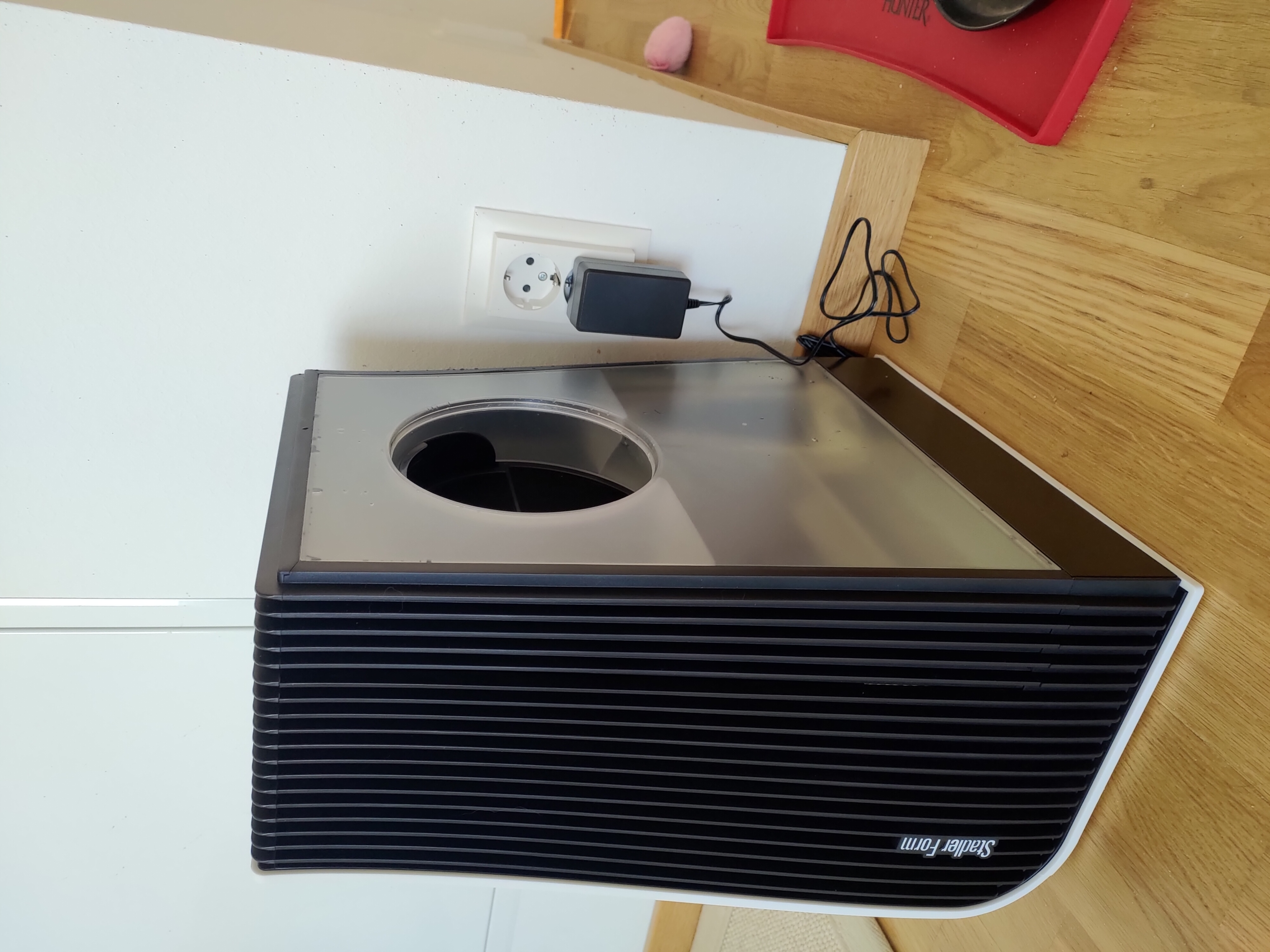 The device is not marketed as an air humidifer, but as an air washer. The difference? Meh. I don’t know if it’s just a marketing gimmick, but apparently an air washer sucks in dirty air and puts it through rotating discs in water that capture dust, pet hair, and other impurities. As the air is “washed” within these discs, it also absorbs water which is expelled by a fan from the top of the air washer. It is meant to be a sort of purifier and humidifier in one, but without any kind of filter (so the purification expectations must be lower than a proper air purifier).

The reason I got this thing was not so much for the air cleaning part (although that sounds nice, too), but for the fact that it is meant to be very easy to clean while also humidifying the space.

Stadler Form George has dishwasher-safe components for everything that holds water except for the tank. The tank can be rinsed with citric acid solution weekly, and the recommendation is to also put the other components in the dishwasher weekly. If there is no dishwasher available, George has some sort of self-cleaning mode which basically runs the motor with citric acid solution with the fan off, cleaning all the parts that way. No manual cleaning of the components should be required. The set of rotating discs can be dismantled to wash each disc individually, too.

The device comes with a hygrostat, so I can put it at different target humidity levels (four to pick from) or a continuous mode. I can also adjust the fan speed, or set it to auto mode to meet the target humidity level. It has a very non-obtrusive interface. No sceen, just buttons with tiny blue LEDs at the top which can be dimmed to be less disruptive at night.

On fan speed 1, the device is comfortable to sleep with to the point that I actually like the quiet hum it produces. It seems to help me fall asleep. Sometimes you hear a faint glugging sound as more water goes down from the tank into a reservoir, but it’s very quiet and doesn’t disturb me.

I think I could also sleep with it on fan speed 2, but so far I haven’t needed to. When I bought the device my apartment was at below-30% humidity, but for a few days after the humidity has been quite high (today over 50%!) even without running the humidifier. I still turn on George each night on fan speed 1 and notice that I wake up with less dry skin, but for now I’m not sure how much of that is George’s work and how much is generally decent natural humidity.

The first test for George will come tomorrow, when I will need to do my first cleaning. I’m hoping to just pop the relevant bits in the dishwasher along with Rigel’s water fountain (the one he hasn’t managed to destroy and actually seems to enjoy using). I’ll need to pick up some citric acid solution from the hardware store at some point, too.

But the real test will be this winter, when the air can hold less water and the heat turns on. Will it be able to keep my apartment comfortable? I love humidity; if it were up to me I’d be living in 70% water all year round. Expectations will be high.