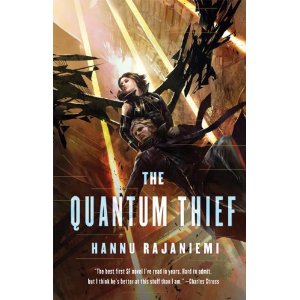 [/caption]I finished reading The Quantum Thief (affiliate link) by Hannu Rajaniemi, but this will not be a book review. Mostly because I need to read it again before I can honestly feel confident about reviewing this thing. I feel that even though I grasped most of the concepts of how the world works and the individual technologies in use, some of the main parts of the storyline went straight over my head.

Example 1: I still have no idea what the heck Jean and Mieli are trying to steal. This whole book was about them stealing something - what are they looking for? Do they even know? How does Jean know where that they have to go to Earth at the end?

Example 2: Who the heck is the king. Jean’s twin? A splinter of his consciousness? So is he actually Isidore’s father and not Jean himself?

Example 3: What the heck was it that Jean found in Schrodinger’s box?

This is the first book in a while that’s gone pretty much completely over my head and probably the first real hard sci fi book I’ve read, but I am now intent to one day go back to it and figure it out. For now, I’m moving on to Feed by Mira Grant.