C and I had our introductory pistol shooting session at the Midland Indoor Shooting Range this morning at 10am. I originally purchased the session from OurDeal, getting the session for $69 down from $180.

Advance warning - I am still extremely unfamiliar with gun terminology, so if I use any words incorrectly here - don’t shoot me.

The guy who was running our session and teaching us (this was not a group thing, so it was just us two and the instructor) was really cool and explained everything very clearly. He said that basically today we’d just be having some fun and he would be doing most of the grunt work - eg loading the guns. The first things he taught us were some general safety rules for the place, like what to do if the doorbell (which sounds like an alarm) rings (keep shooting, finish the clip, then step outside for a second if nobody else gets the door). It’s a small place, so he had to go to look after the door a couple of times, but this wasn’t a problem for us. He then taught us the basic procedure for picking up, shooting, and putting down the pistol:

We both picked it up pretty quickly, C immediately being a bit better with his grip than I was. He held the gun a bit straighter with less jiggling than I did, but after picking it up a couple of times I got the hang of it.

Our teacher had us do a “dry run” with each gun before actually trying to shoot the target, to get used to the weight, trigger, and general feel. Our target was set 10 metres away (apparently the Olympic distance is 25 from what I remember him saying).

We got to try shooting three pistols during the session:

This pistol had a red dot scope attached to the top (pardon me if I’m using the wrong terminology for it, I can’t remember what it was actually called). We just looked through the scope (non-magnifying) and tried to line it up with the bullseye 10 metres away. We shot three clips each, C going first.

The first clip the teacher asked us to shoot five rounds into the top target and then five into the bottom (one target sheet had two targets positioned vertically). C did really well in this one and I did…OK…I did better with the bottom target because the top was a tiny bit too high for comfort for me I think (if there is such a thing). I’m 5'4 and C is 6'1.

The second time he told us to intermittently shoot the top target, then the bottom. I think I did a bit better here (though again better with the bottom).

The third clip he turned it into a bit of a competition between C and I. He got each of us new targets (up until then he was actually putting round stickers over the bullet holes so that we could re-use the target). At the end of our go he scored our attempts. C’s target was on the top, but before the instructor stapled mine on I asked specifically if mine could be stapled to the bottom. I think he instantly understood why and said the middle would probably be the perfect height for me, so stapled it just between the top and bottom.

C got 94/100, but I totally suddenly got into the swing of things and won with a 98/100! Our instructor said we did really well and looked pleasantly surprised, but I’m betting he left out “for amateurs” from that sentence :D This is when he also said that they didn’t usually like to admit this, but women tend to be better shots. 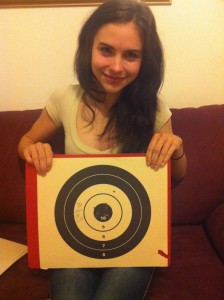 What I liked about trying the .22 semi-automatic pistol

I think this was my favorite pistol of the three we tried because there was no recoil whatsoever. Because we had 3 clips to go through with this gun, it let me kind of gauge how to best aim for the bullseye. My first clip I kept trying to keep my hand at the bullseye, but couldn’t get it stable enough to hit it consistently. My second clip I started to hold my breath before pulling the trigger and instead of physically trying to keep my hand as rigid as possible and then shooting I aimed the best I could, accepted that there would be some sway, and instead tried to pull the trigger when the holographic red dot passed over the bullseye during the sway. I’m not sure if this is the right way to do it, but it seemed to let me hit it more consistently.

The next one we tried was the .357 revolver with half-power ammo. This one also had the red dot scope. This pistol was very interesting because after C had his turn, the instructor told us about flinching. Before we started he said there would be “felt recoil” with this gun. So it wouldn’t jerk our arms back, but we’d definitely feel it kicking back in our hands. When C was done with his set we saw that the bullet holes in his target pretty much went from top to bottom, with 2 hitting the bullseye. The instructor said that everybody instinctively flinches in anticipation of recoil and that the really good shots are just the ones who flinch the least. Shooting lower and lower with each round is apparently a very common pattern because each time we kind of expect the recoil and flinch slightly, throwing ourselves slightly lower.

I guess it worked, because I apparently did pretty well! (Again, probably “for an amateur” :D) 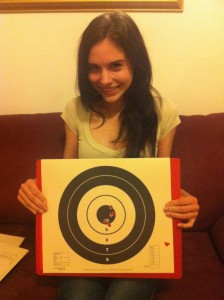 What I liked about trying the .357 revolver

The blast of flame that came out of the barrel with each shot! That was awesome. I didn’t even mind the recoil. I did definitely feel it, but didn’t think it was too bad. What C later told me is that the instructor and he were looking at each other and laughing behind me (well, C was laughing, instructor apparently just looked amused) each time I fired a round because the gun wobbled like crazy in my hand each time!

The last pistol we tried was the 9mm semi-automatic. This one didn’t have the red dot scope - we had to line up the white dots with the target all by ourselves and it really showed in the results. We didn’t do very well. I still managed to do better than C, but only hit the bullseye twice and the rest were just all over the place.

Apparently this is the pistol that the police use. The recoil was the worst for this one and C later told me that apparently after the first shot I fired the instructor stepped up behind me with his hands outstretched, afraid that he was going to have to catch me! I never actually felt off-balance, but there was definite wobbling there on my part. 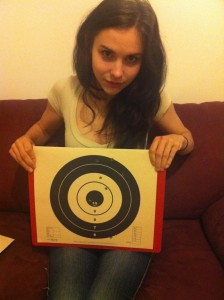 What I liked about trying the 9mm semi-automatic pistol

Nothing. Just kidding. I think it was a good experience to try it. It also showed me just how easy the red dot scope was making it for me with the other two guns.

We both really enjoyed the pistol shooting session and might go on to take proper lessons. My actually doing OK made me re-appreciate getting laser eye surgery a few years ago. With the vision I had back then I wouldn’t even be able to properly see the bullseye 10 metres away, much less aim at it properly. It’s really reminded me to take care of my eyes. To do: eat more carrots.

The rest of the day

After the pistol shooting session C and I went to Harbour Town and then had an awesome burger lunch at Burger Edge. Which was awesome. It’s just been an overall awesome day and an excellent end to this weekend :) 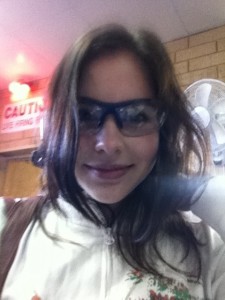