In my previous post I wrote about rethinking racing (aka ripping out the existing racing system).

Today I got most of the work done on that. There is a lot left to do, but as of right now:

This has taught me that my way of estimating the snail’s position (between its last current position and target position) is nowhere near accurate enough. The snail that was coming in first visually actually finished 2 seconds after another snail in the race. I’ll need to work on this. Here are some screenshots:

Why did this snail turn around?!

The last racer, straggling behind: 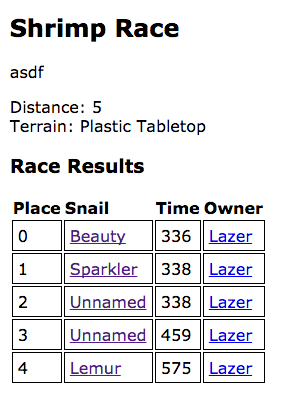