Let me tell you, I don’t go to the Perth CBD that frequently, but when I do it’s usually to relax after a long week with a cup of coffee from Streeton’s or some Russian Caravan tea from The Merchant. Unfortunately, lately my trips to the CBD haven’t been that relaxing or enjoyable.

Over the past few months, Perth CBD has been overrun by coupon pushers. I usually go for an hour or so on Fridays, and on my last three or four visits I noticed them everywhere. They flock to passers-by like flies and trying to push coupons and free newspaper down my throat. What is this? Can’t people shop or walk through the CBD in peace anymore, without being hassled by someone pushing a fracking voucher in their face every five steps?

And the most annoying thing is, I like to look and smile at people when I walk. Call me weird or creepy, whatever. I like to people watch, too. I have noticed myself getting into the habit of actually avoiding looking people in the eye because in the back of my mind I am afraid that that next person I happen to glance at is going to promptly take that shred of attention as a cue to try to sell me something with a fricking coupon or “AMAZING OFFER!” So there I am, forging straight ahead with a blank expression on my face (because you know, showing emotion seems to attract them).

Now, I’ve only been in the CBD after 5pm recently and can’t say if they’re there all day or if they only descend at night on Fridays, but this is not OK.

For example - I was meeting my friend Ellen for dinner this evening. We usually meet at a particular spot at the entrance to Perth Underground train station. Normally I stand somewhere near the entrance, but either in front of one of the gate dividers or slightly off to the side so as not to block anyone’s passage to and from the station while still staying visible. I know I’m not the only one who does this.

Tonight I got off the train, came up the escalator and naturally shuffled into my usual spot to wait. But wait! Right beside me was a guy with a stack of Guardian newspapers. It felt awkward, standing right there watching him trying to grab people as they enter or leave the station (after having to decline one myself, of course). When I glanced around for another spot to stand, I saw that there was a coupon peddler on each side of me and at pretty much every pole or other potential waiting place near the station. Perth Underground must be their prime hunting ground. I wonder if they brawl over their chosen locations. They were like seagulls, chirpy and loud and jumping forward at people as they passed to offer them whatever it is they were being paid to distribute. I might find that type of behaviour tolerable (dare I say cute?) when a seagull does it, but never a person.

Going to the city for a coffee after work is becoming increasingly annoying. I, for one, don’t go into the CBD to get hassled by a bunch of peddlers. Yet lately, this has been an unavoidable part of the great Perth experience that we all hold so dear to our hearts cough.

[caption id=“attachment_40859” align=“aligncenter” width=“224” caption=“Human seagull with a stack of newspapers right at the entrance to Perth Underground. “] 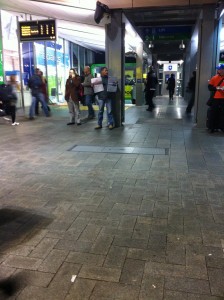 [caption id=“attachment_40861” align=“aligncenter” width=“224” caption=“Note the newspaper guy on one side and his orange counterpart on the other."] 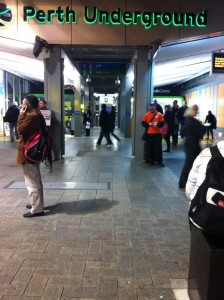 [caption id=“attachment_40860” align=“aligncenter” width=“224” caption=“A bunch of newspapers stacked up near the entrance to the station."] 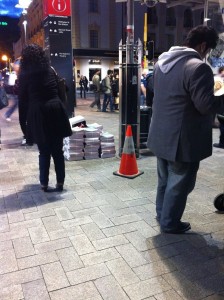 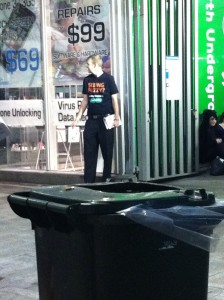