Update 3, Nov 2 2015 (PM): Well, it’s been…strange. First, it seems my account was finally deleted by Livecoding.tv (thank you!) After being up all night with libel posted all over it, hours after Jamie Green (the other Livecoding co-founder) and Sam Altman (Y Combinator president) replied to the Hacker News thread claiming they were trying to do something, something finally happened. I have heard nothing from either of them since their original comments and am not sure exactly what spurred the removal of slander from the profile and its eventual deletion. I know some other Livecoding users quit and had a discussion with the CEO in live chat also.

The account was then recreated, seemingly by a third party under the same username. They originally replaced a modified version of the libel on the profile and eventually changed the description. It seems to be someone else who has a problem with Livecoding.tv and maybe wanted to use this whole saga to their advantage.

First, the CEO of Livecoding has again emailed me this morning and, almost unbelievably, tried to lie yet again. This was before the deletion was done. Our email conversations consisted of this (messages go from bottom up):

He then went to the Hacker News thread about this and started posting defensive copy-pasted comments telling people they were cowards for not listing their names. After this there was more of pretty much the same on Twitter - copy-pasted replies to tweets about Livecoding.

Some responses to this weird and confused behaviour and this unbelievably bad response to the situation on HN have been borderline, and in some cases over-the-line, cruel. As I mentioned in a comment on the thread, I did not write this post to make a joke out of anyone or be cruel to a person who now seems like they might be unwell. I am the last person to defend how Livecoding.tv has handled this and don’t plan on censoring any accounts of my experiences with them, but in my opinion it is important to stay mature in these interactions and not become a complete asshole.

Anyway, at this point with my account deleted (though username now taken by someone else, but they have now removed my name from the new profile) I think I’ve gotten the best possible outcome. It’s obvious that Livecoding still has no interest in treating this in a professional manner and that they have a lot of growing to do in terms of their approach to communicating with their users, but as long as my details are off of that site that’s all I can realistically expect at this point.

I really hope this post will not need any more updates.

Update 2, Nov 2 2015: The text on my profile has just been changed to “Marked for removal from database”. Perhaps they fixed their “cron job”.

@elgruntox mentioned on Twitter that that he just got banned also and actually managed to have an exchange with the CEO:

I’m not sure where the first line is coming from about any kind of information that they were “doing migrations” (I have had no such communication). I did have communication that my account was deleted as mentioned in the original post below, but that turned out to be false. My videos were already deleted because I deleted them myself one by one before they changed my password, put in a redirect back to home on my account, and updated my profile for me.

Anyway, it seems they removed the libel and replaced it with a more generic message. I guess we’re just back at square one now.

Update 1, Nov 1 2015: It looks like Livecoding have now taken the liberty of updating my profile for me, claiming I am “spamming them” after this review got some attention: Archive.is link.

I guess writing an account of your experience with their site is somehow considered spam to Livecoding. How professional of them.

A few months ago I figured I’d try streaming my development of SnailLife (or parts thereof). I considered Twitch, but ended up going for a site called Livecoding.tv because it seemed smaller and more obscure. My main goal for streaming would be to keep myself focused knowing someone may be watching - I didn’t actually want to build any great audience for myself as I didn’t want to build up any kind of expectation of streaming, plus I knew that my streams would probably just be really boring. It was more a motivator for me to not procrastinate and browse Reddit or HN and focus on my work.

So I set up an account on Livecoding and did my first stream. A few people actually came in and asked questions about the project, which was cool. I got a message and/or email from someone from Livecoding asking if or when I was able to stream, or what my streaming schedule might look like. I said I would try to stream whenever I could, but with a busy job, a sick cat, and life in general streaming was simply not on my list of priorities so I could not commit to a schedule.

I streamed a few more times and then life got in the way as expected (ie my cat almost died) and I stopped. Once every few weeks I would get another message from Livecoding (outside of their usual automated newsletter) asking what my streaming schedule might be as well as saying that they want to get more female streamers on the platform. Basically emails like this:

“Where have you been? ;) We plan to heavily increase the number of female Livecoders so if you have ideas on how we could achieve this, let us know. Could you invite other female coders you know to Livecoding.tv?”

“Hey Yeliz - This is Michael, founder of Livecoding.tv

I like your snail game. I want to use you to inspire other women and young girls to get excited about software development.

How often are you on Livecoding.tv?”

Each time one of these came in I kept explaining that with everything else going on streaming was not my highest priority and I would not commit to a schedule - so in reply to “how often?” the answer was basically “not often”. At some point it got pretty frustrating to keep receiving these emails, but whatever.

A couple of weeks ago I got another email from Livecoding. “Viewer Feedback” - with “tips” on how to get more people to view my stream. Including handy items like: 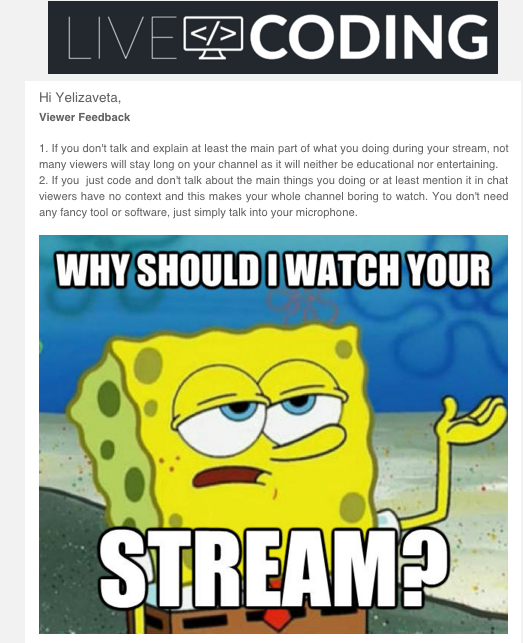 This looked like an at least partially automated email, but I am not sure to what extent because in the few streams I did do I chose to not talk and just code, and maybe interact with people in the text chat when they had question. This was sort of the thing that led to my not feeling like being on Livecoding anymore. I just felt there was too much recurring pressure to stream when I clearly communicated that I will not be streaming regularly. Not only that, but I never wanted to stream to get a big viewership or cater to viewers - I wanted to stream for my benefit, to keep myself focused. These unsolicted “tips” indicated to me that Livecoding clearly did not seem like the right channel for this anymore.

I decided to delete my account until I can work with Livecoding’s expectations and actually stream on a regular basis as they kept asking me to do.

So far so good. They asked why I wanted to delete the account, I explained, they said they’d do it soon. The next day I asked for some clarification on when the deletion would actually take place:

This was met with silence.

7 days later I sent another email, now feeling a little bit frustrated. It has now been over a week. Here is the exchange that followed:

My last question was, again, met with silence.

At this point I spoke out publicly on Twitter and got the following reply from Livecoding’s Twitter account - of course, my account would be deleted “soon”. I let them know that their last “soon” was over a week ago with no clarification of when their “soon” is. Guess what answer I got. That’s right. None, as usual. 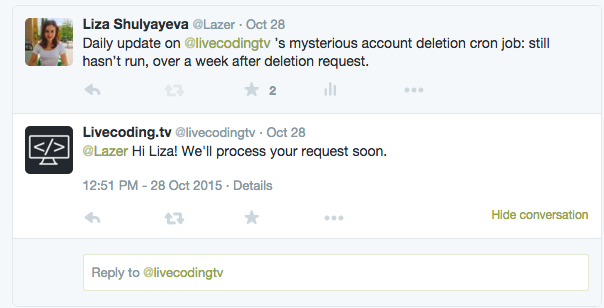 So I started posting daily updates about the status of my account on Twitter. The situation at this point was frustrating and the incompetence was laughable. I updated my Livecoding profile to highlight the problem. I mused if posting some inappropriate content in my profile would encourage them to finally delete my account.

I didn’t post anything bad in my profile yet, but just the mention of it seems to have kicked some gears into motion, because I received this email this morning, from Michael the great Livecoding CEO.

I guess that cron job had a lot going on. But hey, excellent! Something happened! All is right with the world! We’re all good!

However after checking the site I saw that my profile was still there…I was no longer able to log in at least. But judging by past experience and the fact that my profile was still visible I was suspicious and tried to change my password, just in case. Well what do you know - it worked. A password reset form was sent to me. Now I was getting angry. This seems to not just be a case of delay or plain incompetence - the Livecoding CEO just lied about deleting my account. I wonder in what world changing someone’s password amounts to an account deletion - Livecoding’s world, apparently!

Now angry at the blatant lie, I posted on Twitter about this and replied to Michael’s last email:

He (or someone from Livecoding, there is no name signed anymore) quickly responded with the following:

I’m not sure who “me and my friends” are. I think he was talking about my discussions on Twitter. We certainly haven’t been spamming, a couple of people have simply been discussing my issues with getting my account deleted. My response was:

The seeming incompetence Livecoding management is just plain laughable at this point and I am still not sure what exactly their problem is with deleting an account. Are they just unable to do this? Is their system this crappy? Judging by their lie claiming my account was deleted when it was not it seems they actually want to keep my data and profile on their site for some weird reason. But why?! Why list instructions on how to delete your account on your website and then not honor them?

Of course there are sites that outright refuse to delete all of your information. Livecoding was not one of those sites - Livecoding repeatedly promised to delete my accout “soon”, then went on to claim it deleted my account when my account was still there, visible, and with a resettable password. The way they have handled this in such an unprofessional, misleading manner makes them seem totally untrustworthy and extremely shady in my mind.

I remember Michael’s request in one of his spammy manual emails from earlier: “Could you invite other female coders you know to Livecoding.tv?"

Dear Michael: sure I can! But I won’t. I will instead warn other coders (not just female, since you may not know this but we don’t gather in gender specific female herds), but anyone interested in streaming their projects. Livecoding’s unprofessionalism, continued pressure to stream, unwillingness to let go of your data despite really loving the word “soon” is simply not worth the hassle.

So, Livecoding/Michael, here are some unsolicited “tips” from me to you this time:

To use your preferred phrasing from before, processing a support ticket to delete a user account should have been “nothing complex”. I still do not know what your problem is with actually doing this.