The past week has been absolutely crazy - crazy busy! And one of the main things I was working on was my entry for the first iinet TopGeek Top 20 challenge. The task was to invent something awesome, create a text document or PowerPoint presentation about it, and make a video pitching your invention.

I worked very hard on my TopGeek invention and came up with Maximum Dog, a canine zombie protection suit. I won’t talk too much about the details of the invention because guess what! You can see it all on the Maximum Dog website, which I quickly threw together on the last night to make it easier for people to view rather than downloading my PowerPoint with the linked animation file and all.

By far the most consuming part of the invention for me were the illustrations. First I sketched out the different parts of the Maximum Dog suit on paper, scanned it all in, and then colored it all in Photoshop. I was struggling to get that armor-plate type feel to the magnesium alloy shell, so after a bit of experimentation decided that manually selecting each piece of the suit and shading/highlighting/etc it separately made the pieces look more disconnected, which was what I was going for. Mind you, you can see I’m no great artist, but I tried my best and am pretty happy with the results.

The main thing I was worried about was the video. In the TopGeek Top 20 private Facebook group, I saw that quite a few people seemed to be focusing on their videos as the primary part of the presentation. I didn’t think of the challenge this way, putting more focus on my PowerPoint, but I guess they were right - the videos is really what iiNet intended to distribute. Crap! I was in trouble.

But it all came together! Thanks to the amazing and wonderful:

Ryan Angus for helping me with the video. He was not only an awesome zombie, but also has mad editing skills with Adobe Premier Pro and making things hilariously awesome in general among other super-human traits! In fact, he should change his legal name from Ryan Angus to Genius Video Man.

Troy and Leo from Wrongtown for recording the “MAXIMUM DOG” Crysis nanosuit voice for me. Leo’s voice was already awesomely close to what I was going for, but with some Garageband tinkering I got it even further! Also they make awesome music and you should check out their new song here.

We find out who passes on to the next challenge on Friday. There were so many awesome inventions that I’m not getting my hopes up or expecting anything, but even if I don’t get to continue on, it’s been a lot of fun so far. 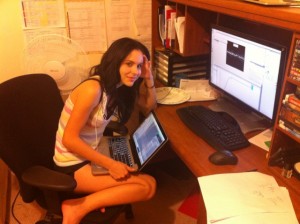