It’s summer!!! Swedish weather has gotten so nice over the past week or so. It’s still a bit uncertain and there are cold days, but there have been a few unbelievably nice days where not being outside feels like some sort of crime.

Gastropoda is coming along. I’ve slowed down a little to enjoy the weather and think about a cryonics story I’ve had in mind for a while, so I’m just chilling out and working on it in bits and pieces. I’ve decided to make it stricter in terms of realism. Breeding, training, etc should be based on what’s possible and observable in the real world.

On Sunday @locust9 and I are planning to take a bike trip to Lake Mälaren. It’s about 40-50km away by bike, so it’ll be a day trip. I think I’m more excited than he is - I’ve been wanting to take a longer trip for a while. I even got a Brompton T-Bag (har har) to be able to carry our stuff on the adventure. I was deciding between it and the C-Bag, which looks much cooler and I believe is better for daily use. However, I only had the budget to buy one and decided to opt for something with more storage capacity. The T-Bag can still roll up to the size of the C-Bag, but can also hold much more when required.

I’ve realized that not only does it feel much better to not carry stuff on your back while biking, but the bag also adds some stability to the bike when steering.

Tomorrow I’m going to find a physical map (or print one out) that we can take with us on Sunday. We want to plot a course that avoids as many car roads as possible, even if it might be farther to ride.

Adventuring and coffee with sugar…

Today is a public holiday and we went for a nice walk on Södermalm. I climbed another statue for my state sitting collection: 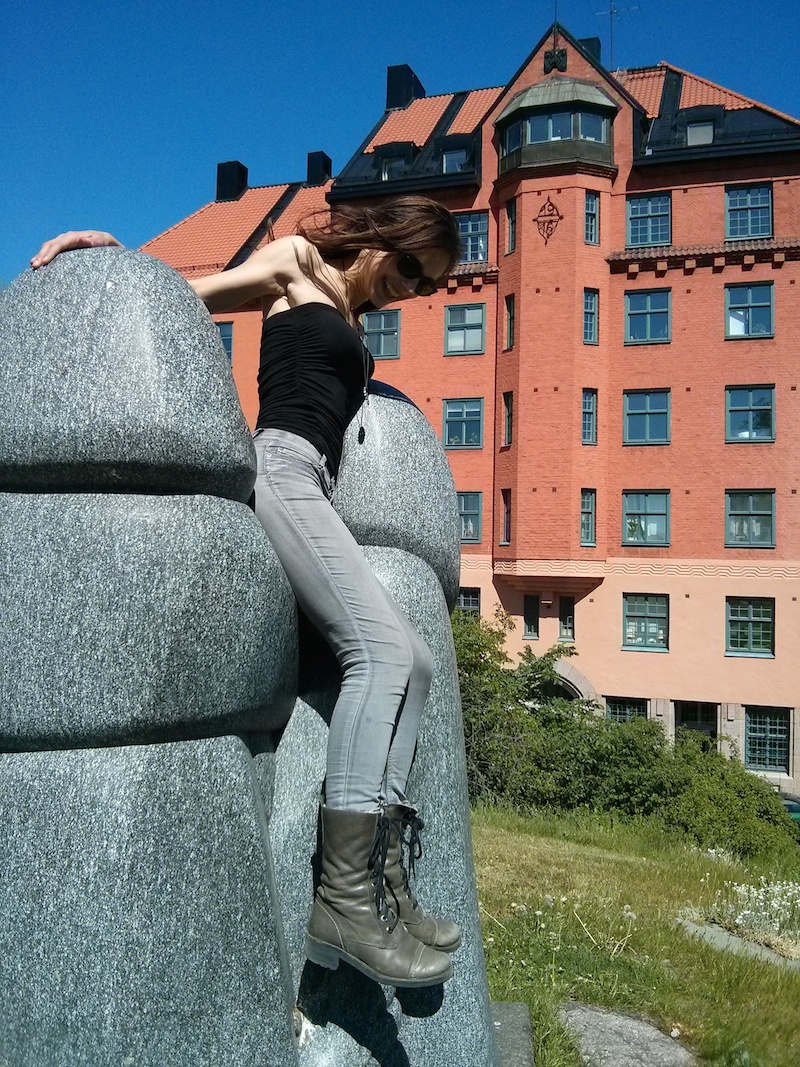 And found a confusing sign (I still am not sure if it was just missing a T or also had an extra H): 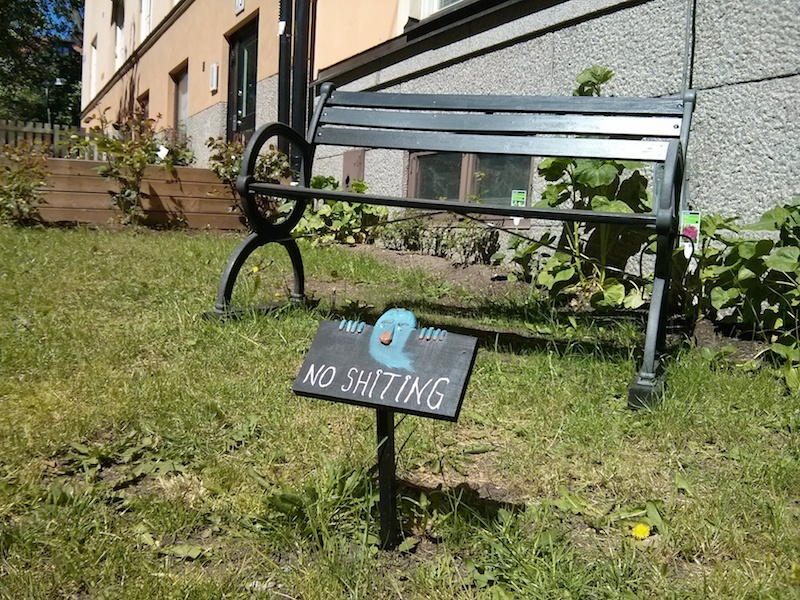 I have also recently discovered Il Caffe, which seems to be situated on what’s possibly the most hipster-filled street on Södermalm (near a store called Grandpa, where I constantly want to buy everything but end up buying nothing because I can’t think of a use for any of it). The street seems to be constantly filled with parked bicycles, some of which are quite weird looking. Last time I even spotted two Bromptons! There was also a dude with a motorized bike that sounded more like a motorcycle. It took him five minutes to start it up and rumble away. 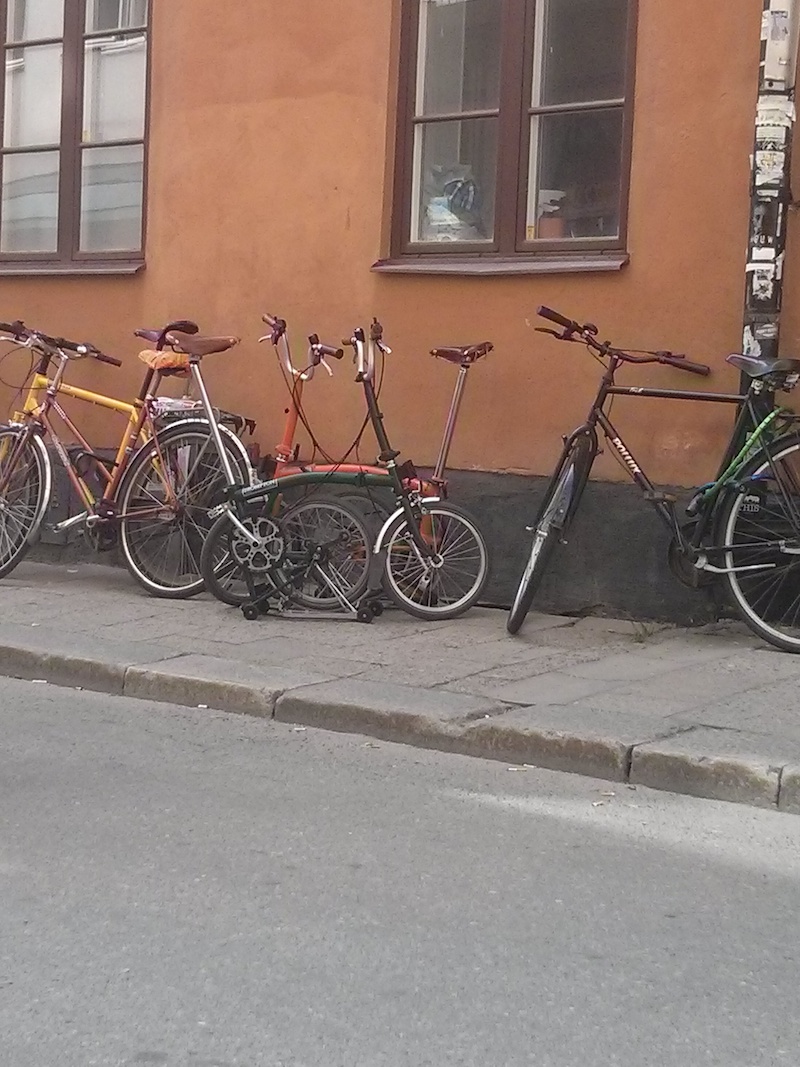 The inside of Il Caffe is large and really nice, but they’re confusing me with their coffee. Today they added sugar to my iced latte without asking. Is this common?! Twitter replies suggested that no, it’s not. I figured maybe because an iced latte isn’t a ‘proper’ coffee it might be more common for coffee places to add sugar to it by default. The dude was going so fast that by the time I realized what happened he had heaped in two teaspoons and was already pouring everything in. I would’ve felt bad about stopping him and having him make a new one, so I paid for it but didn’t drink it :(. Last time I came there the barista asked me if I wanted sugar in my regular latte. When I said no she said “Are you sure? It tastes great!”, but at least she bothered to ask and didn’t just dump it in!

Speaking of sugar - I no longer eat things with added sugar, or anything too sugary. I’ve been at it for a few weeks now. I did slip up yesterday (for the first time) by having a mango smoothie at work before realizing that those things are packed with sugar. Darn it. But that’s ok, it was delicious but actually tasted a little too sweet for me, so I don’t have to be afraid of falling off the wagon with renewed sugar cravings.

I decided to try to learn how to lucid dream. I already tried this years ago with some mild success, but it’s kind of fallen by the wayside. I guess it’s back to reality checks and keeping a dream journal now. The whole concept of being able to lucid dream regularly (or even every night!) sounds amazing to me. With games (especially MMOs and RPGs) we try to get into these fantasy worlds apart from our own, to make our characters fascinating imaginary versions of us. With lucid dreaming we could make stepping into these worlds even more “real” than playing video games. And we spend so much of our lives sleeping - why not learn to spend that time being “awake” in a whole other world?