C and I (and a friend) went to see Harry Potter and the Deathly Hallows: Part 1 at 12:05am last Thursday. I was so excited that I went into Big W that evening to find a robe and wizard hat. Unfortunately they had neither. Instead I went home with a Harry Potter wand, glasses, and some blue construction paper and star stickers to create my own wizard hat. C was embarrassed to be seen with me, but I let my freak flag fly and actually did wear my semi-home-made costume: 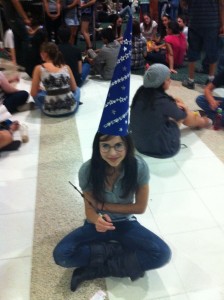 We got to the Hoyts in Southlands at 11pm last night and there was already a line. When we got into the cinema, it didn’t even look close to sold out - from memory there were more Imax tickets pre-ordered (I looked into going to Imax first, but every single middle seat except for the very front rows at the bottom were already reserved). We got pretty good seats, so I was happy.

Anyway, the movie itself was…good. I think. To be honest, I’m feeling a little indifferent about it. I was really excited to see this, but at the end I didn’t really feel anything at all about the movie. I mean, I didn’t dislike it, but I wasn’t thrilled with it, either. I have zero complaints about it. Maybe this is how Dexter Morgan feels (or not feels) about things all the time. It’s like it didn’t illicit any sort of emotion at all. Don’t get me wrong, there were very good scenes in the movie, and also quite a bit of humor, which I liked. [SPOILER] All the girls emitted a collective whimper when Hedwig died [END SPOILER], laughed at the funny bits, etc etc. The guy next to me got so freaked out at a couple of the scarier scenes, I had to laugh (he had a blanket with him and was clutching it for dear life). But at the end of the movie I honestly just didn’t feel anything about it. Maybe it just hasn’t fully sunk in yet - it was almost 3am by that time and I was tired, so I guess we’ll just have to see if any emotions surface about this one down the line.

One complaint I do have, and this is more about the series of movies in general, not this particular one, is Daniel Radcliffe. This is going to sound really shallow, but there is something very off about him. I realize that Harry was never meant to be the most handsome guy in the world, but Daniel just seems very weird, appearance-wise. He has those thin lips that creep me out when he laughs or scowls and his face seems “mushy”. I wonder if they expected him to age this way or if they expected him to turn into this super handsome Harry as Daniel got older. Are they disappointed about not having an attractive male lead, I wonder? I mean, this is Harry Potter - you want the main character to have at least some attractive features. And it’s not just looks - a lot of the time even if the actor isn’t physically handsome, as his character develops and through body language you can still feel attracted to him. I felt this way about Michael Weston in Burn Notice. I thought he was pretty ugly at first, but as I kept watching the series he just got hotter and hotter. Daniel Radcliffe? It’s like there’s nothing there for me to like. Emma Watson (Hermione) aged wonderfully and is completely gorgeous. Even Rupert Grint (Ron) has that symmetrical, unique, nice look about him - and he’s not conventionally handsome at all, but he still has it!

The other character I felt this way about was Draco Malfoy, who is played by Tom Felton. When I was younger and watching the first movies he was so fricking hot. Now he has that awkward “mushyness” in his face like Daniel Radcliffe. Does anyone else know what I’m talking about here or am I not making any sense with this whole string of thought?