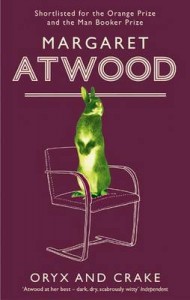 I finally finished Oryx and Crake by Margaret Atwood. The past couple of weeks have been so hectic with TopGeek, client work, and other projects that my reading was falling behind.

**The following post with my thoughts about the book will contain lots of spoilers,_ _including about the ending…which I found to be quite lacklustre.**

The book consists of Snowman’s life among the Crakers as well as his recollections of his life as Jimmy. **Crakers **are genetically modified versions of human beings, engineered by Snowman’s old friend Crake (back in his Jimmy years), whom Crake designed to lack the usual flaws of humans. For example, Crakers only live for 30 years (at which time they drop dead), have no fear of death, mate only when in heat (therefore eliminating sexual aggression), and are in general very naive, innocent versions of humans. Crakers are also designed to not possess a concept of religion or the afterlife - although this gets a little blurred down the line. They are also quite beautiful - all multicolored with big, bright green eyes and all with the perfect physique.

I found the parts of the book describing Snowman’s journey to Paradice (the dome in the compound where Crake did his work) to be a lot less interesting than his recollections of his previous life as Jimmy. I loved reading about how Jimmy and Crake met, the little signs that Crake gave off as to what he might be planning and the direction his thoughts might take in the future (though Jimmy didn’t recognize these until it was too late), etc.

Crake is really the star of the show in this book in my mind - Jimmy simply acts as a vessel for us to learn about a character who is dead and who therefore cannot teach us about himself.

Snowman’s adventures in real time seem almost pointless to me. Why not dedicate the whole book to Jimmy’s friendship with Crake, with just a bit of general explanation as to what’s going on now? I think the present would have been much more interesting if the Crakers were explored more than Jimmy’s struggle to survive and come to grips with what Crake had done.

What did Crake do?

Crake, a genius working at a very exclusive compound focused on developing a pill for everalasing youth, has his own lab in a dome called Paradice. He recruited his own scientists and his own security - he hast he run of the place. He’s the big fish. Crake’s job: create a pill (called BlyssPluss) for eternal youth, immortality. His secondary mission: create the perfect human being, a “display model” of sorts to show future parents the possibilities of genes that they can pick for their child. No parent would likely want their child to have all of the attributes of the Crakers; rather, they are meant to show all of the possibilities on hand.

Crake’s lover and assistant Oryx travels to the “pleeblands” (the areas outside of the secure, sanitised compounds, basically regular cities of today which are considered dangerous and contaminated in the world of Oryx and Crake) and distributes trials of the BlyssPluss pill to various subjects. Neither Oryx, nor Jimmy (whom Crake recruited to work for him), nor the scientists working for Crake know what is really in the BlyssPluss pill. In reality, Crake has laced the pill with what is later given the name of JUVE (Jetspeed Ultra Virus Extraordinary) - a deadly virus that rapidly makes the body disintegrate and shut down. When one night the news begins reporting a serious outbreak of an unknown virus occurring simultaneously all over the world, Oryx realizes from the specific locations being reported that she unknowingly assisted Crake’s destruction of the human race.

Prior to this, Crake had given Jimmy the antidote to the virus, the vaccine - under the pretence of it being a regular temporary vaccine to make it safe for Jimmy to go into the infected pleeblands.

People start dropping dead left and right, all over the world, at the same time. Basically, “Everybody’s dead, Dave”.

While this is all going on Crake kills Oryx (I suspect either to spare her from the torturous pain of dying at the hands of his creation or because he suspected that Jimmy and Oryx were lovers; perhaps a bit of both). Right before slitting Oryx’s throat, Crake tells Jimmy that he’s “counting on him”. Jimmy shoots Crake instantly after Crake kills Oryx. When Crake says that he is counting on Jimmy, I suspect he means both to take care of the Crakers (which Crake made Jimmy promise to do in case anything ever happened to him - something Jimmy didn’t pick up on as a clue at the time) as well as counting on Jimmy to kill him once he murders Oryx.

You get hints of the Crakers perhaps not following Crake’s ideal vision during Snowman’s interactions with them. The Crakers are curious about anything and everything because they don’t know what anything is. Because suspicion, fear, doubt, aggression, etc have all been programmed out of them by Crake, they take Snowman’s explanation for every question as gospel, no matter how nonsensical it actually is. However, Snowman must be careful when answering their questions because usually they simply trigger more questions.

So instead of offering actual true explanations for various things, Snowman has taken to inventing stories that satisfy the Crakers and don’t trigger more enquiries. Therefore Snowman spins tales that involve things like Crake talking to him through his broken watch, then turning into a tree with a mouth and other such things. Things are fairly easily explained away by the existence Crake (the Crakers, of course, do not know that Crake is dead. The death of their creator would shatter them). The Crakers know that Crake created them and begin to almost idolise Crake and Oryx as gods of some sort (although this is simply Jimmy’s observations from their behavior, we never actually find out whether the Crakers see Crake as a supernatural deity).

Towards the end of the book when Snowman is returning from Paradice back to the Crakers, he sees that they have made what they call a “Picture” of Snowman to communicate with him while he’s “in the sky” with Crake (the Crakers had deducted himself that Crake must live in the sky - Jimmy has never made this claim, but rolls with it to avoid more questions). He hears the Crakers chanting around their “Picture”, calling to Snowman. The “Picture” is in reality a sculpture of Snowman of sorts, which the Crakers built out of objects they found on the shore. Crake had intended for symbolism to not be something that the Crakers can even comprehend and claimed that if they start to associate symbols, it’s all downhill from there. Snowman muses that perhaps they have began to idolise him like they do Crake as they now believe he can fly. He corrects them by saying that Crake instead came down from the sky, for fear of them asking Snowman to demonstrate his flying abilities.

The other interesting moment in the book was when the Crakers tell the newly returned Snowman of the other humans they saw. This is a huge deal to Snowman as he was meant to be the last survivor, only alive because Crake injected him with the antidote to JUVE. They said that there were two men and a woman passing by. The woman smelled “blue” (the Craker females turn blue when they go into heat, at which point they mate with several males at once), so the Craker males assumed she was in heat. However, they say that when the males tried to woo her by approaching and waving their penises at her, she was fearful and the other human males became angry. It is no surprise that the woman smelled “blue” to the Crakers as humans, according to Crake, are perpetually in heat.

I’d love to have heard more about how the Crakers view the world; perhaps explore any cracks that have begun to appear in Crake’s design of his ideal creatures.

I thought Oryx and Crake by Margaret Atwood was a genuinely interesting book - some parts more interesting than others. I found some parts with Snowman’s activities in the present dull and unnecessary and wish that the book delved deeper into the Crakers' minds as well as into the mind of Crake himself. I also found the ending a little lacklustre: Snowman goes to find the humans who have passed through…and that’s it. On the whole, however, I thought it was a great book.

My next book on the list is World War Z by Max Brooks, which I started this morning. So far so good!