Right now in my snail stable it is 15.5 degrees Celsius. I don’t think I’m going to simulate building insulation, so without temperature control it would be about the same temperature in each jar (I may take humidity from the jar’s substrate into account, and have other items adding warmth or cold aside from temperature control gadgets). The user won’t see their exact jar temperature until they install a thermometer in the jar, and they won’t be able to regulate the temperature without installing a temperature controller. 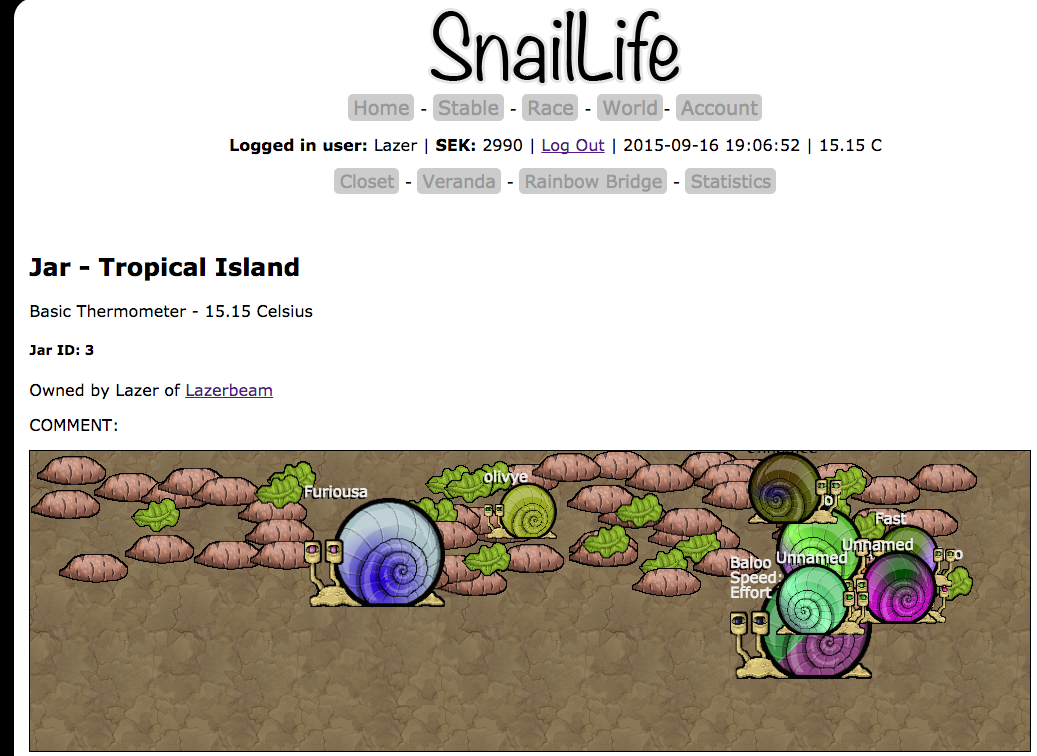 Snail jars have had temperature for a long time, but now that temperature is influenced by real life weather at the stable’s location. This will in turn influence the snails within the jar: their health, mood, etc (this last part is not yet implemented…well, it is only implemented very very roughly).

Different snails will adapt to live better in certain climates, and you will find different kinds of snails in different places. This way if you happen to physically be traveling the world you could hunt for wild snails away from your stable and find totally different patterns, colors, and traits.

Of course, this can only happen if you allow SnailLife to get your coordinates by using HTML5 Geolocation feature. Right now there is no fallback…I was thinking of falling back on location of IP, but that might make it easy for people to cheat and place their stables in rare locations. For now I think I might put you in a really boring part of the world by default when geolocation is not permitted…

Aside from affecting snail health and such in the future, temperature in a jar already affects how quickly consumable items rot. Things rot faster at a higher temperature.

Up next I want to think of a good way to vary snail types based on coordinates. There will be some manually set snail types that are available only in certain areas of the world if I want to make some super cool rare location (eg - get a special snail if you’re at the NASA headquarters!), but for the most part I want to create that variation automatically. I just have to think of a good way to approach this.