We went for a walk today and decided to go in the opposite direction than we usually take. We ended up in a suburb I think called Kärrtorp. The walk wasn’t very long, but certainly interesting! The weather was wet and gloomy, the path was more icy than expected, and we walked across a creepy-ass building. So yeah…this post is pretty much about the building.

So imagine you’re walking along this path. Trees to your left, rusted fence to your right with some more trees and some sort of field looking thing being constructed in the distance. The path is icy and you’re slipping and sliding while talking about some sort of stabbing or other attack you’ve heard happened around this area. Just, you know, for some light-hearted conversation. 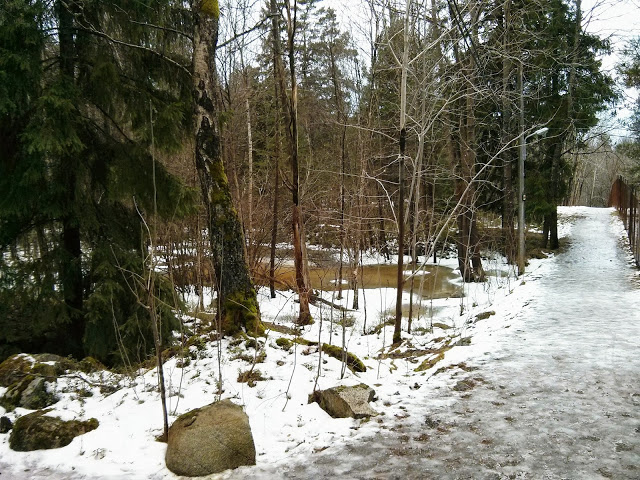 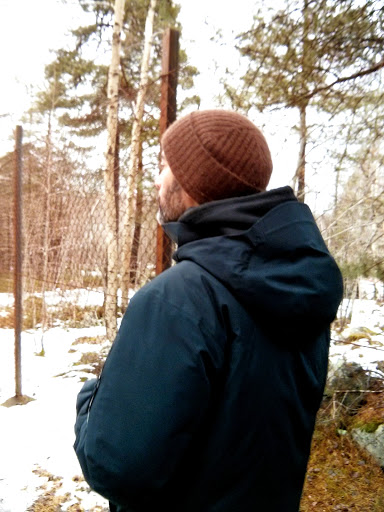 You pass a message on a light post. No idea what it means - sounds like some sort of saying. It’s cool. You slide on. 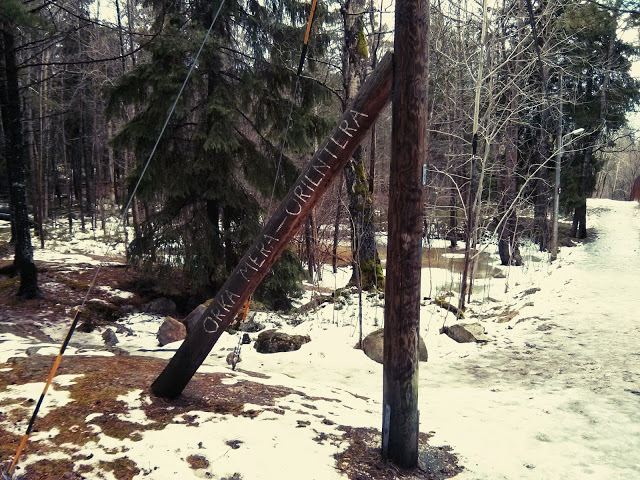 You go up an icy slope and back down, gripping the fence for balance. Then, over a slight bend, you see this: 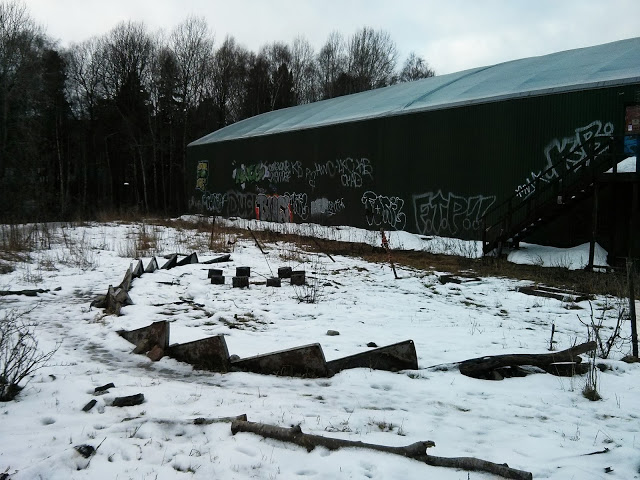 It’s quiet save for the wind. You stare at the building for a bit, coincidentally wondering what exactly happened with this stabbing you heard of and whether there happened to be a graffitied building involved. You walk closer because of course that makes sense. 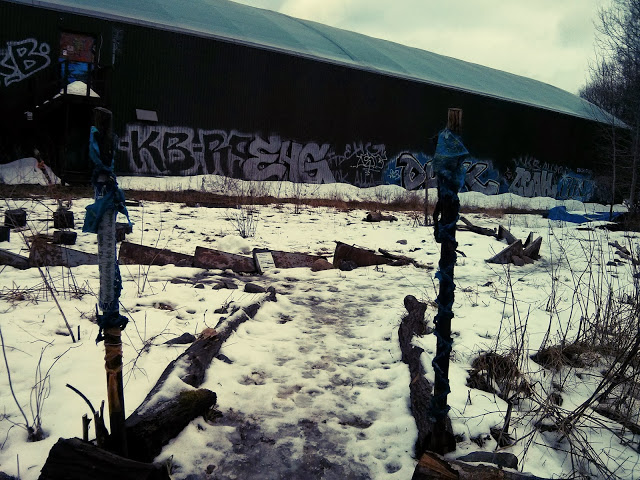 There is some sort of message embroidered into a piece of fabric on one of the poles near the entrance. “When the soul lies down in the grass, the [something] is too full to talk about”. 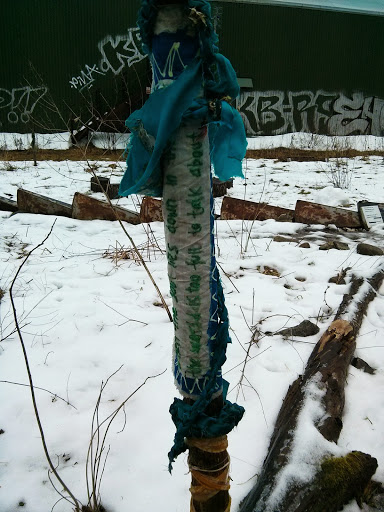 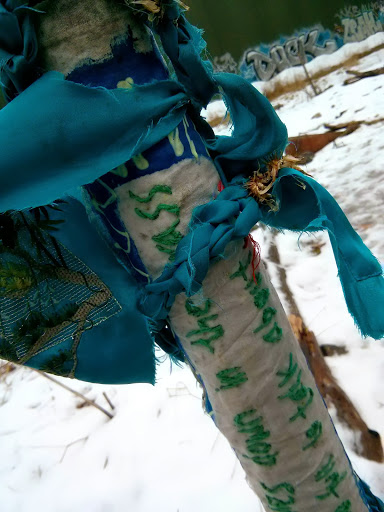 You Google it later and see that it’s probably a part of a poem by Rumi:

{% blockquote [Rumi] %} Out beyond ideas of wrongdoing and rightdoing, there is a field. I’ll meet you there.

When the soul lies down in that grass, the world is too full to talk about. Ideas, language, even the phrase “each other” doesn’t make any sense. {% endblockquote %}

You look around. There’s some sort of knocking sound coming from the building. You assume it’s the wind nudging a bit of metal against the roof or something. That or, you know, an axe murderer. You of course step closer. Maybe those people who for some reason decide to investigate a really not good looking place despite signs of dodginess in movies aren’t as stupid as you thought after all. Alternatively, maybe you’re more stupid than you thought. 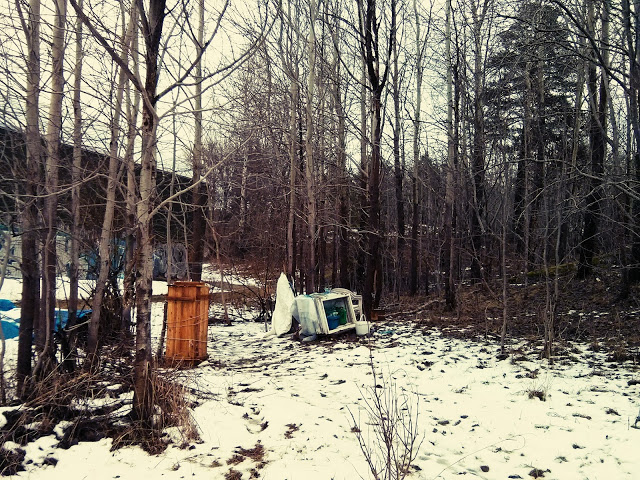 There is what looks like the bottom teeth of a gigantic bear trap right in front of you. With a sign. After running this through Google Translate later, it seems to be saying that there are meant to be edible plants growing here and asking people to go around. I think. 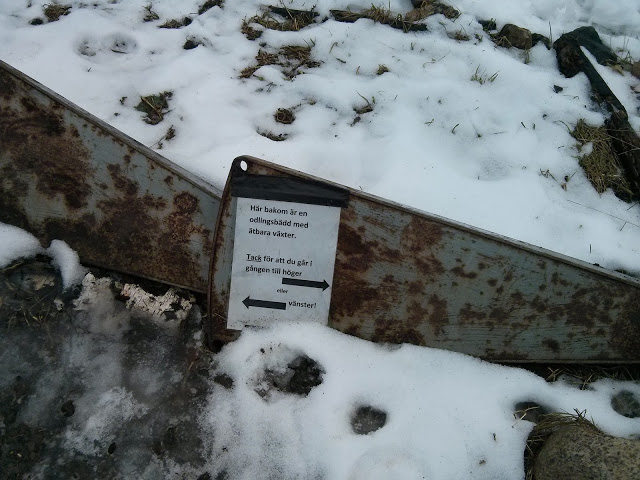 There are thorny bushes all around. 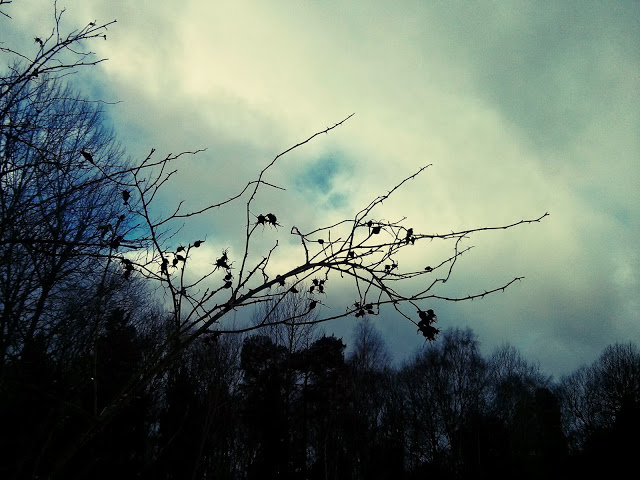 You see animal tracks in the ground (deer?) 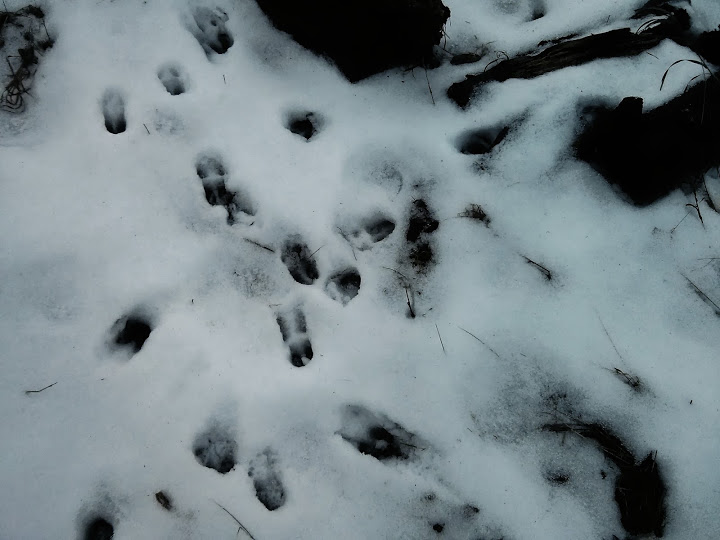 You look closer at the graffiti on the building. “Much Clown Love”: 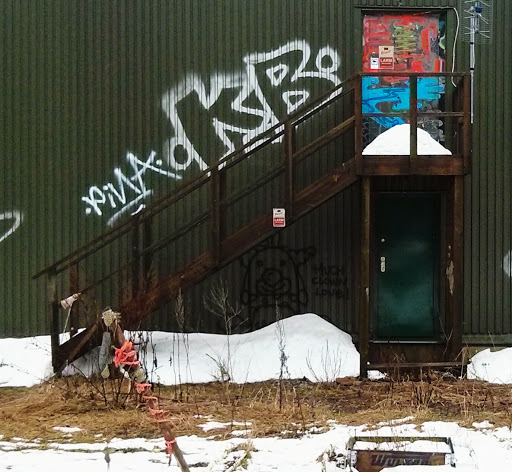 You decide to make a hasty retreat. Not because the eerie quiet coupled with thorny bushes, weird tracks, graffiti about clown love, a bunch of metal spikes sticking out of the ground, or totem pole looking things with mysterous messages are creeping you out or anything; just because you’ve just remembered you have something very important to do at home, far away from here.

You scurry past a wooden bench in front of a large rectangular enclosure with another wooden bench on another side (a sandbox?): 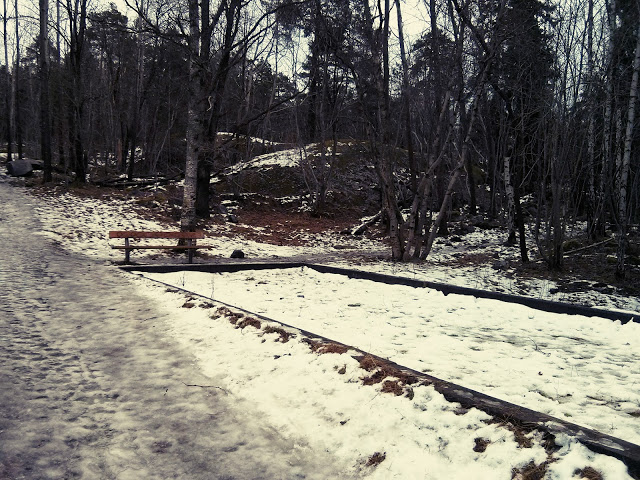 And past more thorny bushes lining the building. 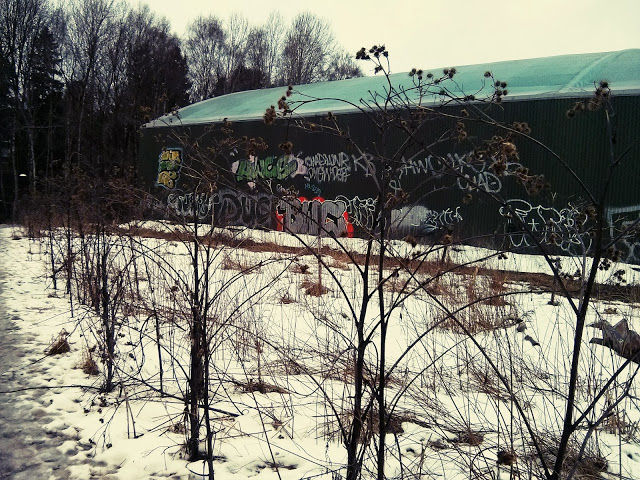 And past some monster - I mean large dog - tracks. 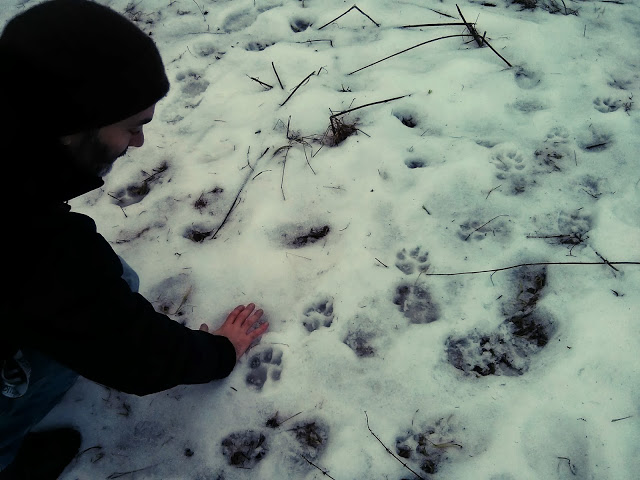 The path takes you around the building. It’s still gloomy, but there’s a less abandoned/haunted feeling about it there. There’s a car out front. 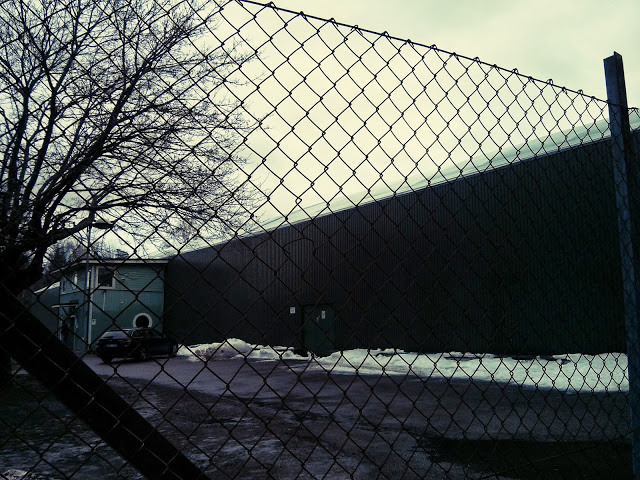 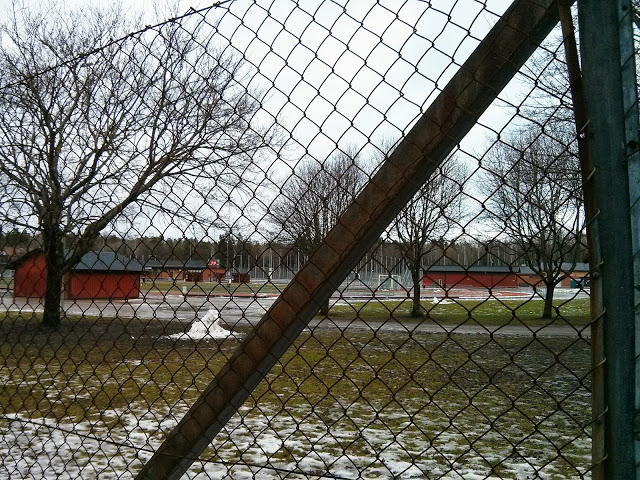 And so, your adventure comes to an end (in which you are thankfully still alive). You go to the secret Polish cafe where you eat sandwhiches and dumplings, drink tea with cake, and wonder what the crap you just saw. 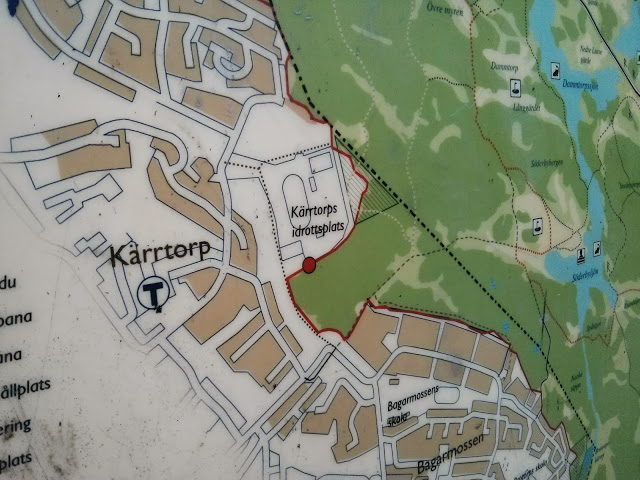