Today I lugged home this baby (sorry about the horrible photo, I’ll take another one tomorrow when I’m not in the middle of a yawn at 3am): 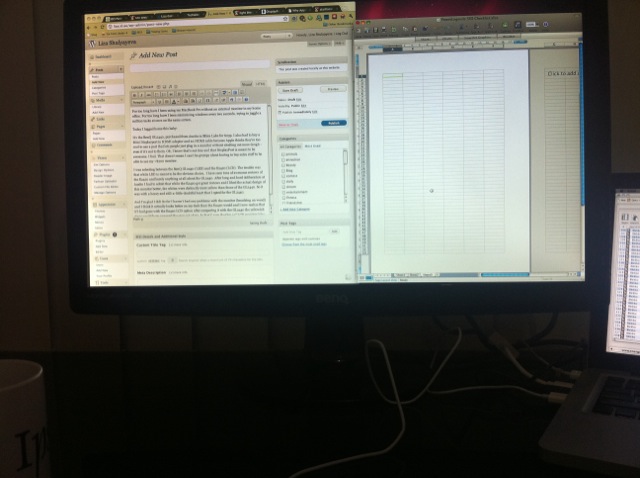 It’s the BenQ GL2440, purchased from Austin in Bibra Lake for $239. I also had to buy a Mini Displayport to HDMI adaptor and an HDMI cable because Apple thinks they’re too cool to use a port that lets people just plug in a monitor without shelling out more dough - even if it’s not to them. Ok, I know that’s not true and that DisplayPort is meant to be awesome. I lied. That doesn’t mean I can’t be grumpy about having to buy extra stuff to be able to use my >$200 monitor.

I was selecting between the BenQ GL2440 (LED) and the E2420 (LCD). The trouble was that while LED was meant to be the obvious choice,  I have seen tons of awesome reviews of the E2420 and barely anything at all about the GL2440. After long and hard deliberation at Austin I had to admit that while the E2420 got great reviews and I liked the actual design of this monitor better, the whites were distinctly more yellow than those of the GL2440. So it was with a heavy and still-a-little-doubtful heart that I opted for the GL2440.

And I’m glad I did! So far I haven’t had any problems with the monitor (knocking on wood) and I think it actually looks better on my desk than the E2420 would and I now realize that if I had gone with the E2420 LCD option after comparing it with the GL2440 the yellowish tinge would have annoyed the crap out of me. In fact C says that his 24” LCD monitor (also by BenQ) has that yellowish tinge. I didn’t notice before, but now that I have something that displays a truer white it’s become more obvious.

My home office is definitely progressing. I’ve gone from a tiny wooden desk to this: 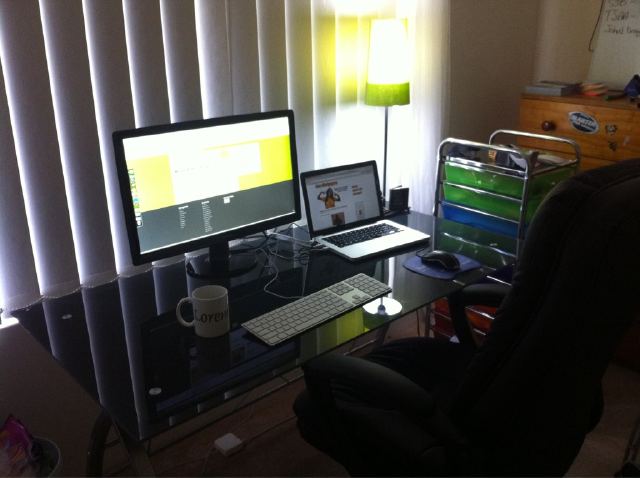