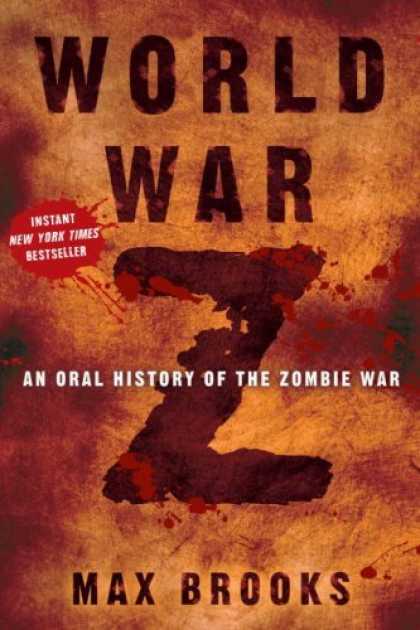 I finished reading World War Z. As a foreword - This review is being written a bit late. I tend to forget details about a book soon after I finish reading and I have already started reading The Gargoyle by Andrew Davidson, so don’t kill me if I’m missing anything important or if this post seems a little scattered.

World War Z by Max Brooks is an oral history of the zombie war. Max Brooks travels the recovering world to interview survivors and key players in the zombie outbreak.

World War Z is not really a zombie book…at least, it’s not just a zombie book. World War Z has an international scope as Brooks interviwes people from different cultures, each of whom had their own unique role to play in the war. He meets pilots, key decision makers, a doctor who was one of the first to come into contact with the first zombies when the outbreak began, the inventor of a so-called “vaccine” against the infection, radio operators, and more. Each of them had a unique story to tell.

I was just as fascinated by the different perpectives people had on the way governments and individuals reacted to the outbreak as I was by the action-packed survival stories of some of the interveiwees. The book was about people and the human spirit, and how people handled being pushed to the limit by having to fight an enemy that may have been their own child, husband, relative at one time. It also alluded to the failure of individuals, corporations, and governments to act appropriately during the outbreak. Psychological impacts were discussed, such as people being deluded into thinking they were zombies, or about how some almost seemed to worship the zombies, or about how many tried to humanize the zombies. And of course there was no shortage of the action survivalist bits - from the family who had journeyed north where it’s cold (Zombies freeze in cold weather) to the pilot who was stranded in the infested Louisiana swamps.

Especially interesting for me was the development and subsequent adoption of the “Redeker Plan”, which was a survival plan hinged on saving only select people from the population who could prove useful to the recovery efforts post-war while using the rest of the people, those deemed not be as valuable to the species in the future, as bait for the zombies. The Redeker Plan was undoubtedly a horrifying and cruel tactic, but when I think about it objectively its necessity to our survival as a species is undeniable.

I would definitely recommend World War Z (affiliate link) to anyone who likes post-apocalyptic stories following not just one main character’s survival, but the impact a world-wide disaster can have on our entire species. In this case, the world-wide disaster was zombies. But the psychological impact and human spirit portrayed in the book can really be applicable to any apocalyptic scenario.