Now that I’ve covered my experience at the 2011 Panasonic Home Entertainment launch in Melbourne I’m itching to write about the overall trip - my first one interstate, in fact. This has been my first flight since we moved here from the US (at the end of 2005). I have never flown by myself before, so it was definitely an exciting experience for me. One I almost didn’t get to have as I came this close to missing my flight completely. I ended up in the Qantas section of the Perth domestic airport and had to dash for the Virgin Blue section at the last minute, just making the final boarding call. I’m pretty sure flying is one of the best things ever (probably just because the novelty hasn’t worn off yet). 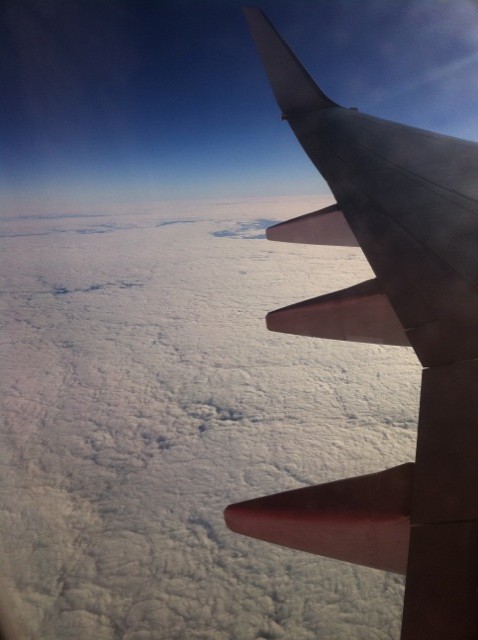 When I got to Melbourne, @Ian__Davies (who was also being flown to Melbourne for the event) and I split a cab to the hotel Soup put us both in. I thought the weather was chilly, but not too bad. I checked into my hotel room and when I went back outside fifteen minutes later it was now noticeably colder and drizzling. Then it started pouring. I ducked into an internet cafe for about fifteen minutes to check into my flight back to Perth the next day and when I came back out it was all sunny with not a raincloud in sight! WTF, Melbourne? I say WTF, but I actually loved the “creative” weather changes and thought it was awesome. It was perfect weather to step into a nice warm coffee shop and have dessert and a cup of coffee near the window, watching it pour outside. Anyway, I had to buy an umbrella for the first time in years, some gloves, and a new jumper to cope with the weather. 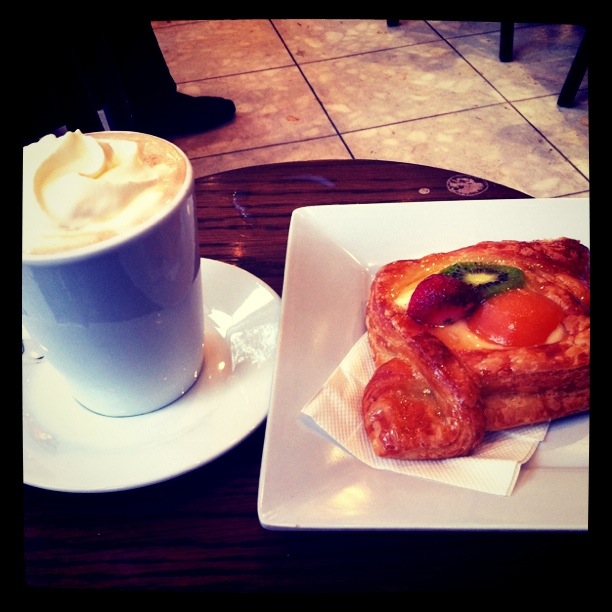 I was staying at the Vibe Savoy Hotel in the city. This is my first hotel stay in about six years or so, so I don’t know how much hotels have evolved since those days but this one was fricking awesome. I was on the 10th floor and the room was small but so comfortable, with a nice queen-size bed, heating/aircon, free Internet (which I couldn’t take advantage of as I didn’t have my laptop with me) and a totally kickass bathroom. One of my favorite things ever was being able to control every single bedside lamp and other light in the room (including the bathroom), as well as the temperature, from a setup right near the bed. When I was reminiscing about this to someone back in Perth they looked at me weirdly and were like: “Eh…Liza…all hotel rooms have that.” Do they? Do they really? I thought the place was awesome. 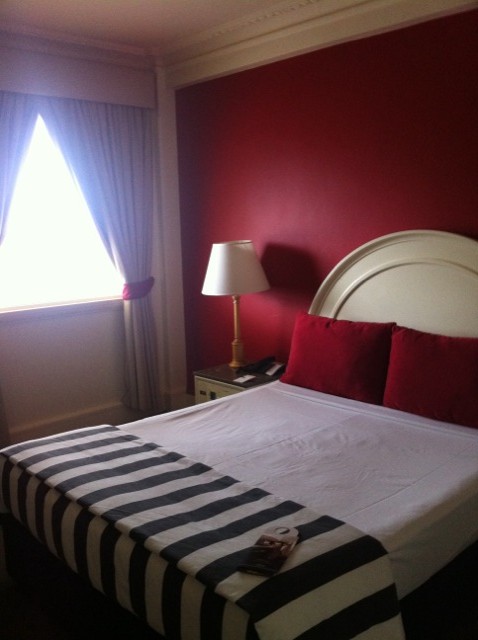 The people in Melbourne were different from Perth and I can’t really put my finger on why. Just walking around through the city and watching people, or hearing tidbits of conversation as I was passing by, or talking to the assistants in shops, the people as a whole just seemed more progressive and also…tidy? Is that just me or does anyone else know what I’m talking about here?

After the launch a few of us went out to San Churros. The group consisted of @Ian__Davies, @jubbing (of techin5.com), and @troyspitty and they were awesome. I have to say, the San Churros churros in Perth (the Leederville and Fremantle ones) are way better than the ones at that Melbourne San Churros. Not sure if it was just a bad/stale batch or if Perth churros are actually better. Here’s a group shot of us, taken using Jubbin’s camera by one of the nice people in San Churros: 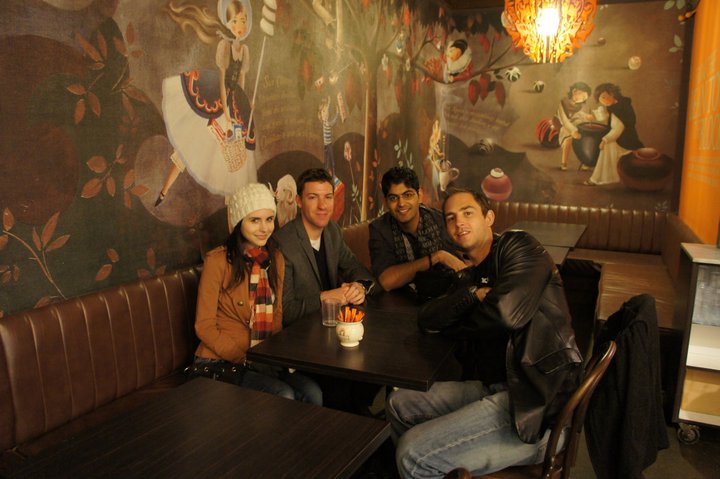 I mentioned this on Twitter, but I have to say it again. Internet cafes in Melbourne (at least the one I went to) are so much better than Perth internet cafes. This place had no stinky people, comfortable chairs that weren’t broken, large monitors and sold games. I could totally see myself spending my whole day in that place. Also, unlike Perth internet cafes one of the guys behind the counter at this internet cafe was actually really cute (and had a really nice jacket). He reminded me of a Final Fantasy VIII character, except without the crazy hair (I find when people try to recreate Final Fantasy hair in real life it just makes them look like girls).

Also, I met these two beautiful creatures. Apparently the horse I’m next to bit a kid’s finger off earlier because the kid was being a complete idiot: 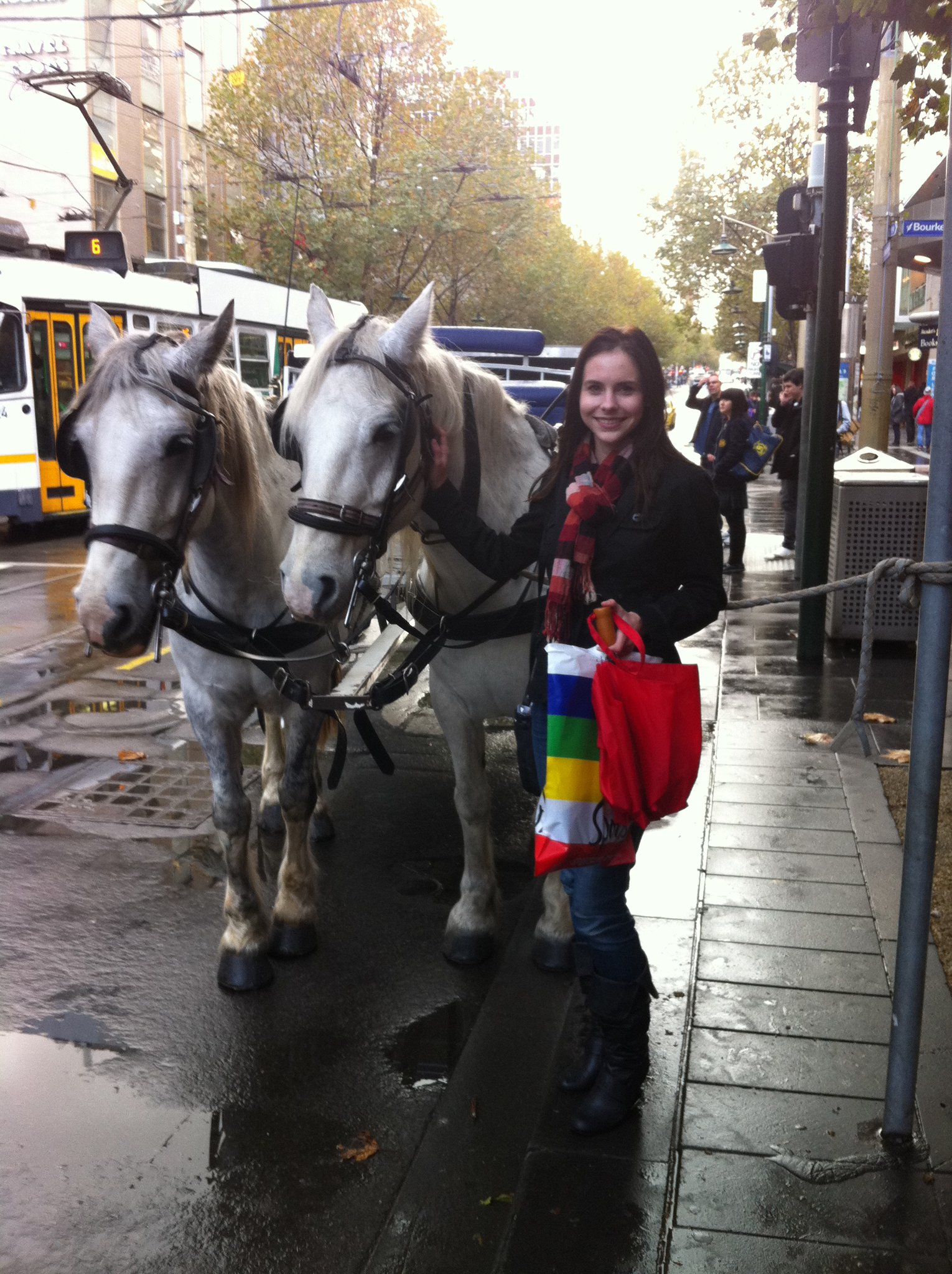 I wish I didn’t have to go back to Perth so soon and kind of miss Melbourne even though I only spent a day there. I’m definitely planning on coming back for a proper visit.