The Gargoyle by Andrew Davidson - still sinking in. 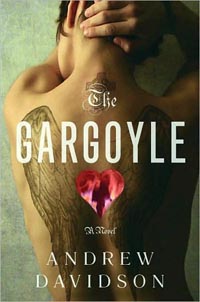 I finished reading The Gargoyle by Andrew Davidson today and I think the book is still sinking in. I’m not sure how much of an impact it had on me yet. At this time, all I know is:

The Gargoyle is written in first person, from the point of view of a man who has been burnt horribly in a car accident. The reader never finds out his name, but personally I felt like I never needed his name. The narrator is a successful porn actor and director who is also a drug addict. He is vain, egotistical, and is unable to make an emotional connection with another human being. The narrator, high and drunk, gets into a car accident that leaves him terribly burnt. He manages to survive only because his flipped-over car slides into a creek at the last minute and douses out the flames.

He starts being visited by a woman from the psych ward named Marianne Engel. She begins to tell him stories and insists that he is her reincarnated lover from medieval Germany. Marianne, a devoted Christian who apparently used to be a nun at a famous monastery in the medieval times, believes that she is close to giving away her 1000 hearts as directed by God and her “Three Masters”. And the last heart is for the narrator. The narrator, being a good atheist, does not believe this, but listens to her stories nonetheless.

One of the things I love most about this book is that it can very well be a fantasy novel. On the other hand, it can also be a completely realistic story of a mentally ill woman who likes telling stories to a man she’s just met in the burn ward. How the reader interprets Marianne Engel’s stories and actions is completely up to them. We can either approach the story as a sceptic, viewing Engel as nothing more than a schizophrenic and/or manic depressive, or believe that her claims are actually true. There is plenty of evidence in either direction, but one thing doesn’t contradict the other and this evidence could be interpreted as something both reinforcing and ruling out Marianne Engel’s validity.

I’m not sure if this is one of my favorite books or not, but being afraid to start reading something else for fear that it will be mediocre compared to The Gargoyle is a pretty big sign that it’s going to be up there for me. I’ve heard people say that if this is the last book they ever read, they’ll be happy. I’m not sure about that. I do know that I’m legitimately worried that nothing will compare after this. Davidson did an amazing job of making the reader feel, physically and emotionally, everything the narrator is feeling. You almost feel being burned alive during the accident - especially with the “experiment” the narrator gets you to visualize toward the beginning of the book.

I definitely recommend The Gargoyle (affiliate link) to anyone who can force themselves through the graphic (and from what I hear painfully accurate) descriptions of the treatment of burn patients toward the first part of the book, and to anyone who can handle the emotional rollercoaster ride that Marianne Engel brings with her stories and the later stages of her carving as she gives away the last of her hearts.