Well, One Game a Month is done! I’ve managed to complete 12 games for the year. My motivation by the end was lacking, so I took it kind of easy this month and made a very simple and quick game called Simon Says. Last month’s game, 9 to 5, took much longer due to the number of art assets required. I’ll write a proper post about the challenge, how everything went, etc later.

But now that it’s done I can finally move on to the next project I’ve been itching to start. I want to dedicate the entirety of next year not to finishing games, but to more structured learning (focusing on math and programming). I might set a goal for each month, but the goal won’t be a playable game.

I also want to move my site hosting over to NearlyFreeSpeech and move away from Wordpress, which I think is becoming a bit bloated for my liking. I just want a simple solution for a blog - not a full blown CMS. I’ve been looking at Ghost, Octopress, and some other options.

There have been so many awesome games submitted for this year’s One Game a Month. I just played a couple by Jake Trower - Pixel Pets, Conway’s Life, and Dungeon of Rudimentary Trials. It’s weird how long a game where you do nothing but click on an image and “talk” to a pet can keep me occupied. I kept wanting to get to the next egg to see what would hatch and evolve. Conway’s Life was also interesting - a JS replica of Conway’s Game of Life, as you may have guessed. And in Dungeon of Rudimentary Trials I got killed by a bunch of ninja cats. I look forward to going through a lot more 1GAM games in the future. 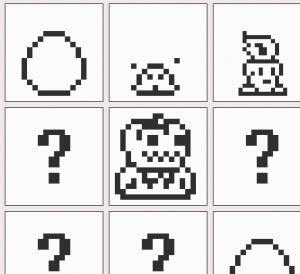