Hello, MacBook Air. Where have you been all my life?

Darn you, Jason, for reawakening my laptop purchasing habits. All it took was one Tweet about how I haven’t bought a new laptop in 2 years - a vast improvement on my previous habit of buying laptops left and right. Jason jumped at the opportunity to tell me about how awesome the new 2011 MacBook Air was. I didn’t think much of it at the time - I was happy with my 2009 MacBook Pro and proud that I hadn’t felt the need to splurge on a new notebook in two years.

My 2009 MacBook Pro has been a sturdy, reliable companion for the past two years. However after that tweet little complaints started being more annoying and frustrating. I was waiting a little too long for applications to open, getting a little too frustrated with Photoshop hanging with some larger PSDs, complaining a bit too much. In retrospect I probably owe my trusty 2009 MacBook Pro an apology - it lasted me for two years with almost no signs of wear, solid and reliable as ever. The only thing that was really different now from the day I bought it is the maximum battery life - it just didn’t last as long as it used to after ~350 cycles or so. I guess what I really wanted was an excuse. Any excuse to seriously consider the MacBook Air. And as soon as I started seriously considering the MacBook Air, it was pretty much a done deal.

I went to the Apple store in Perth the next day and walked out with a MacBook Air. I got the base 13” model.

I never really realised just how much faster my laptop could be. Applications open instantly, nothing hangs - ever (Update: right after I published this the Mac App Store hung for several seconds on startup. D’oh). Bootup time feels miraculous, something like 15-20 seconds max. I’ve also always taken the discomfort you often go through when trying to position a normal-weight laptop just right on your lap as something that’s just a fact of life. I guess having a desktop-replacement-like Dell Vostro 1500 as my first laptop kind of got me used to that. Last night as I was working on the couch with the MacBook Air in my lap I realised that a whole new world of not having to fidget with positioning was now open to me. This thing is so light that movement and positioning is a piece of cake and the hard edges don’t dig into your skin as you work.

Right now I’m sitting at The Merchant in Fremantle - the first time in months that I actually took my laptop out and about. You know, like you’re supposed to. My MacBook Pro, while not overly bulky, was just too heavy for me to carry around comfortably for a few hours (and because I use public transport, a lot of carrying around is required). With the MacBook Air I don’t feel that strain on my shoulder while carrying it in my laptop bag. It’s easy to take out and put away and I could see myself being able to lug it around for the entire day without much, if any, discomfort setting in.

I’m glad I got the MacBook Air - so far, anyway. Even C, who doesn’t like Macs, admits that their build quality is second to none and after inspecting the MBA skeptically, gave it his seal of approval (that being “Hm…it’s nice.")

To be able to work in Fremantle today I needed a WiFi hotspot. I could’ve gone somewhere with free internet, but considering I’m probably going to be travelling more with the MacBook Air I thought I may as well be able to carry my own connection with me as well instead of having to rely on Internet-friendly  cafes and such. I picked up the ViViFi C900W WiFi Hotspot from Dick Smith Electronics in Fremantle for $129. It came with 3GB bonus data. Setup was super easy and it is working like a charm. 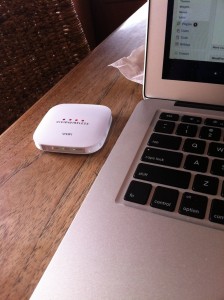