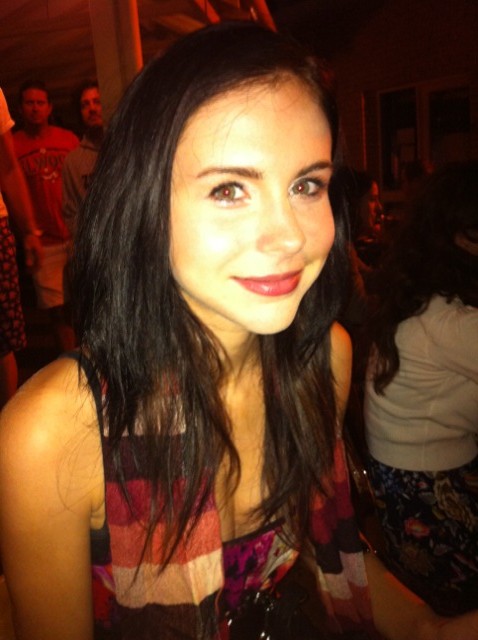 [/caption]Months ago (on the day of the 2010 Halloween Party and the Prison, I believe) I was in Fremantle. I stumbled across a little cafe/restaurant/lunch place called Gypsy Tapas House, right across from Myer. I had never had tapas before at that time, but after having lunch at Gypsy Tapas House once I was hooked. I knew that I had to go back there eventually. Last night, I finally got my chance. C and I went to Gypsy Tapas House in Fremantle for dinner. On Saturdays they have two dinner sittings - I believe one is at 6:30pm and the one we went to was at 8:30pm. You can either buy tapas individually for $8 per plate (tapas are tiny dishes, so you have to have more than one) or you can purchase the tapas banquet for $40 per person. The banquet does not include drinks or dessert, but they keep bringing out different tapas “until you say stop” (which is what the super nice waitress said).

The tapas were absolutely excellent. My only regret is that I told them that while I was a vegetarian, I do eat seafood. They must have (understandably) taken that to mean that I’d like some seafood. I never expected their seafood tapas to be so varied. Some of these things I was just unable to eat. I couldn’t handle the whole cut-up squid, for example, with the head, tail, and legs still visible in their squid shapes on the plate. I tried them and they tasted ok, but I guess I’m just not that much of a seafood person and seeing that little squid head on the plate…I just couldn’t do it. I did enjoy the fish dishes though, like sardines. This isn’t a fault of Gypsy Tapas House - it was simply my realizing that next time I’ll stick to the vegetarian dishes only.

C, on the other hand, wanted some meat. Unfortunately we weren’t really given that many meat tapas until the end (more on this below). I’m not sure, maybe this was because they were sticking to the vegetarian and seafood-type dishes because they knew I was a vegetarian and wanted us to be able to share?

The tapas were so varied and each was so different. I’ve never tasted some of these things and combination before and it was like a whole new world. Even the simplest of dishes - broccoli with some sort of nut paste - tasted just amazing in this combination. There were also cheeses (I loved the baked feta cheese dish). I kept meaning to take photos, but by the time I remembered I was already halfway through each dish.

The atmosphere was possibly my favorite thing about Gypsy Tapas House. At one point I had a blonde moment and said: “This kind of feels like you’ve stepped into another country, or a fantasy story. A country of…pirates…or…Russian…things…gypsies! A country of gypsies! Oh…wait…” Then I realized that the place is called Gypsy Tapas House. I guess they did great in that department!

Gypsy Tapas House had live music - it was great, exotic, and reminded me of those old stories where snake charmers sat and played their flutes, with the snake coming up and dancing out of their hats in front of them. C went so far as to suggest that we should watch Aladdin again. The atmosphere was just perfect. It was busy, but in a very merry way - not in a too-packed, stuffy way. All of the waiters were very casual and very friendly, I just loved it. Everyone was laughing and talking and there was even a bellydancer who walked around, dancing and laughing. It was really almost like a fairytale feeling.

Despite the food being great and the atmosphere being amazing, there is one thing that’s nagging me about Gypsy Tapas House. When we were ordering the waitress said that the tapas banquet is probably a good choice if we plan on ordering more than 5 tapas (as 5 tapas at $8 each make up $40). She said that with the tapas banquet, the tapas just keep coming until we said stop. At first this is exactly what happened. We were constantly getting new dishes brought out to us, before we even finished the old ones, it was amazing. However, after we got about 7-8 dishes in total (and I wasn’t counting, so this is just my estimate), they considerably slowed down. The tapas came slower and slower and we were still hungry, C especially (if you saw C you would understand).

It slowed down to the point where no tapas came for about 15 minutes or so. And when they were brought out, it was one small tapas dish at a time. And then the waiters, while very friendly, began to casually ask us how we were doing and if we were full (to which we said no…because…well…we weren’t). It wasn’t just us - the place was still packed, but tapas slowed down all around, so we didn’t feel so bad about waiting for more tapas as we weren’t the “stragglers” left in the place. While at first tapas were flowing in quick succession (and these dishes are small, so they weren’t taking long to eat) and we were each getting our own dish (so two at a time), after a while we were just getting dishes one by one…very slowly. At this point C had only gotten one meat dish and was still ravenous.

Eventually one of the waiters came up to us to ask if we wanted anything specific off the menu. He seemed a little exhausted and frustrated that we weren’t done yet as he walked away (although he always remained very nice). Another waitress came up and asked C what kind of meat he liked the most (and at one point asked if he liked offal, to which he said no! She laughed and said he could have lamb or some other meat instead, or both). C got to eat about 3-4 meat tapas at the end, which wasn’t bad, but it really felt like toward the end we were pulling teeth.

I’m not sure how many tapas we ended up getting toward the end, but I’d estimate maybe 15-ish in total between the two of us (however do not take my word for this, this is just my estimate. We weren’t counting). If this number is accurate, the tapas banquet only included 2.5 extra dishes (each) from the 5 that we would have gotten if we spent $8 per dish until we hit $40. I mean, I understand that it still worked out cheaper in the end as we did get more than 10 tapas, but we really thought that when they said the tapas keep coming until we say stop we’d get a seriously large number of tapas. You have to remember that the dishes are tiny - they’re supposed to be. I don’t eat much usually, but even I was still hungry when that main flow of tapas was over. Towards the end we just started feeling the pressure to start winding up and leave as the waiters began asking us how we were doing and if we were full, and the tapas slowed to a crawl.

Having said that we really do appreciate that the waiters specifically asked C what kind of meat he wanted and put in a real effort to make sure that he didn’t leave hungry. In the end I think even if we couldn’t quite say that he was really full, we could at least say that he wasn’t so hungry :).

Would I go back to Gypsy Tapas House?

I would really love to, for the taste and variety of the tapas and the atmosphere. This place is seriously almost perfect, except for the issue described above (which unfortunately was a pretty big negative for me). I don’t know if I’d order the tapas banquet again as like I said, the long wait times after the initial stream of tapas was really kind of disappointing and sort of dampened the mood. The problem is that for me, for dinner, 5 tapas is not enough. This means that I can either have a repeat of the same and just feel this nagging disappointment/iffiness at the end or pay individually for each dish, which would be very expensive.

I would definitely go to Gypsy Tapas House for a quick lunch during the day, as I can probably get away with 5 tapas or less for lunch. I’ve been there once during the day and it was great also, but I just loved the fantasy-like atmosphere that they created with the live music, dancing, and everything at night. I’m not sure if it’s possible to just walk in for a quick snack at night while I’m in Fremantle and order a couple of tapas and dessert or something, not a full dinner, or if I have to make a dinner booking.

Have you ever been to the Gypsy Tapas House? What did you think? Was your experience with the tapas banquet anything like ours?