This past weekend I went to GenghisCon. If I had to describe what kind of a convention GenghisCon is exactly, I would just call it an all things awesome convention. It has board games; it has workshops; it has panels about cryonics, cryptozoology, and other slightly weird stuff; it has video games. It has just about anything you can imagine doing if you decided to dedicate an entire weekend to having as much potentially geeky fun as you possibly could.

I did so much stuff this weekend that it’s proving to be difficult to remember it all. I’ll try to describe it below as best I can - and all of this stuff is not including the general board gaming etc that I did in-between!

Last year GenghisCon was held at Trinity College. I went for one night and loved the venue. This year it was hosted at St Georges College and this venue was a little disappointing for me. Outside St Georges College was great. But my first dorm room was so horrible that I had to sleep with the light on (granted this was the same night we played the Cthulhu RPG. My room was large and creepy. It had a huge window with massive scary curtains that were tied up with two plastic bags. The bags were sticky and grimy with something as I took them off…I washed my hands three times. There were cobwebs everywhere (the next morning I found a spider in my shoe!) and a red pipe sticking out of the ceiling and leading to an ominous looking metal box right near the bed. There was a frayed wire sticking out of the wall and corn chips on the floor. 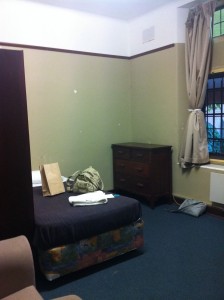 Thankfully the next day at the registration office I asked if I could pay for another room if there was one available. I just couldn’t sleep in that room another night. Fortunately I was given another room free of charge to make up for the dirty grossness of the first. I was very thankful and the second room was great! 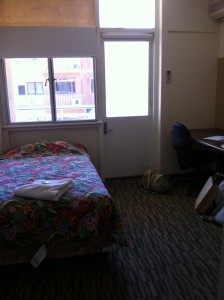 I’m not sure if my memory of Trinity College has faded, but I’m pretty sure the bathrooms didn’t smell there. Every single bathroom I walked into at St Georges College was smelly.

But it’s ok, I didn’t let the creepy dorm and smelly bathrooms ruin my good time.

I got to GenghisCon on friday evening (straight after dinner, I think) and the first event I participated in was Parlour Games. These were tons of fun.

Next, I went to a presentation called Artifactory: Hackers and Techies! I’ve never heard of Artifactory before, but apparently it’s a collective of technologically minded creatives in Perth who have a giant warehouse where they pitch in for tools and materials to create totally awesome stuff. On show was a maker bot and an awesome machine that made music with electricity. 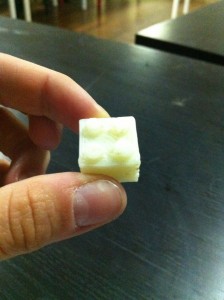 Then I participated in my first Cthulhu RPG. And boy, was that awesome! I found Cthulhu to be a lot less strict than Dungeons and Dragons. We didn’t take turns to make moves, we just spoke and did things in character not in any particular order but in how the events progressed. The only dice we rolled on a regular basis were 2d10 and 1d6. I was a student of psychology whose main asset was a hardhat with a wind-up flashlight. So whenever we traversed caves or other dark places or heard a strange noise I instantly turned toward the source and began to furiously wind up my flashlight. There was a bit of humor in this session, which I loved, and at the same time it was still very creepy.

I woke up with my light on and a spider in my shoe.

How to make a comic

That morning the first calendar-event I went to was How to Make a Comic, which was great. I was surprised that only about 4 people showed up - I would’ve thought people would be way more interesting in making their own comics. The workshop was great and I learned a lot.

I then went to learn how to play Settlers of Catan, which was very interesting. I am definitely buying a box now and bribing my boyfriend into playing in exchange for massages.

Unfortunately I didn’t get to finish the game because the next even on my list - a panel called Cryonics in Australia - was starting. The director of the Cryonics Institute was running the panel along with two other cryonics enthusiasts. They presented a good argument about the decision of whether or not one should sign up and go through vitrification when they die:

The only thing to lose from a non-religious perspective is money. Vitrification costs between $40,000 and $150,000. But this point becomes a little less important in the decision making process when you find out that after a $12k deposit you can pay the rest of the fees through life insurance after you die.

So now the real question is - do I want to be brought back? Do I really even want to wake up in the future sometime? I’m not so sure. It’s something to think about, anyway.

After this talk I mingled and did different things for a bit (which included a very interesting discussion about the continuity of consciousness) and then went to the Indie Games panel, which was run by some of my old friends at Interzone. They did an awesome job.

In the evening was “Make Your Combat LARP Weapon”, where we made swords and such for the next day’s combat LARP tournament. Swords were made from PVC pipe wrapped in a thin layer of foam. The blades were also made of foam and then the whole thing was duct tape to keep it stable. We had to test whether the weapon was OK to use in the tournament by first hitting our combat weapon instructor as hard as we could with out weapon and then having him hit us as hard as he could. I decorated my approved weapon with blood on the tip and a kiss on the blade. 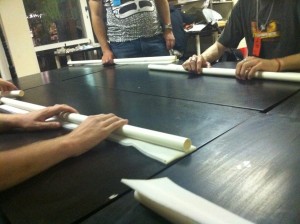 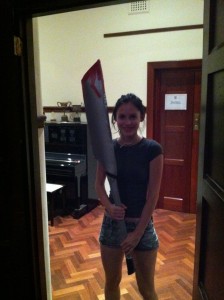 There was also a Rebel Empire interactive show on that night: 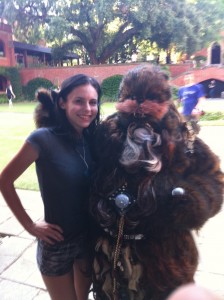 Next came the Jack the Ripper seance, where a group of us gathered to call Jack the Ripper after first doing some experimenting with pendulums and hypnosis. Now, I actually believe in all this stuff, but I found myself sceptical. Hands were definitely moving during the pendulum exercise (although I’m sure it was a subconscious act, not done on purpose) and I have a feeling the hypnosis part of it didn’t really work…Also when we laid cards on the table to call a spirit who seemingly responded and put our fingers on an upturned glass through which the spirit would talk, it felt like someone was moving the glass. I don’t want to claim that I know this for sure, but that’s what it seemed like to me. I felt nothing. You would think if a spirit was moving through you you’d feel something - and the others claimed to feel something. But not me. Maybe it just wasn’t talking to me? The conversation after the actual event was much more interesting for me than talking to the “spirit” (and to be honest I don’t like messing with this spirit stuff anyway).

Apparently some people complained about us dying a horrible death at the hands of a ghost or something…which was…weird.

Then I went and watched some Rock Band playing, which was fun, before heading off to my new and cosy room.

Sunday was the combat LARP tournament, which started at 10am. After some sword exercises and stretching we were paired up to fight. Each pair had two rounds. My worthy opponent was Deej, who took me out both rounds with great vigor. It was an excellent battle. At one point I had both of my legs amputated and was crawling on the ground, then managed to cut off both of Deej’s legs as well! But alas, she was too quick for me and I died a painful death. [caption id=“attachment_25415” align=“aligncenter” width=“224” caption=“LARP combat tournament”] 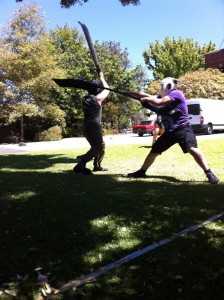 I’ve decided to make another LARP sword for my boyfriend and make him practice with me to ensure that next year I will be victorious!

After the LARP tournament I managed to catch some of the talk on Cryptozoology. And after that I was so tired that I just napped in my room for a bit, watched some Six Feet Under on my MacBook (Which I brought with me), and then headed home!

So how was it?

All in all it was an excellent GenghisCon! If not for the slight dodgyness of the venue, I would rate it a 10/10. I have quite a few videos of the event and might post those up later.