I have a confession to make: I eat absolute junk. I think the only thing keeping me from getting fat is skinny Ukrainian genes and the fact that I often forget or just can’t be bothered to eat.

I know that being skinny doesn’t mean being healthy or fit, so I’ve been trying to eat healthier…by that I just mean eat more fruit and vegetables. I have gotten a bit better, but am still far from healthy eating. I’ve compiled a rough guide for myself in terms of cutting down on junk:

Today I went to the shop and got a whole pile of fruit and some vegetables. Out of my entire grocery trip I only got two things that were unhealthy: a frozen vegetarian food snack box and a box with two frozen pizza slices. I got pomegranate, kiwi, tomatoes, ravioli with vegetable stuffing, sunflower seeds and banana chips, berry yoghurt, and other fairly healthy items (by my standards, anyway). 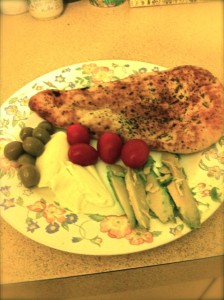