From iOS to Windows Phone - I got a Nokia Lumia 800

On Friday my iPhone 4 took its dying breath and stopped receiving calls while rebooting itself repeatedly.

For the record, this is what my iPhone 4 looks like. Its death is probably my fault. It’s seen two major falls - the first after being placed on top of thin air instead of the bathroom counter after a long night of DXHR and the second during a spider incident. 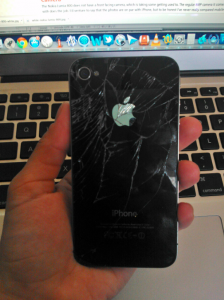 It was time for a new phone.

For those who don’t know me, I’m a gadget-aholic. When moving house recently instead of a shoe box I had a gadget box. Two gadget boxes. My main weaknesses are laptops and mobile phones. I have been very proud that I lasted two years with my iPhone 4 without upgrading, but I’ve had my eyes on Windows Phone 7 for a while. Honestly, I’m a little sick of iOS. There’s nothing that nags me about it in particular, I just wanted something new and was drawn to the WP7 UI.

The first Windows Phone 7 device that caught my eye was the Nokia Lumia 800. Except by the time it was available in Australia rumors of the next Lumia were abound and shortly thereafter the Nokia Lumia 900 was announced. I was waiting for the Nokia Lumia 900. Until my iPhone 4 screwed itself. Because my iPhone is largely used for business and gets calls from clients, I couldn’t really afford for it to be out of service for any amount of time. I decided it was time to bite the bullet and get the Lumia 800.

I went to Dick Smith Electronics and bought an unlocked white Nokia Lumia 800 for $580, down from the original $628 (note: you should be able to get the Lumia 800 for $450 with an Everyday Rewards Card at DSE superstores that are closing down. No WA stores were closing down, so I was not able to take advantage of this). 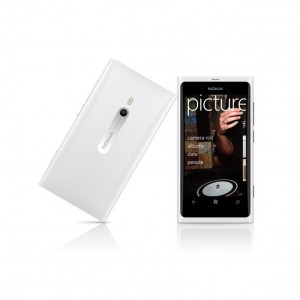 Not just the phone, but the OS. But for now let’s focus on the phone.

The Lumia 800 is, in my opinion, fricking gorgeous. The slightly tapered corners, the unibody polycarbonate casing, and attention to almost every detail make this phone look and feel as high quality as the iPhone (not something I can say about many mobiles these days). Then again, someone did say it looks like a salad bowl. To them I say: shut your face, buster.

If I had to choose between the iPhone 4S and the Nokia Lumia 800 from purely a looks perspective, I’d have a impossible time deciding. I prefer the iPhone’s flat-edge sides to the rounded sides on the Lumia 800, but the Lumia 800 has those tighter corners than the iPhone, which I love. Anyway, the phone looks fricking awesome.

The polycarbonate body of the Nokia Lumia 800 is not painted, meaning a scratch on the body will reveal…just more of the body, not a different material underneath. The phone is not as heavy in your hand as the iPhone, but feels solid. One thing I don’t like is the slight gaps you see between the casing and the edge of the screen at the top and bottom sides. It’s very, very slight, but I’m worried that dust could eventually build up in there.

The Nokia Lumia 800 does not have a front facing camera, which is taking some getting used to. The regular 8MP camera it comes with does the job. I’d venture to say that the photos are on par with iPhone, but to be honest I’ve never really compared mobile phone cameras properly. All I know is it works for me. The one fiddly part with this is that the side camera button is very close to the row of three main touch buttons (back, home, and search) on the phone. When camera whoring (as you do), it’s too easy to accidentally press one of these buttons and close the camera app.

This is where the problems start. I became interested in Windows Phone 7 because of the UI and here I was mostly not disappointed. It’s a pleasure to use and looks amazing, in my opinion. Did I mention how fricking pretty it is? However, some basic aspects of the OS are driving me up the wall. By “some” I mean two:

Push notifications and refreshing appear to be delayed for non-native apps (so things other than email, SMS, etc). For example, on iOS I’m used to receiving my Twitter replies and direct messages as soon as they come in, almost instantly. With Windows Phone 7 using what is supposedly the best Twitter app available (the paid version of Rowi), notifications take 5 minutes at best and 30-45 minutes at worst to actually arrive. What’s more, even refreshing the app manually often does not show tweets that I know are there. The second issue may be a problem with Rowi (I’m not sure), but apparently the delayed notifications are a known issue across all non-native apps.

A minor snag that has already begun to annoy me is the inability to delete photos in bulk. For example, a couple of days ago I took a whole bunch of pictures of my dog. My dog is awesome, but not very photogenic, so I ended up with about 10 photos and one that I wanted to keep. To delete the other nine I had to tap and hold each photo, press Delete, then confirm deletion one by one. There was no way to select photos and delete them in bulk. This isn’t a deal breaker for me, but is just one of those things that I would have thought they’d have considered.

Possibly one of the most frequent complaints about Windows Phone is the lack of apps. Personally over the last year or so I’ve noticed myself only using a bare minimum number of apps on my iPhone. I rarely open anything other than Twitter, my web browser, and a few apps like Dropbox that integrate with my other services. So for me, the smaller selection of apps in the Windows Phone 7 Marketplace has not been an issue thus far. In fact I found some cool apps in the Marketplace that I never noticed on iOS, like an app that lets you set your own ringtones from YouTube videos and other music services, or an app that lets you download YouTube videos straight to your phone (maybe iOS has these as well, I just never ran across them). So far my non-native apps on Windows Phone 7 are:

The only ones I currently use regularly are Rowi and Gchat.

I was initially worried about transferring my contacts from my iPhone to the Lumia 800 being a potential hassle. Fortunately Nokia provided a handy Contacts Transfer app with the Lumia 800. All I had to do was turn on Bluetooth on my iPhone and the Lumia 800 and pair the two devices. Transferring all 300-something contact entries to my new phone took all of 30 seconds. 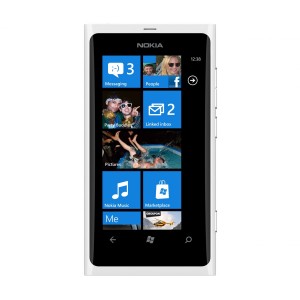 I’ve been using my Nokia Lumia 800 for a few days now and right now if anything would be a deal breaker it’s those push notifications. Other than this, the phone is as close to perfect as anything else out there (for me). Do I wish that the Lumia 900 was out and ready to buy when I had to rush out and get a new phone? Yes. Is the Lumia 800 the next best thing? Yes. There are a couple of things that I wish this phone had - a front facing camera for example - but nothing that majorly makes me miss my iPhone. Even the app selection on Windows Phone 7 is decent for me (as I’m not a heavy app user anyway). I’ve been enjoying using something other than iOS and Windows Phone 7 does everything I need aside from the couple of complaints above. Unfortunately as a heavy Twitter user who has both @reply and DM conversations a lot, the delayed push notifications are a pretty big problem for me. I’m not sure if I’ll get used to it and learn to deal or if it’ll eventually drive me up the wall and make me switch back to iOS. If anything was going to make me go back to the iPhone, it would be this.

Speaking of Twitter:** as a heads up, my Twitter handle has recently changed from @techalite to @lazer**. So do not follow the @techalite Twitter account. You may see some business related tweets on there, but my personal tweets (as in the ones where I rant and rave about random things and ramble about JavaScript) will be on @lazer.