It’s been a busy weekend of makeup and Slovakian hunks.

A while ago I was invited by my wonderful hairdresser to come to the Ebony & Ivory makeup launch. I of course said yes - what kind of a horrible person would I be if I passed up the opportunity to play with a new line of makeup while being offered free food and champagne and getting to watch makeovers? (As a note I should addI don’t really like champagne…and I didn’t really eat much of the food, but it was a great thought in general)

The pass I was given said it was good for two people, so I asked Ellen if she’d like to go.

The launch was on Saturday. We got there at 7, got our names ticked off the list, and went to explore the makeup line. I was very happy to find out that the new EI makeup line is mineral based - I can’t wear non-mineral foundation as I break out and prefer other mineral products in general. We stayed there for a couple of hours, exploring, eating snacks that I later that night found out were made of chicken liver (…I did not eat them again), and having champagne (for me mixed with orange juice).

There were a few photographers and videographers there and I noticed one in particular who looked very familiar, but I just could not figure out where I’ve seen him before. Have I worked with him before? No…I’ve only worked with one photographer who looked around that age and he’s in England. I mentioned it to Ellen, saying “I wonder if it’s the guy from the iPhone 3GS launch last year…”

As it turns out it was Alex Howell (note: not Cow. 8D) - and it was the guy from the iPhone 3GS launch last year! Apparently he had to go on another friend’s Facebook (I met Phil at the 3GS launch and he was there with Alex at the time) to check that I was actually who he thought I was, too, because apparently I looked familiar as well.

Anyway, I really liked the look of the EI makeup line and I’m definitely going back there to check out the cream blush and one of the lipsticks that drew my interest (it had a moisturising “tube” in the middle and the lipstick color around the sides). They didn’t have the prices near the products on the night and I didn’t ask, so next time I go in I’ll check that out. 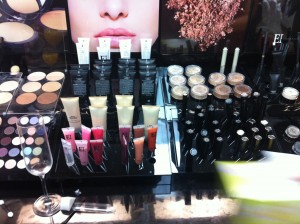 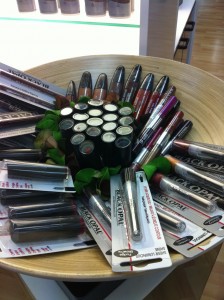 Ellen and I left and ended up at some bar nearby (although I can’t remember what it was called). We originally went in to use the restroom, but Ellen felt it was rude to just go to the restroom and walk out so we chatted while she got a beer. I wish I could drink beer…it looks so refreshing, but I just can’t stand the taste :(.

So we left to go back home and were stopped by 4 guys who were apparently not from Perth, asking where a good place to go out was around here. I don’t really go out to bars and such much so I had no idea, but Ellen suggested the Hula Bula bar. They were quite talkative so we got to chatting. Apparently one of them was from Tasmania. He wondered if Ellen and I were “together” (which of course we said we were, despite both having boyfriends). Then the conversation went something like this:

By this time two of the guys including the surfer are looking kind of impatient. Either wanting to go get drunk already or insulted that we had no idea who the pro surfer was. Or, more likely (I think), the surfer dude isn’t particlarly fond of his friend bragging about him to random girls on the street.

“Yeah! How else do you think he gets in everywhere with those shoes?”

Before they went on their way the guy said that the surfer’s friend just died. We expressed our condolences and then parted ways. Of course after that we Googled various Australian pro surfers, half expecting them to have been lying, and Ellen finally found him: Ace Buchan. Never heard of him. But if by some chance you stumble across this when Googling your own name (as you do) and if it was actually you - sorry about your friend, I hope you’re ok.

Ellen invited me to come see Slovakian ballet with her at the Perth Concert Hall, and this was on Sunday. It was awesome! It was nothing like ballet at all, but a series of native dances that involved the following:

It was a very entertaining show and the brochure, too, was entertaining. One of the dance descriptions was “Young men doing amazing things with flails” - I couldn’t wait to see that one.

One of the most memorable dances for me was the poppy dance. The women were dancing this one and it reenacted growing poppies, then eating them and falling asleep.

The costumes were so colorful and apparently they had costumes from every part of Slovakia.

One of the things that impressed me most, however, was the band. They were just amazing and I think there was one point where they received bigger applause than the dancers themselves. They had some amazing solos.

Afterwards Ellen’s dad’s friend was talking to me about Slovakian gypsies in bars and about how their music was so beautiful that it could suck the soul out of you. I want to hear some soul-sucking gypsy music now, to see what it’s like.

Then some of the dancers came out and we took photos with them. Here’s mine:

Afterwards Ellen and I went to Miss Maud’s for dessert and then headed home. It was a great night! I now want to learn traditional Ukrainian dance. I reenacted the “ya!“s that the women were making to C in the car and he almost swerved off the road. 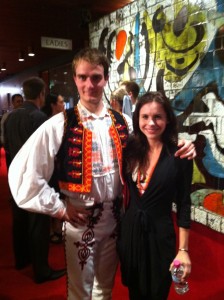 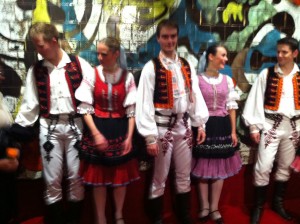