I am not an FPS player. 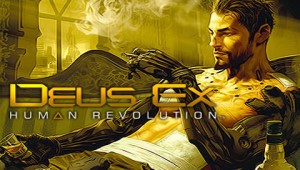 That is, I wasn’t until I read the game plotline for Deus Ex: Human Revolution. I’ve been excited about FPS storylines before, namely Mass Effect. However when I actually tried playing Mass Effect I didn’t really get drawn in. I mean, I did…but a particular gameplay element that annoyed the heck out of me pulled me out of the story and put me into frustrated-and-just-want-to-go-away-now mode.

Now, not being an experienced FPS player, I kind of suck, so it’s taking me quite a while to get through the game. I’ve put in about 10 hours of gameplay so far and I’m only to the part where SPOILER I’m sneaking through the FEMA factory after seeing the perps from the first attack (the one that left me dismembered, killed my ex-girlfriend, and turned me into a totally awesome cyborg, but which I’m apparently pretty grumpy about). /SPOILER

The feel of the world blows me away 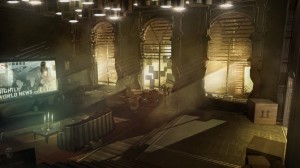 I’ve written before about how there are some books that pull me into their world and story that I dread turning the last page. It’s upsetting, being immersed in an amazing world and then getting to the end and being ripped out of it. That’s what the world of Deus Ex: Human Revolution feels like to me and it has never happened with a game before. With MMORPGs it’s easy - the world just doesn’t end. You can keep exploring, keep fighting new people, keep doing more quests. With a more linear game progression and storyline like that of an FPS, you know that there will be an end. And it’s upsetting.

I kind of suck, but not as much as I thought I did

The first attack…before you even get your sunglasses to view the UI with your health bar etc…killed me five times. FIVE TIMES. I started off on the hardest difficulty and kept moving down to the easiest until I finally got to the beginning credits. Thankfully, it wasn’t just because I suck - after playing around with the graphic settings and getting the game to run more smoothly staying alive and getting headshots became considerably easier. I’m now back up to normal difficulty.

I killed a bum and a prostitute 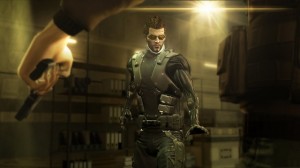 But it was an accident. Actually, I think these two accidental murders really did something for the story. Opening a door to find a guy with his back to you in the doorway, not being sure whether he’s holding a gun or not, mistaking him for a gangster after a split second of uncertainty, and stabbing him to death as a result just adds another layer of conflict and depth to the game for me. Admittedly, I didn’t want to stab him. I wanted to strangle him until he passed out, but held the Q key down a fraction too long.

The prostitute, too, was an accident. I was involved in an altercation with some local gangsters and while walking around to loot the dead gangsters' bodies afterwards I noticed that a prostitute had gotten caught up in the action. She was dead, so I took her stuff (can’t remember if she had anything).

I love that Deus Ex isn’t about bloodbaths and killing people left and right. I mean sure, that’s an option, but the game is very well suited for sneaking around stealthily, finding secret hidden passages to avoid being noticed by guards, quietly knocking people out and hiding their bodies, etc. I still kill people. I just usually find ways to do it more quietly. Except for the aforementioned case of the prostitute.

This, coupled with the amazing storyline that drew me in in the first place, is what keeps me on the edge of my seat. 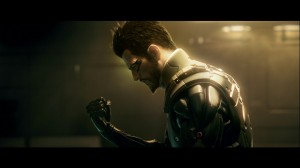 I am extremely appreciative that Eidos made Adam Jensen attractive. I kind of wish they got Troy Baker to do Jensen’s voice (I’ve had a thing for him ever since I heard him in this Bioshock voiceover clip…eh…disregard the part where he berates the crap out of his co-star to make her cry), but everything else about Adam Jensen is just impeccable. None of that Duke Nukem crap. I don’t know what those aug haters are talking about in-game. I mean, tall, dark, handsome, WITH ROBOT ARMS?! Does it get any better than that?

I’m not an idiot, I know that this game would mostly be targeted toward males. I’ve tried FPS games where it seemed like the developers almost tried to make the main character look generic and average and I’ve tried FPS games where developers went way over the top with the steroids and exaggerated manliness. Adam Jensen has to be one of the most good looking and attractive PC game characters I’ve ever seen in my entire life. Yes, even better than Seifer.

The MAIN thing that annoys me about Deus Ex

Adam Jensen is fracking sexy. If I have to play a male character with no option of going female, that’s fine. But if you’re going to make me play a dude, especially if he happens to be the epitome of hotness, I want to be able to look at him.

Do you know when you can view Adam Jensen in third person? When climbing or in cover. As a result, I cover a lot.

The NPCs seem pretty dumb sometimes. I can walk through a police station, aggro a few cops while hacking into a detective’s office, kill them, wait for my alarm level to go down and keep walking around the station and chat with other cops like nothing happened.

I’m playing Deus Ex: Human Revolution on PC. Sometimes the UI doesn’t respond as well as it could (eg clicks not registering during dialogue). Sometimes when in the main menu, clicking on menu options with a mouse doesn’t work at all and I have to press “Enter” instead.

Will I finish the game?

At this point if I don’t finish Deus Ex: Human Revolution I have a feeling it won’t be because of anything Eidos did wrong, or because of the game losing me in some way. If I have to leave this game unfinished it will be simply because I do not have enough time to play anything. I am doing my best to make as much time as I can for this game and when I play, the hours just fly. I have a feeling there will be a lot of sleepless weekends over the next few weeks.