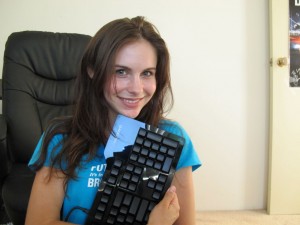 I ordered a Das Keyboard Model S Ultimate Silent via PC Case Gear on Monday and picked it up today (it actually got here on Tuesday, but I wasn’t home and missed the delivery).

First, let’s just establish what the tone of this review will be straight away. I’ll just summarise:

What made me get a Das keyboard

I got a Razer BlackWidow mechanical keyboard (Cherry MX Blue switches) a few months ago and I love it. As a freelancer I work on-site at a couple of different places, using their PCs. Ever since I started using the BlackWidow every other keyboard has felt squishy and slow - like trudging through a desert with your fingertips. Finally I decided that enough was enough. I’ve been looking at the Das for a while and have read great things, so this was the logical choice. 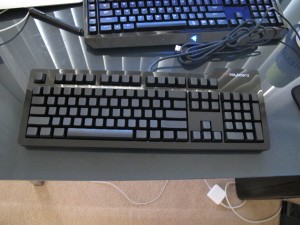 For funsies. Actually it’s because I think typing efficiently is a great skill to have and think that blank keys will help me get faster and more accurate. Also it just looks badass and I obviously want to impress all my friends.

What’s in the box

There was not much in the box other than a small black wipe for the keyboard, a piece of paper with Installation instructions (there is no installation…you just plug it in), and the keyboard itself.

The Das S Ultimate Silent has a glossy body at the top and a matte body underneath. The keys are matte. I hear some people complain about stains on the glossy surface, but so far I don’t mind as I’m not actually touching it much at all as I type.

In general this keyboard is very traditional looking unlike my BlackWidow. No flashy glowing LEDs (except for caps lock, num lock, and scroll lock). There is a subtle Das Keyboard logo on the upper right hand side. Except for the fact that every key on this board is completely blank, it would definitely blend in in an office environment. In fact I expect it’ll blend in anyway and that people won’t even notice (or not straight away) that there’s anything weird about it at all.

The Das acts as a USB 2.0 hub, with two ports on the right hand side. To use these ports one must plug in two USB connectors into their PC (however one also comes with a PS/2 adaptor included). Unfortunately I found out that when building Adam I obviously didn’t set up all the USB ports correctly, so neither my front facing USB ports nor my PS/2 port actually work. In fact on the entire case only two USB ports are actually functional - one of which is being used for the mouse. This means that I’ll be opening up Adam tonight, but until then I just didn’t make use of the USB hub and plugged in one USB to use the keyboard itself.

This keyboard feels much better than the non mechanical keyboards I’ve been using. It feels more snappy and precise. However, I have to say that when comparing the brown switches to the blues of the BlackWidow I prefer the blues. The blue give more tactile feedback and feel much clickier in general. The regular non-silent version of the Das does come with cherry blues and if this keyboard was not being used in an open office I would probably opt for that instead.

The Das weighs 1.36kg. So it’s definitely not intended to be a portable keyboard, but…well…in my case it will be.

My highest speed so far has been on the BlackWidow and that was 145WPM. Usually my average is 100-125WPM. I did a TypeRacer test with both the Das Model S Ultimate Silent and the Razer BlackWidow and found that my speed today is pretty much the same on both. I think one of them was 125 WPM (Das) and the other 126 WPM (BlackWidow). I took video of both below to compare sound and general attributes. As you can see the Das took a bit of getting used to feel-wise (quite a bit of backspacing), but was ok in the end.

Looking back at the video the two keyboards seem to sound much the same in terms of volume. I think this is because I still have to get used to not bottoming out the keys. In addition when I’m doing a race on Typeracer I tend to tense up a bit and start bottoming out - something I’ll need to work on. The Das is definitely audible, but does sound much softer and less abrasive than the BlackWidow as I type right now. Anyway, here it is:

Just a couple of cons

My backspace key makes a very slight but audible creaky noise that is slightly annoying. It’s not something a normal person would notice just hearing you typing, but as someone who will be using this keyboard for hours on end almost every day on-site, it is definitely there and it is definitely not very pleasant. 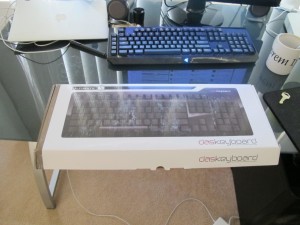 “Silent” not labelled on the box

When I first unpacked this thing I was afraid PC Case Gear sent me the wrong model because nothing on the box said “Silent”. In fact the box mentioned “Clicky” several times, which is exactly what I was trying to avoid noise-wise by purchasing the Silent model. I called up PC Case Gear who said that the Silent version of the Das keyboard is marked by a brownish-greenish vertical stripe running down the left hand side of the box. Silly me, not knowing what a brownish-greenish stripe meant…I really think Das should consider putting “Silent” on the box to avoid confusion.

The actual keyboard cable on the Razer BlackWidow is much nicer than the cable on the Das. Both my Razer BlackWidow keyboard and Razer Lachesis mouse come with this fabric-y twined type cord which is pretty thing and feels/looks awesome. The Das cable is much a much thicker rubber material. Not a big deal and not something that would keep me from buying a Das of course, I just prefer Razer’s cables.

Other than that…no complaints. The brown switches are not my ideal choice, but necessary to keep typing quiet when working in an open environment and a million times better than the rubber dome keyboards I’ve been using. At home I’ll keep using my BlackWidow with its snappy blues and on-site I’ll switch over to the more subtle Das with its browns.

Let’s just say the chances of me ever going back to a non-mechanical keyboard are slim to none.