Those who follow me on Twitter probably noticed the slew of Rift tweets over the past few days - mostly achievement tweets that are sent automatically from the game when I do something awesome. This is a long-overdue post about RIFT - a new MMO by Trion Worlds.

I have been playing RIFT since Open Beta. The basic premise of this MMO is that you are either on the Guardian side or the Defiant side. There are things called rifts opening up, spawning monsters from other planes. The Guardians killed off all of the Defiant, but did not have the strength to fight Regulos - the big bad guy. The Defiant invented machines to resurrect their dead and the Defiant player is one of these resurrected “Ascended”. As Defiant, you start off in a world that is charred, dismantled, on the brink of destruction and after a few first missions you are sent back to the time when the Guardians have not yet destroyed the Defiant. Your mission: change history and save the world. That’s just the Defiant storyline I went through when I created my first character. The Guardians fill the brains of their devoted sheep followers with twisted, biased stories of heroism on their parts. Fools! Unfortunately I am now playing Guardian - it was peer pressure, I swear! But it’s ok, I’m still having fun (and I have a horse named Duke!). 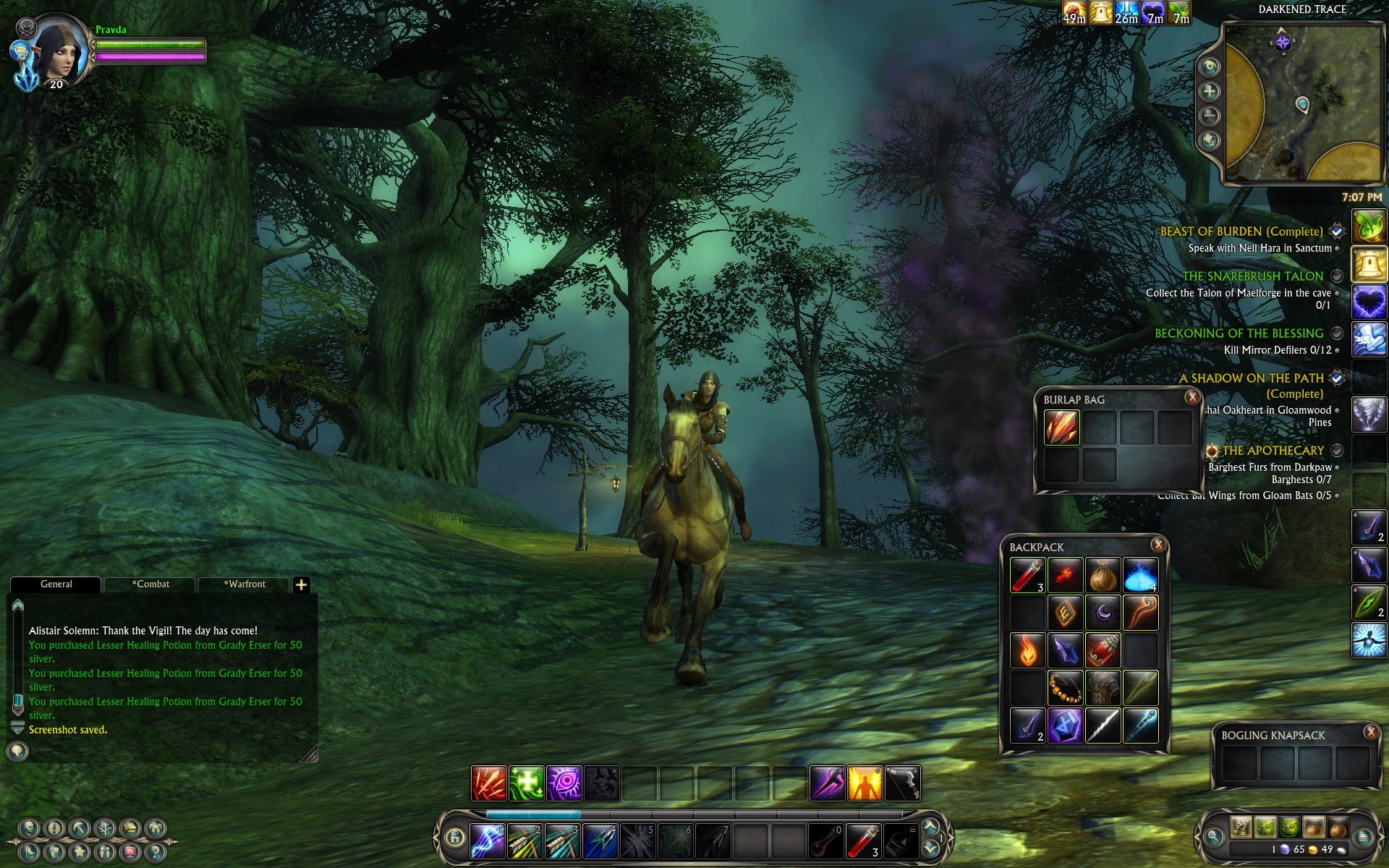 Things I am not thrilled with: 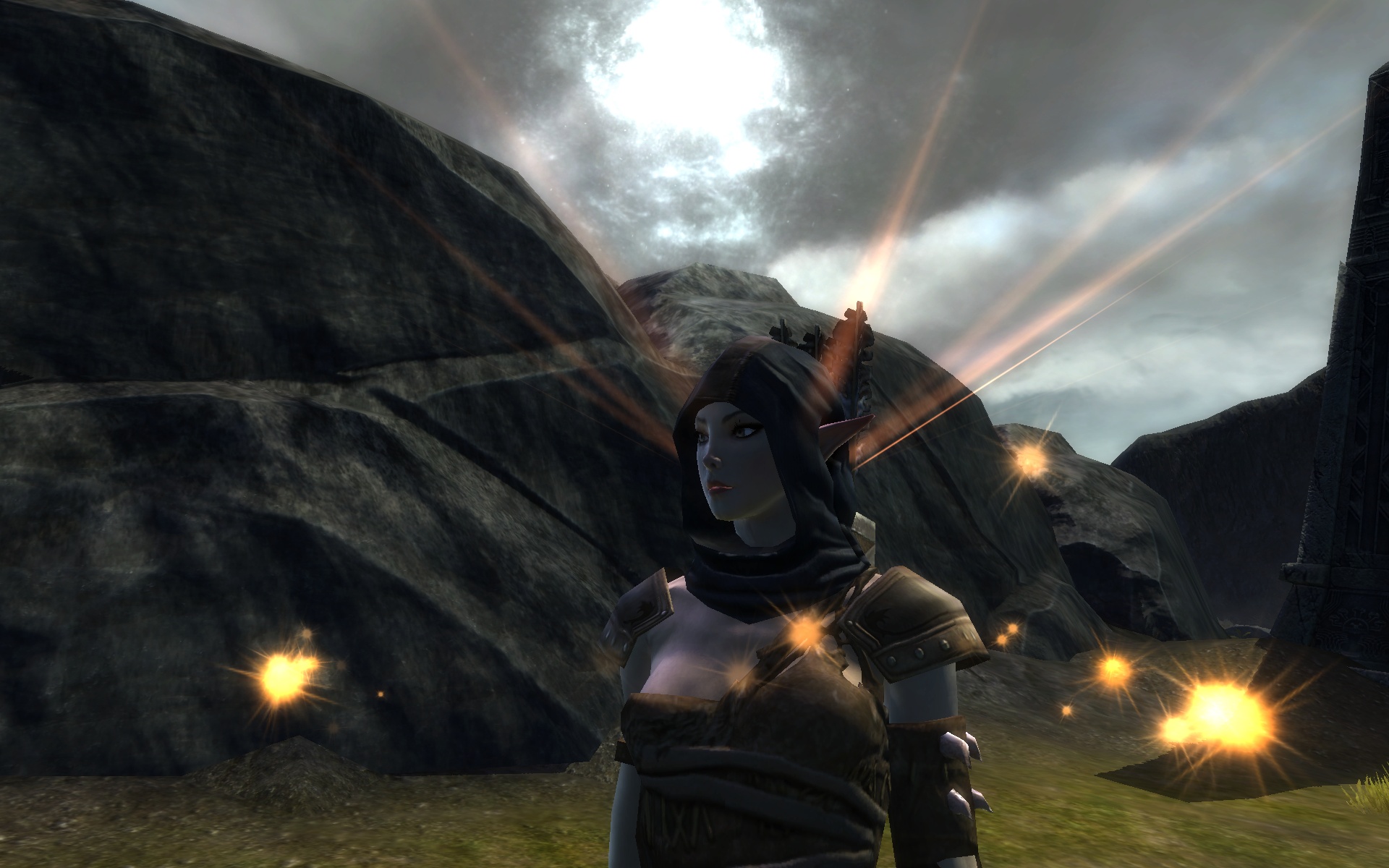 [/caption]By far the most fun I have in MMOs and the main reason I love them so much is the PvP aspect. I can go around killing monsters any day of the week - it’s when you test your skills against other players that the adrenaline rush kicks in. When I build a character for PvP I usually don’t follow the most effective pre-made builds which can be found online. I may love beating other players to a pulp, but for me thinking of my own ways to distribute my skill points is half the fun. So really, my builds are often messy experiments rather than killing machines, until I stumble on one that really is a killing machine.

Rift has four warfronts, each with its own objective. So far I’ve only done the Black Garden warfront. The objective there is to capture the Fang of Regulos and hold it for as long as possible. Holding the Fang gives your team points, and the first team (Guardian or Defiant) to reach 500 points wins the warfront. I am also playing on Dayblind, a PVP server, so when I get higher up there in level I’ll start venturing into Defiant territories to start killing some Defiant tech-heads.

There are a lot of complaints on the Rift forums about PvP being unbalanced. Both Guardians and Defiants seem to think that the other side has a huge advantage. In reality, the two sides seem pretty balanced to me personally. Defiants may not have enough clerics (that’s what they say), but they’ve certainly kicked our butt in Black Garden more than a few times, and vice versa.

Let me begin by saying that I’m not following a pre-made build. I’m just picking and choosing how to spend my skill points as I go along, getting a feel for the character and my play style. The great thing is that you can re-arrange your points and souls later on down the track.

I’ve been playing a Bard/Marksman/Riftstalker. The bard, to me, kind of looks like the jack of all trades master of none type of character. Actually, I think I remember getting the same impression of the Druid in WoW (but I didn’t like WoW and didn’t play it enough to be able to talk about the druid with any authority, so don’t take my word for it). 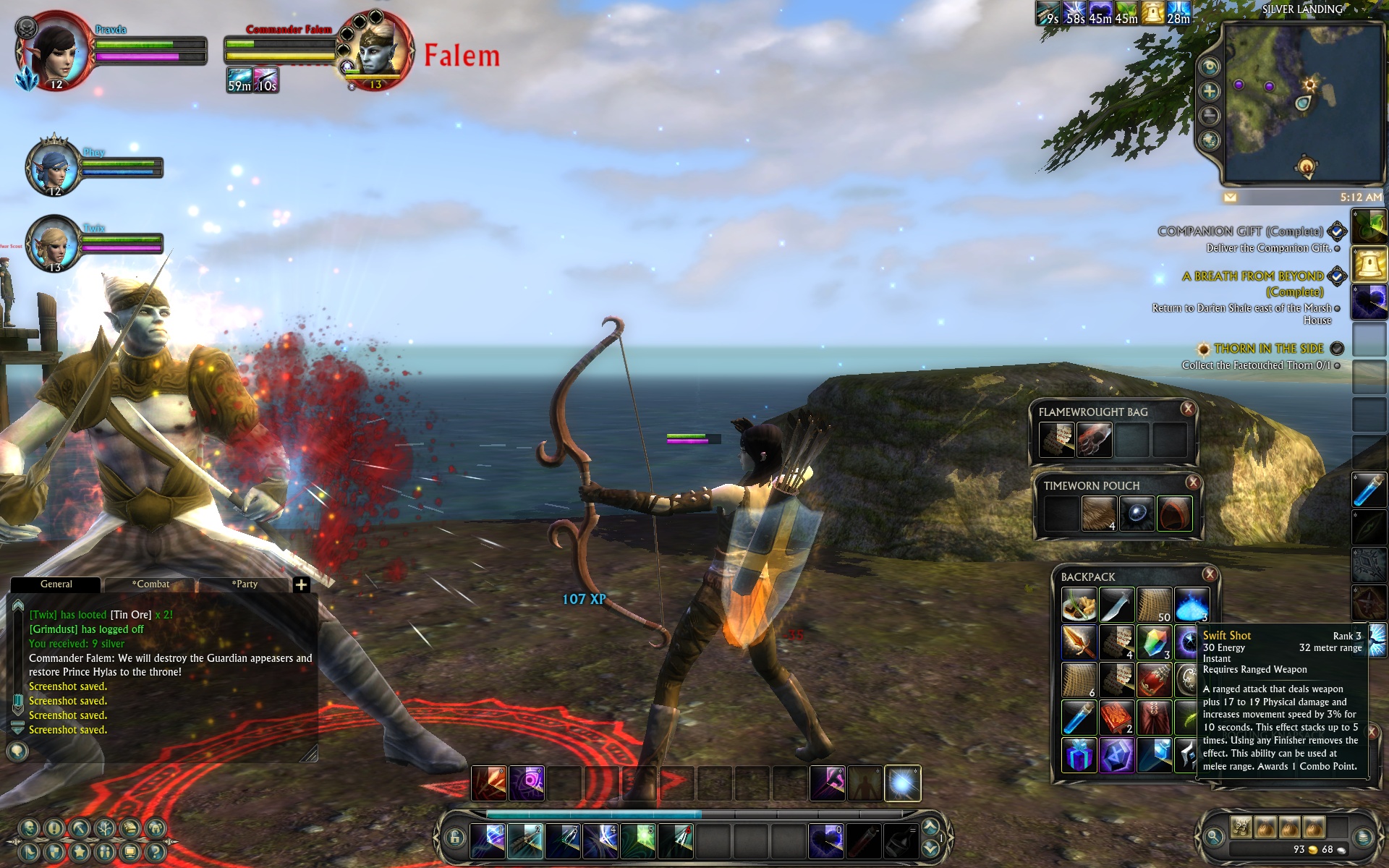 [/caption]In terms of play style - I certainly don’t end up being the highest damage dealer in PVP Warfronts, but I end up towards the top in the healing department. So far my heal spells are party-side AOEs, trickling health to the entire team over time. In other words, if the opposing team was going for one specific target only, it probably wouldn’t be enough to keep them alive just yet (not with the skills I have unlocked at level 20 at this time, anyway).

The other great thing about the bard is buffs. I have a variety of anthems and motifs that raise attack power, defence, etc for the entire party or raid.

I really like the look of the defensive abilities of the Riftstalker, but am trying to spend more points in the offensive Marksman skills. Ideally, I will turn into a self-healing damage-dealing PVP machine. But for now I’m happy to keep playing around and experimenting with where my skill points take me. 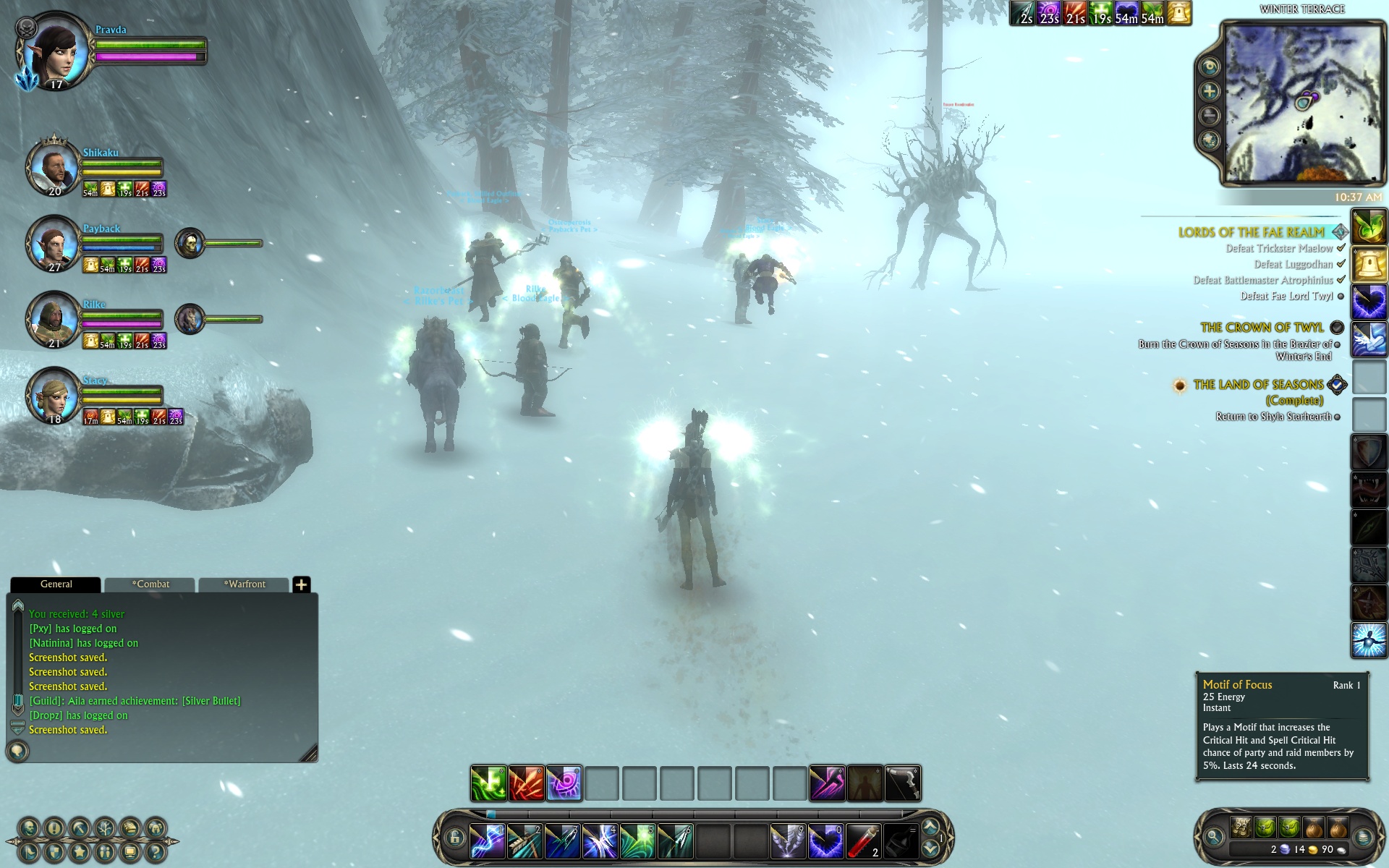 [/caption]So far I’ve only been to two dungeons - Realm of the Fae (ROTF) and Darkening Deeps (DD). It took me about 15 minutes to find a PUG for ROTF. This was not because there was a lack of groups forming for ROTF, but because they were all specifically looking for healers or tanks. I was uncomfortable labeling myself as a full healer as my bard is more of a buffer/assist healer. In the end I did end up in a PUG where I was the only healer and we actually did quite well despite the lack of a cleric.

Finding a group for DD was easy - I actually saw groups looking specifically for bards to assist the main heals, which was right up my alley.

I mentioned above that the Rift art style doesn’t really do much for me. I should specify that I mostly mean the character models here. The scenery, on the other hand, sometimes takes my breath away. A few days ago I ventured into Gloamwood, a Guardian Contested zone. The eerie, gloomy feel the zone gave me was awesome. It reminded me of curling up with an old book next to the window as it storms outside - like reading a scary story. 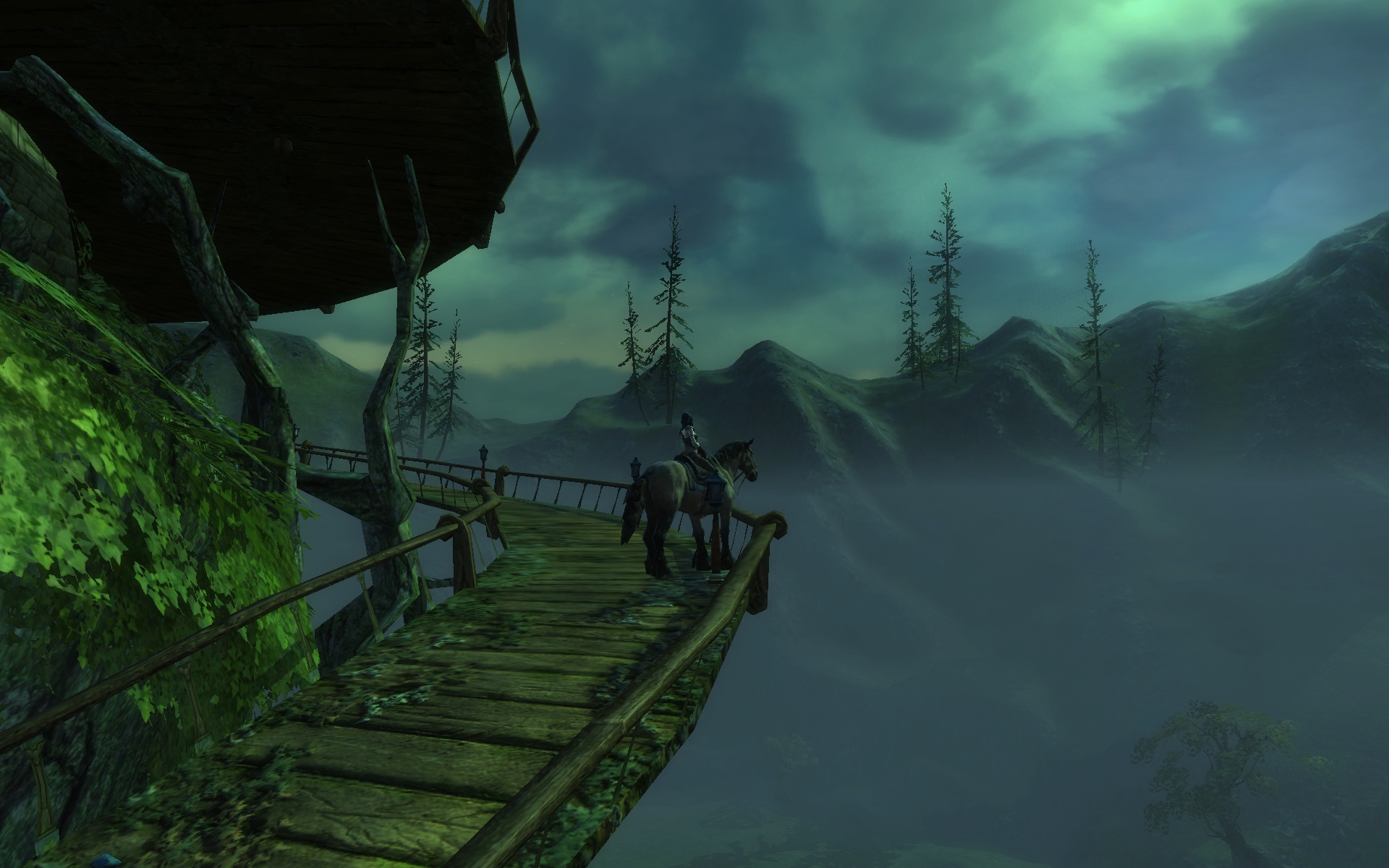 I think RIFT is an awesome game so far, but I am only at level 23. I am looking forward to participating in more PVP warfronts and in-world PVP. PVE is a bit lacklustre to me, with boring quests, but PVE is just not what I play MMOs for, so I have a feeling any PVE campaign in any other MMO will give me the same impression. My plan is to play Rift until Guild Wars 2 is out. My loyalty to Arenanet remains.