Over the past few days I’ve been processing my thoughts about the Guild Wars 2 Beta Weekend Event, which was now a couple of weeks ago.

I am not going to talk about the good parts in too much detail here (though I’ll mention my favorites). There is already plenty of ranting and raving online about how good this game is. I hold ArenaNet games specifically to a high standard and was confident that they would make Guild Wars 2 an awesome game. Suffice to say that after waiting for this for 5 years, I was not disappointed. However, there have been some things that I didn’t like during the Beta Weekend Event, or things that nagged at me, minor annoyances. We already know Guild Wars 2 is awesome. What we need ANet to do now is make it even more awesome by addressing the current problems or things that are just not that fun. I’ve put together a list of 3 things that I thought were bad and 3 things that I thought were good. I could keep adding more points for an eternity and still not cover all of my thoughts on the game, so I’m sticking to 3 in each category.

(Note: I stuck to PvE only in this BWE, so no PvP will be mentioned)

3 things that kind of sucked

When I first saw the overflow mechanic in action I was convinced that this is an awesome system to handle server queues. And it is. But there’s a problem. First, let’s go over how the Guild Wars 2 overflow mechanic works:

In theory this is awesome and in practice this could be awesome. For me it was awesome as I’m a bit of a lone wolf when it comes to exploring MMOs for the first time. I prefer to play on my own until I get the hang of how the world works and then start teaming up with people. So for me, transitioning to and from overflow was pretty much a seamless experience because I wasn’t getting separated from my friends. On the other hand, people who were playing together found themselves constantly ending up on different servers from each other as they were pushed into overflow. For a social game (you know, MMORPG and all), this is a big problem. The good news is that ArenaNet has apparently already acknowledged the issue and will hopefully be reworking how overflow works to allow people to keep playing together.

In a sense overflow in Guild Wars 2 reminds me a lot of districts in Guild Wars, except more seamless (or it will be when groups can stay together).

I played a Norn Ranger in this BWE. I don’t know how the Norn PvE campaign compares to the other races, but I thought the voice acting and dialogue were really bad (cheesy and lame). Looking back on my screenshots, after I’ve forgotten the voice acting, the dialogue doesn’t actually seem that bad, which leads me to think that it’s the voices that made the experience cringe-worthy. Example? Just imagine this said with the lamest voice and intonation possible: 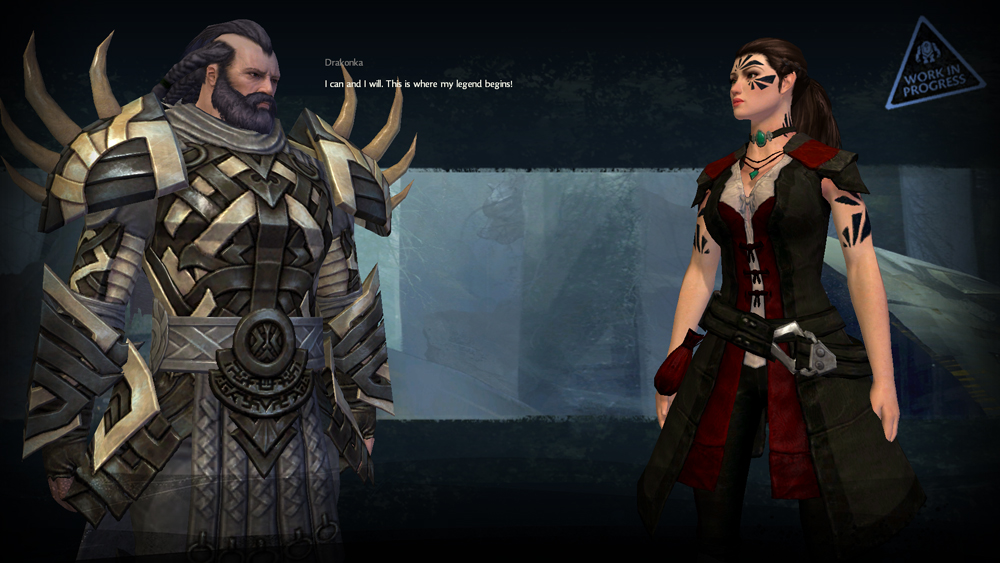 After a while it either got better or I stopped noticing it so much, but in the beginning this was just really really bad.

Don’t get me wrong - the dynamic events are really cool. However, after a while they just began feeling repetitive. It was really fun to complete them once, but then you just kept seeing them come up in the same locations. Part of you wants to go again for the sake of finishing it because you’re just a little OCD and most of you is frustrated that damn it those weird cave monsters are attacking the bear shrine again. I think that triggering different kinds of dynamic events at particular locations might improve this. Then at least you won’t know exactly what’s coming, and you’ll have common events, rare events, super difficult events, etc at the same places. You’d be curious to see what’s coming next. But I don’t know - maybe this has already been implemented during the later stages of the game? Someone please enlighten me.

3 things that were really cool

There are too many of these to list them all, but here are a few things that stood out to me:

ArenaNet is trying to make questing better, and getting there

Or rather, almost get rid of it altogether in its current form. Some of the tasks I had to complete in the beginning stages of playing my Norn included but were not limited to: 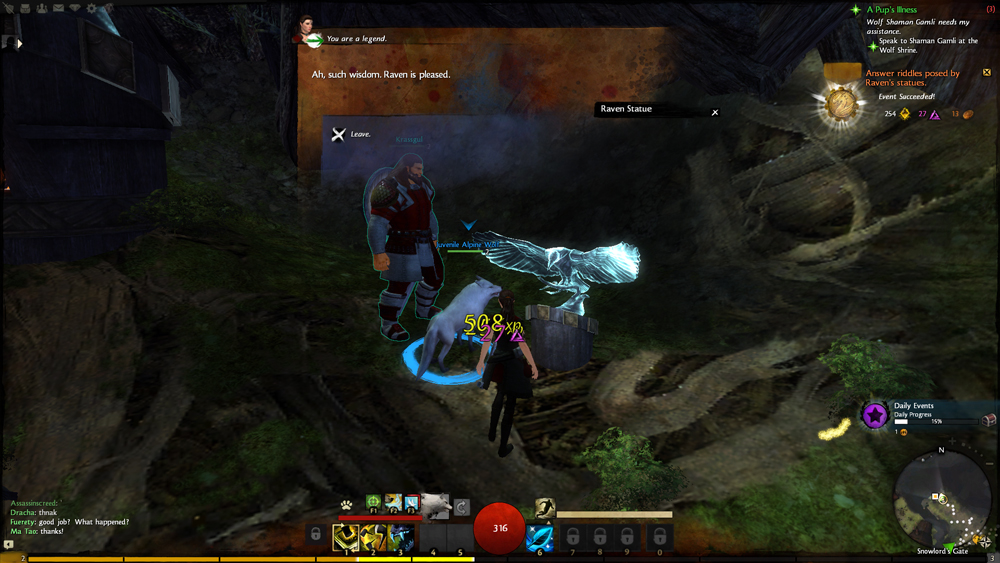 The art and music, heck the world in general, blew my mind

I love the art style of the game and quality of the graphics. The level of customisation for the character is awesome (I spent maybe 30-40 minutes just perfecting my Norn’s look -.-) The environments are breathtaking and the music is just…just…pure frisson. [caption id=“attachment_48050” align=“aligncenter” width=“675” caption=“Yeah, that’s a giant snow leopard statue."] 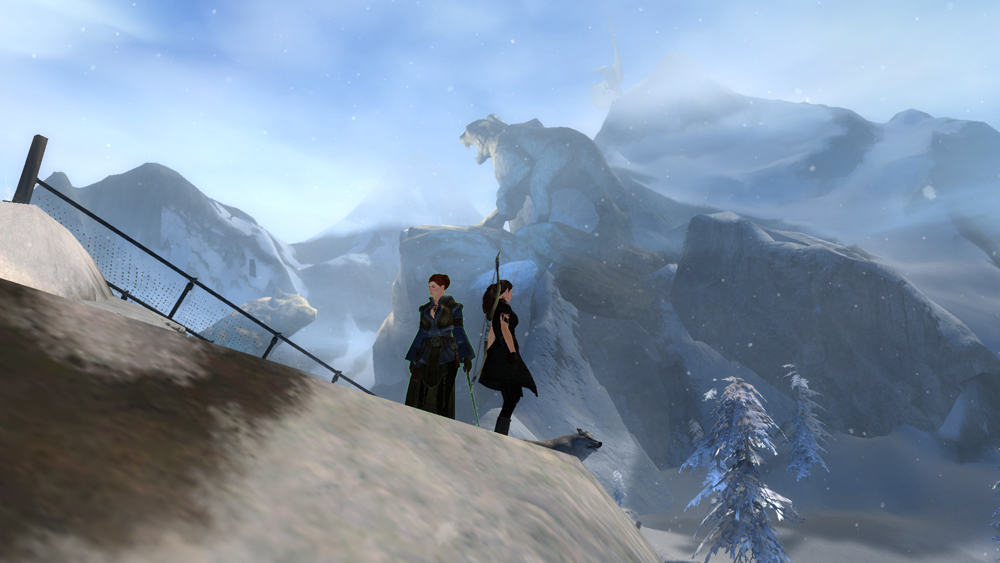 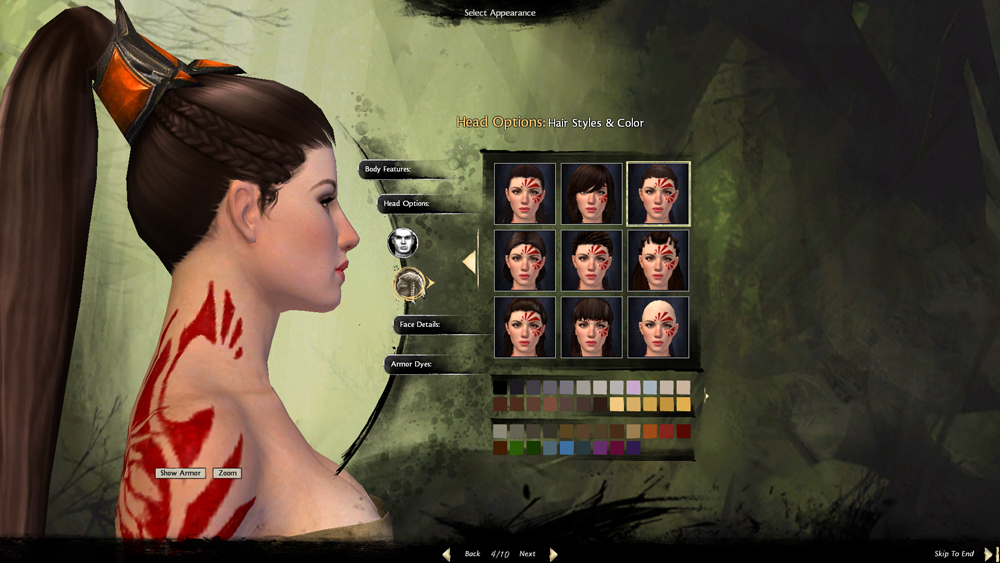 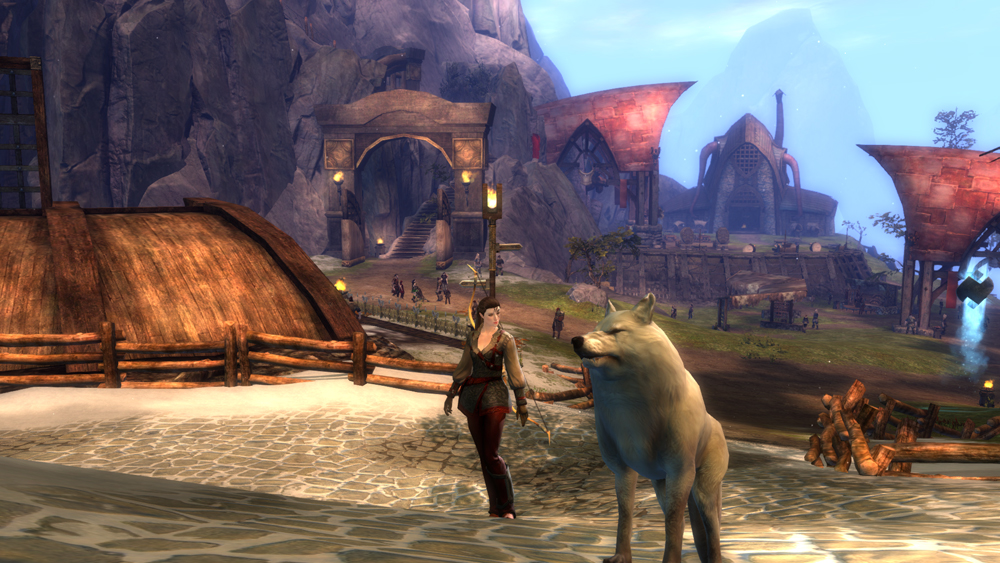 The combat, as a ranger, is immensely fun. It’s not just about spamming spells over and over. It’s about movement and positioning and directing your pet. And let’s not even get into pets! Ravens (yes, they actually fly, not those walking Moa birds from GW1), wolves, bears, and other awesome selections. But I’m getting off topic - only 3 good things are allowed here. So. Combat. Weapon mastery is awesome - you learn weapon-based skills as you use the weapon and gain proficiency. The fluidity of the movement while casting is awesome. The animations and attack visual effects are awesome. The downed state thing I’m still a little on the fence about, but it’s not a complaint.

[caption id=“attachment_48052” align=“aligncenter” width=“675” caption=“Don’t mind me, just fighting a giant worm AND LOOK AT THAT MODEL IT IS SO FRICKING COOL”] 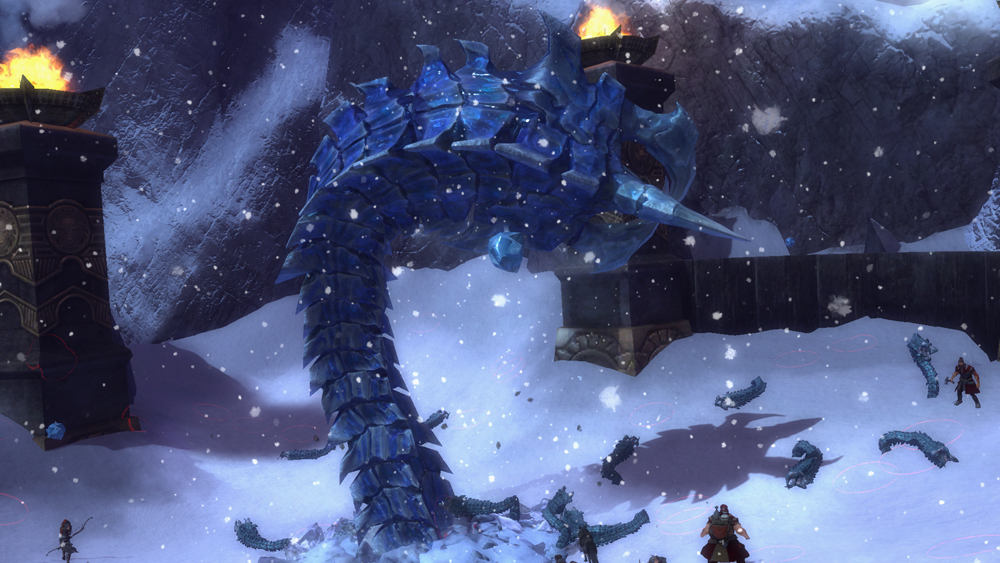 I just hope they have another BWE soon. Next time I’m trying a Necromancer.