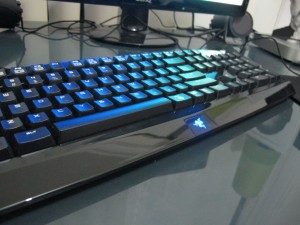 I’ve had my Razer BlackWidow mechanical keyboard for a couple of weeks now, so figured I’d put up some thoughts/impressions.

The feel of this keyboard is amazing. I have always been a fan of the shallow keys with little to no tactile feedback. Think Apple keyboards. Requiring a lot less effort to press all the way down, these tend to not tire out my fingers after long bouts of typing and also allow me to go faster. That is, before I tried the BlackWidow. Unlike the rubber dome keyboards I’ve been using all these years, the Razer BlackWidow is a mechanical keyboard with Cherry MX blue switches. This was my first foray into mechanical keyboards. The BlackWidow is the opposite of everything I thought I liked. The keys are big and raised and the cherry blues have distinct tactile feedback on each press down. It only took me a short while to get used to the fact that I do not have to bottom out each key for the stroke to register. And when I did realize this, it was like a whole new typing experience. It’s like my fingers glide across the keys, barely pressing and yet still firmly feeling each key’s response. As a result my fingers do not get tired, I can type faster, and I get a nice springy feel out of them.

As a test I did a few TypeRacer sessions with the BlackWidow, getting up to 145WPM (granted I haven’t been able to replicate this yet). Average test WPM on other keyboards for me has been between 100-130. 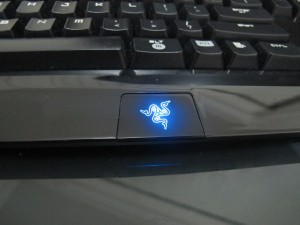 Personally, I think this keyboard looks awesome. The glossy black reminds me of a piano. I love the typeface Razer used on the keys and the glowing Razer logo under the space key is a nice touch (although it would’ve been awesome to be able to change the glow color to match the Razer Lachesis mouse). The lighting in the Razer logo can cycle through several different levels or be completely deactivated.

The Razer BlackWidow is quite hefty in terms of weight (1.4kg), which I like. It feels nice and solid. This is not a portable keyboard - you will not carry this thing around on a regular basis unless you’re bringing your entire rig to a LAN or something.

Razer has shifted the function key row slightly to make the F1 key sit exactly in line with the W key. This took a little bit of getting used to, but is actually a much more efficient way to do it as you can reach straight up to reach F1 with your middle finger when playing a game. I’m planning on remapping my Typhoon trigger in Deus Ex: Human Revolution to F1 instead of F2, allowing for more streamlined activation (I’m guessing this remap is possible…I hope).

This keyboard is loud. There is a stealth edition available in both the Razer BlackWidow and the Razer BlackWidow Ultimate, but as I needed something fast and didn’t have time to look around I went for the standard. The typing noise has gotten a lot quieter as I got used to not having to press the keys down all the way for keystrokes to register, but it is definitely still very audible and would not be suitable for an office-type environment (or even really a shared study area). Personally I don’t mind the noise itself - the main thing I have to get used to is not being able to hear people moving around the house while I type. Usually I can hear someone walking down the hallway or approaching my door with plenty of time to hide the porn (just kidding. Or am I?), but I now have to be extra vigilant. 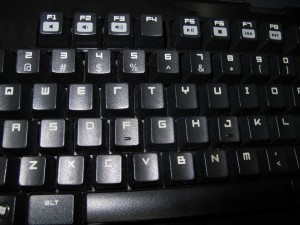 The keys on my version of the Razer BlackWidow are not backlit. Backlighting is nice, but this does not bother me as I touch type. I do still have to look down every once in a while as I’m still getting used to the different position of the function row, but other than that it’s not a problem.

The BlackWidow Ultimate comes with a USB port. This would have been really nice to have.

No mic and headphone jacks

Unlike the Ultimate, my standard Razer BlackWidow does not come with onboard microphone and headphone jacks. Also not an issue for me, just something that may have been nice to have.

The Razer BlackWidow has been an excellent introduction to the world of mechanical keyboards for me. Next time I’ll perhaps go for a Stealth/quiet version, but other than being unaccustomed to not hearing what’s going on in the rest of the house the noise does not bother me. Perhaps the only problem I have now is that every other keyboard I use just seems so rubbery and mashy compared to my BlackWidow at home. Typing on anything else kind of feels like my fingers are trying to trudge through a sand dune.